It’s the autumn equinox, the day length being equal to the night. The official start of autumn. From now on the the nights will be longer than the day, the days growing shorter until the winter solstice when things start to turn around.

Often, here in the west at least, September is a lovely month and it’s hard to believe summer is over. This year it’s easy to believe winter has come already. The leaves have been turning on the trees for some weeks and they’re starting to fall now.

The tomatoes in the greenhouse and polytunnel are very near the end which means we’re going to have quite a few green fruits. Some years I’ve had tomatoes going until November but not this year.

I did get a good tip for tomatoes which may well be worth a try. I quote from Mr Pritchard:

As for storing them, I usually cut off most of the leaves from the plants and pull them up, roots and all, and hang them upside down in the greenhouse and shed, so the tomatoes are still attached to the plants thus keeping them alive a little longer and then pick them when they turned red. By doing this we had tomatoes right up to the new year.

Some of the emails I get are very revealing. What I thought was common knowledge just isn’t anymore. We’re extremely pampered people when it comes to food. Want fresh tomatoes in January or February? Pop into your local supermarket and they’ll be there. Imported from as far afield as Israel. Yet I get emails asking how to grow tomatoes at home to put on the table in the depths of winter.

When I visited Flavourfresh a major British supplier of fresh tomatoes back in 2008, the manager was talking about how they could move into all year round production. They had 10 acres of greenhouses producing tomatoes in Lancashire. He wanted to go to year-round production generating their own power from on-site windmills to power LED grow lighting.

They’re actually very green; their green waste was given to local farmers to compost and use on the land, biological pest controls were used and bees brought in for pollination.

Yet at heart, it is industrial agriculture. Chemicals were imported to feed the tomatoes hydroponically, Fossil fuels heated the greenhouses to the optimum temperature producing carbon dioxide which went into the houses to increase production. They did have fantastic production levels with grafted plants producing up to 27 trusses per plant.

Is this the way to go, though?

I was reading an article on the National Geographic website about Holland’s agricultural industry. They have 36 square miles of greenhouses for starters. It’s a real mix of high-tech production with the latest green technologies. Completely artificial environments using low or even no inputs.

They’ve developed disease resistant strains of various vegetables that are incredibly productive using something called molecular breeding which is a bit like GM but doesn’t use genes foreign to the species. A tomato that produces 150 lbs of fruit being one example!

It’s to farming as we know it as a modern robot operated car plant is to a blacksmith. I’ve always thought of myself as embracing technology but I feel very uneasy when I look at this. Man the species, may have intelligence but nature and evolution has had hundreds of millions of years to create systems whose subtleties we are only beginning to grasp. 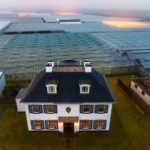 This Tiny Country Feeds the World

The Netherlands has become an agricultural giant by showing what the future of farming could look like.

If you get stuck behind a pop-up window asking you to subscribe, try refreshing the page in your browser.