Our local National Vegetable Society group went on a trip up to Lancashire to visit the Flavourfresh nursery. Nursery hardly seems an adequate name for a ten acre greenhouse complex, producing 4 tonnes of tomatoes in a day.

The Flavourfresh nursery lies just inland from the coast between Blackpool and Southport on a flat plain dotted with glass house complexes and polytunnels crisscrossed with drainage ditches and raised roads with many of the open fields given over to vegetables. We noticed the soil in many of the surrounding fields was a dark fine loam, the reason for this later. 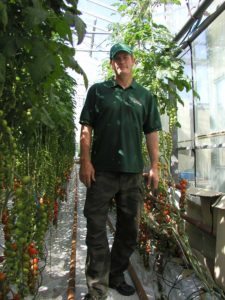 When we arrived we were greeted by the manager there, Colin Lovelady pictured on the right, who gave us a tour of the facility. We started in a large shed to the side of the glasshouses where bags of chemicals were stored for mixing in large vats which then led into a pumping system to distribute around the site.

Unlike the home grower, adding a few capfuls of tomato food to a watering can and one for luck, this was exact computer controlled growing to proven principles. In a small hut in the shed a computer monitored inputs from all over the site, controlling feed and water delivery, the opening and closing of vents and heating to keep the temperature a constant 25 degrees.

We then moved to the end of the process, the packing shed. We might measure our production by the pound in a week, these chaps are producing 4 tonnes of tomatoes a day. They’re checked, graded and weighed before being packed for delivery to the supermarkets like Asda, Tesco and Marks & Spencer.

Then we got into the actual growing areas. The first thing that grabs you is the sheer scale, row after row of tomatoes stretching into the distance to either side of a central pathway that was, thankfully, shaded.

Down between each row were the cast iron heating pipes and these double as railway tracks for the carts pushed up and down by the pickers and the mechanical lift carts that raise the more skilled trimmers to higher levels to enable them to trim and tie in the vines.

Usually we stop tomatoes in the greenhouse at 5 or 6 trusses but these vines stretched on and on. The tops were about 16 feet high with the vines extending horizontally below giving up to 30 trusses per vine.

The plants are variations on the domestically available Piccolo but grafted onto a strong rootstock to feed the incredible demand and each plant allowed to develop two leaders. We sampled some of the produce and it was surprising how much variation there was between these varieties, thicker skinned varieties are less prone to splitting but you taste the difference.

Bio-security is taken seriously, like a hospital there are alcohol rub dispensers at the entrance and various points in the house. They’re determined to avoid disease spread between plants should it break out.

Pest control is primarily biological, but they are allowed to chemically spray if the pests are winning twice in the cycle. Pollination is carried out by bumble bees who fly around. I asked why they didn’t use honey bees and Colin explained that the honey bee had a tendency to defend the hive and swarm. With people working in an enclosed environment with the bees they just wouldn’t be safe.

Crops are produced for nine months of the year, from February to November, although Colin told us he would like to produce all year round. To do this it would be necessary to use growlights since tomato production is dependent on light levels and this would require a lot of power. They would like to use wind turbines to produce this power but planning objections were holding back the plans.

Although there is no way you could describe them as organic producers, I was surprised and pleased to see how they are ecologically responsible. Excess water and feed are not dumped, they are recycled into holding tanks and re-used. Accurate temperature control minimises the use of energy and even waste CO2 from the boilers is pumped into the house to increase production. You’ll remember from school biology that plants absorb CO2 and give out oxygen.

Finally, noticing the skips full of trimmed leaves and sideshoots, I asked what happened to the green waste. They basically give this to local farmers who use it as a mulch on their fields. This was the reason the soil in some fields looked so well, the addition of volume amounts of compost, recycling the chemical fertiliser back into the land.

All in all, it was a fascinating day and one tip applicable to the home grower, that alone made the trip worthwhile, was this. They never cut off extra leaves, sideshoots or trusses when harvesting. Instead they snap or tear them off as cut edges bleed, weakening the plant and possibly allowing botrytis to develop. The torn edges leave a scar but dry faster and are safer. I never knew that!

Photo Below: Just one of the many rows of tomatoes. 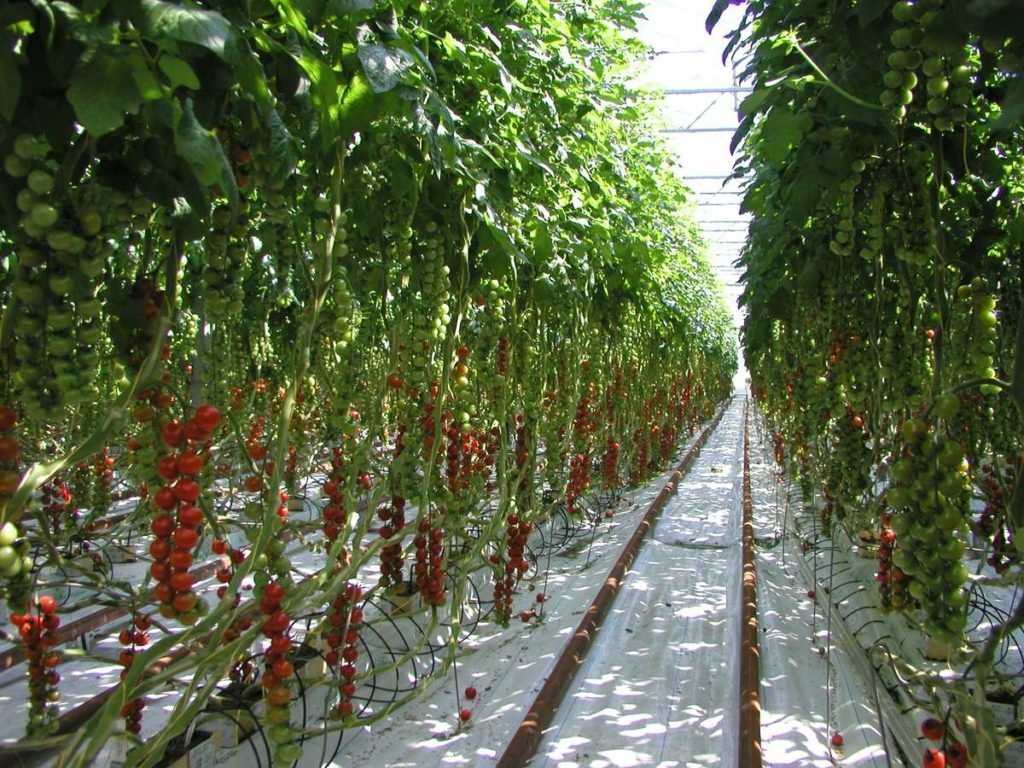 Rows of tomatoes in the climate controlled glasshouses