Changes on the Site

Sad Loss for the Site

Sadly one of our plot holders died last week. Alan had a well cared for plot up in the top corner where he’d just spent a lot of effort constructing a really nice greenhouse with running water taken to it when he suffered a stroke a couple of years ago. This left him unable to manage his plot although he wouldn’t accept that and planned on returning. I’m afraid we didn’t think he’d return, but Larry arranged for his plot to be kept tidy in case a miracle came to pass anyway. I’m sorry that the miracle didn’t happen.

Our site member Poshbins has given up the plot. Busy lives and a back injury have forced them off. I’m told they’ll be growing some veggies at home, Mrs Poshbins was talking about converting some lawn. Whoever gets the plot will have some weeds to clear but it’s a lot better than when Poshbins took it on. Big thanks to them for donating the posh compost bin to yours truly. Now I have two posh bins!

New On the Site

Had a long chat with the new people on plot 2, they seem to have a sensible attitude and plan on taking their time to get it back into order. Plot 2 was well looked after by the previous tenant, dug over deeply with a lot of organic matter added to the soil, hence the fantastic weed growth since he gave it up.

Unfortunately plot 2 really suffers with water logging due to the runoff from the main path. They’re getting the drainage sorted and will be putting some land drain pipes down the side, which should cure things long term.

Too Hot on the Plot

Catching up with all the site news, chatting to Gianni and so forth hardly left me any time to do anything on the plot, but it was cloudy, hot and very, very close so I wasn’t in the mood to do a lot in any case.

I did get the Mantis

out and ran it over the raised bed at the top of plot 29. The soil in there had become quite compact under the 2″ layer of compost on the top and by the time I’d Mantis’d it, it was lovely. Rich, dark, crumbly soil – good enough to put on your sandwiches.

Planted out some more lettuce at one end and firmed down the rest before sowing spring onions. I’ve opened packs of Ramrod and North Holland Blood Red which went in. The North Holland Blood Red (that’s a catchy name) are my favourite spring onion. Apart from the colour, red, they’re tasty and if you leave them in the ground they just bulb up. I’m not that impressed with Ramrod but may as well use the packet up. Waste not, want not.

I also sowed some of the ever-popular White Lisbon. OK, not an exciting variety but they are consistent and good performers. Finally sowed some French onions. My command of French could best be described as “Le rubbish” but I think these are a bulbing spring onion.

You do get a huge amount in the packs from France compared with the UK. Then again, the price of land is so cheap there in comparison to ours and a garden veg patch is often larger than two of our allotments put together.

Sunday on the Plot

Sunday was another hot day but not as close and sunnier than Saturday, which was nice. I was down there from 1pm through to 9pm with a quick break home for a drink and more liquid supplies. By the end of the day I was a bit of a zombie and the last half hour was spent searching for my keys (shed floor, under a pot)

I made a good start on the compost bin area, the black smaller bin was emptied onto the centre bed on plot 29 where the sweetcorn is going, and the new posh bin assembled in its place.

I started filling this with the bits that hadn’t quite rotted down from the top of the black bin and the large open bin to the side. Since I had quite a few rose clippings from home and woody bits, borrowed Gianni’s incinerator and burnt those. The potash will be recycled.

I was left with a green barrel compost bin over so gave that to Therese on plot 1. She’s been down most of the weekend and is getting to grips with her patch now but the lady she was sharing it with hasn’t made much of an appearance this year. Some discussions due between them.

Talking of ladies, Clare complained that her photo wasn’t on the site, so being obedient, I grabbed the camera and snapped away. You can see the photo here: Allotment Photographs May 2008

Photo Below: The new posh compost bin (it’s the tall one on the right) as I’ve started empting the bin to the left. Not sure what is happening with the black bin in the foreground yet. 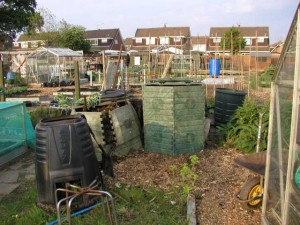 Leave a Comment Here on Changes on the Site Cancel reply