Well let’s start with the election news from Crewe & Nantwich.

So far the Tories and Labour have both told us that they are good the others are bad and don’t bother voting Liberal. However, the Liberal candidate apparently supports the Cats Protection League and fosters cats. Since we’ve got 3 cats, that’s pretty influential stuff. We also got a leaflet from UKIP. Since I’m in favour of kipping at any opportunity I thought they sounded interesting,

The big news was that I got door knocked by William Hague – I kid you not. With devastating political insight I managed to stammer “Oh, the man from the telly!” I was completely taken aback and tongue tied. He looked a little worried – mind you I was dressed in my muddy jeans and T shirt with potting soil under my nails. So this mucky gibbering idiot answered the door to him. Bet his minders got an earful!

On to the serious stuff in life, the allotment. I mentioned I’d bought a strawberry barrel, well I went and assembled it on the plot after diving into the garden centre and buying 24 plants to fill it with.

I’d had a couple of people say they hadn’t had any luck with them so I followed the instructions to the letter. Mixed perlite with my multi-purpose compost (one third perlite by volume) and Osmacote slow release fertiliser in the mix at the rate recommended for hanging baskets,

It comes with an umbrella type thing onto which you attach a net – stop that pigeon – so if it crops well, the crop will be safe. I’ve done it as the book, so if there isn’t a good crop I’ll be moaning. What I really like is that I should be able to get more than double the crop from the space. It looks rather swish as well.

I got my sweetcorn and courgettes planted out on plot 29, under cloche. Sweetcorn always benefits from extra nitrogen and courgettes produce a lot of leaf so it does them no harm either so a good few handfuls of pelleted chicken manure went on to give them a boot. Started off with 36 sweetcorn seeds in the packet of 30, 2 failed to germinate and I broke the shoot off one with poor handling. Planted out 25 as 8 aren’t up much. In fact three haven’t shown at all yet. We’ll see what the final percentage is soon enough.

Three courgettes, Black Beauty, went in. Three plants are more than enough for us. Courgettes are the most productive crop known to man, but a bit boring really.

I’d planted a row of Dorian and a row of Kelvedon Wonder. The Dorian had germinated well, nearly 100% by the look of it but the Kelvedon Wonder, purchased in France, was very poor. I’d guess as low as 30% germination.

I put up a scrambling net on each row and then decided to plant some Kelvedon in modules so I can get an accurate idea of the germination rate. Using 15 modules to a seed tray, I sowed 120. In theory, 120 plants is a 10 foot row but we’ll see what happens.

Sowed another row of Dorian direct. Drew the flat bottomed trench as usual and then gave it a good soaking before sowing. Things are actually getting a bit dry on the plot and I had the hosepipe going on plot 29.

It’s a bit strange seeing the south is getting a load of rain and we’re dry. If it carries on then I’m going to have to do some serious watering on plot 5 as well.

Photo Below: The strawberry barrel in front with the sweetcorn and courgettes under cloche behind. 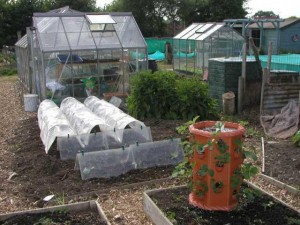