Friday and Saturday were not the best, some spits and spots of rain along with grey skies, so being a good husband I trailed around various shops in the wake of “she who must be obeyed” as we hunted carpet bargains and furniture fripperies. It all ended in tears, of course. Mind you, spending money does tend to make me emotional.

Sunday wasn’t so bad so pottered around the garden for a bit and moved the plum tomatoes, Roma, into larger pots. They’ll be going outside but I’m bringing them on as far as reasonable in the coldframe.

My squash have all failed to germinate. I’ve no idea why, the compost is the same as used for everything else and they’re warm enough (possibly too warm?) and the seed is fresh. Sowed all the rest of the packet to see what happens and hopefully get a plant or two.

Headed down to the plot to earth up the potatoes. Now the theory is that you scrape soil from the sides but my clay is not the fine crumbly stuff in the theory. It doesn’t matter, I have a cunning method with my Mantis Tiller

It has an extra set of tines for digging furrows and these break up the soil, tending to cast it to the sides.

Ran down between the rows of all the potatoes except the Sarpo Mira maincrop. These are a late maincrop, which means they need a long time in the ground to produce their large crop. It also seems they’re slow to get away and their haulm (foliage) is the smallest. So these weren’t ready for earthing up.

After running the Mantis up and down, I put fish, blood and bone on the row between each plant to give them some more food to carry them through and a scattering of pelleted chicken manure to add extra nitrogen.

Potatoes are a greedy crop. They produce a load of foliage, which needs nitrogen and a load (hopefully) of tubers which also need phosphorus and potassium. Hence plenty of fertiliser to get a bumper crop.

I was planning on taking a cut from the comfrey, wilting in and laying the wilted comfrey between the rows. Comfrey is a wonderful plant, I call my patch the compost mine. Unfortunately, Val came round and told me I needed to get home for a phone call so decided to call it a day.

There’s information on the site in the growing guides about growing potatoes and about comfrey.

Back home I was just settling down when I heard the awful word ‘frost’ on the TV weather. Surely not, I thought. Booted up the computer and headed onto Metcheck. Their forecast had changed and frost was indeed on the cards.

I pressed the red end of world alarm, pulled on my jacket and rushed around to the plot. Surprisingly for 8pm on a Sunday night, Larry and Therese were still on the site. I think Therese was giving Larry some growing tips. Larry said he thought I must have heard the forecast because I was earthing up earlier but the truth was I had no idea.

First thing was to fleece around the borlotti beans. They’re like most climbing beans, a touch of frost and they’re dead. Next I put sheets of plastic on the ends of the cloches to keep them warmer. Don’t want cold breezes going through the cloche. I’ve sweetcorn and courgettes under cloche on plot 29.

Back over to plot 5 with the lids to the raised bed coldframe with the three first early potato plants in. Popped those into place and then dug around in the back of the shed for the fleeces.

I managed to cover most of the first and second earlies with fleece and some fine weave netting. The netting isn’t ideal, but may just make the difference between frosting and not.

Unfortunately, there wasn’t enough to cover the Sarpo Mira. They’ll have to take their chances. Note to self: get more fleece in the end of season sales.

Back home where Val had her flowery things in pots huddled together on the patio by the house fleeced and, in some cases, bubble wrapped. Squeak the cat thought this was great fun, you can go on top and then go under the fleece. Obviously an adventure playground.

I closed up the coldframe, protecting the Roma and the home greenhouse. Having done all we could, that was it. Then, just as I was dropping off to sleep, I remembered the runner beans in pots up at the top end, the cold end, of the garden. Oh well, time to sow another lot if they haven’t survived.

They’re predicting another frost for Monday night. May is always a sneaky month. Seems lovely then BANG a frost strikes.

I took a few pictures on the plot, which are on the site here. Photo below: Borlotti Beans wrapped in fleece. 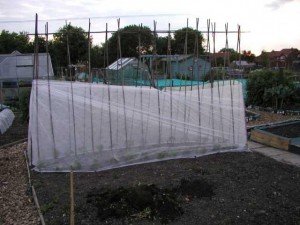 8 comments on “Earthing Up & Frost Warning”