Well after the disappointment of August my hopes for a good September came to nought. We had a few good days but generally it seemed to do nothing but rain. With the best will in the world, some jobs like grass cutting just can’t be done in the wet.

It’s been quite warm all month so the grass has been growing quickly but mowing when it’s wet is so painful. The mower clogs up and you spend more time unclogging it than mowing.

The warmth and wet has helped the weeds no end. Hoeing when wet is nearly as difficult as mowing and there is an added problem. The idea of hoeing is to pass just under the surface, cutting the weed’s roots away from the top. When wet, the hoe – even when sharp – drags the weed up still attached to the root. So the weeds just carry on growing. 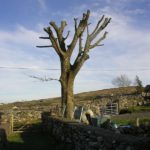 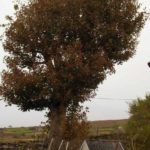 Back in 2011 we had a sycamore that was overhanging the gas tank severely pruned. When it was in leaf it swayed alarmingly and the prospect of it coming down onto the tank was worrying.

The chap who did it – climbing trees with a chain saw is not for me! – said it was sound so it could stay but needed cutting back to keep it healthy. Looking at it now you wouldn’t think it was ever cut back. The leaves are turning colour and starting to fall now, soon the trees will be bare again. 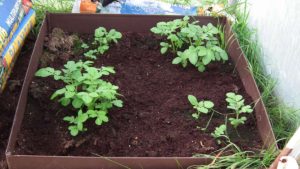 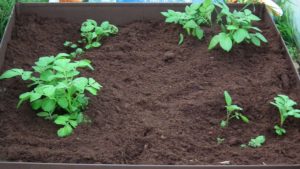 At least I can carry on in the polytunnel whatever the weather. My ‘Christmas’ potatoes are coming up. I’ve started earthing up the Duke of York but the Charlotte are a bit behind them and won’t need earthing up for a week or so.

My usual suppliers (Suttons or T&M) had sold out of second crop seed potatoes so I bought them mail order from Waitrose of all people. Waitrose have a good reputation as a supermarket but I wouldn’t use them again for garden products. The tubers were pretty ropy to say the least and one of the Duke of York was more like an acorn than a seed potato. It’s failed.

The lettuce are doing OK and I can just see the turnips, radish and spring onions popping up. Not a sign, yet, of the carrots making an appearance though. I nearly gave up on the last cucumber plant but it’s decided it’s not finished. There are three decent cucumbers coming.

The runner beans have about finished but the Cobra climbing beans are still producing. The other day I carefully went through the plants and harvested every bean worth having. The next day I found another good meal’s worth there. I’d have bet money I’d got the lot but obviously not.