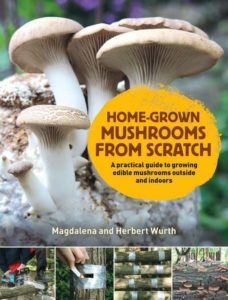 One of my favourite foods is the mushroom. A rich meaty flavour and chewy texture. Fried mushrooms, mushroom omelette, mushroom in a stew, mushroom soup – so versatile.

But growing them is another matter. I’ve read a little on growing mushrooms way back when and quite fancied the idea of a mushroom farm when I was a youngster but they’re not something I’ve had any real luck with.

I tried a mushroom kit once and that produced a few fruits but not enough to justify the cost of the kit. In fairness, it was reduced and had been on the shelf for ages. On the other hand, I’m not sure that should have made any difference.

Anyway, Filbert Press emailed and asked me if I’d like a complimentary copy of a new book they’d just published – Home Grown Mushrooms from Scratch. One of the perks of running this web site!

The authors, Magdalena and Herbert Wurth, have a deep interest in mushroom growing and their many years of experience shines through on every page. Herbert Wurth’s career began as a chemist at the Vienna University of Technology with a project that involved him in breeding, propagating and growing mushrooms. This became a life-long passion.

This is a very comprehensive book, it covers everything you need to know about growing edible mushrooms whether at home or even as a business growing unusual gourmet varieties. There’s even a section on starting a small business selling specialist mushrooms on a small scale.

To round off the book, they’ve included some interesting recipes to make the most of the unusual mushrooms they show you how to grow. Shitake, Oyster, Woodtuft, Lion’s Mane, Jelly Ear, King Stropharia are all covered!

What I really liked was that it covers the more technical aspects of mushroom growing in an understandable way. It doesn’t dumb down but neither does it overwhelm and fall into jargon.

It’s complemented by a multitude of beautiful photographs by Magdalena Wurth, that clarify the text. Not a series of stock photographs that only serve to fill the page like so many books today.

They cover different growing methods like growing on straw bales along with detailed instructions on growing mushrooms on logs and even tree stumps. That’s something I find interesting. You inoculate the log (they explain the different methods) and after some months mushrooms magically appear.

There’s a useful section giving sources for mushroom spawn, inoculated logs and growing kits etc. Strangely, as I’ve been reading this book I happened to discover that the Organic Gardening Catalogue have quite a range of mushroom spawn and inoculants.

In conclusion, I can’t recommend Home Grown Mushrooms from Scratch enough. Even if you don’t intend to grow mushrooms, it’s a fascinating read. If you do, it’s an invaluable guide and reference.