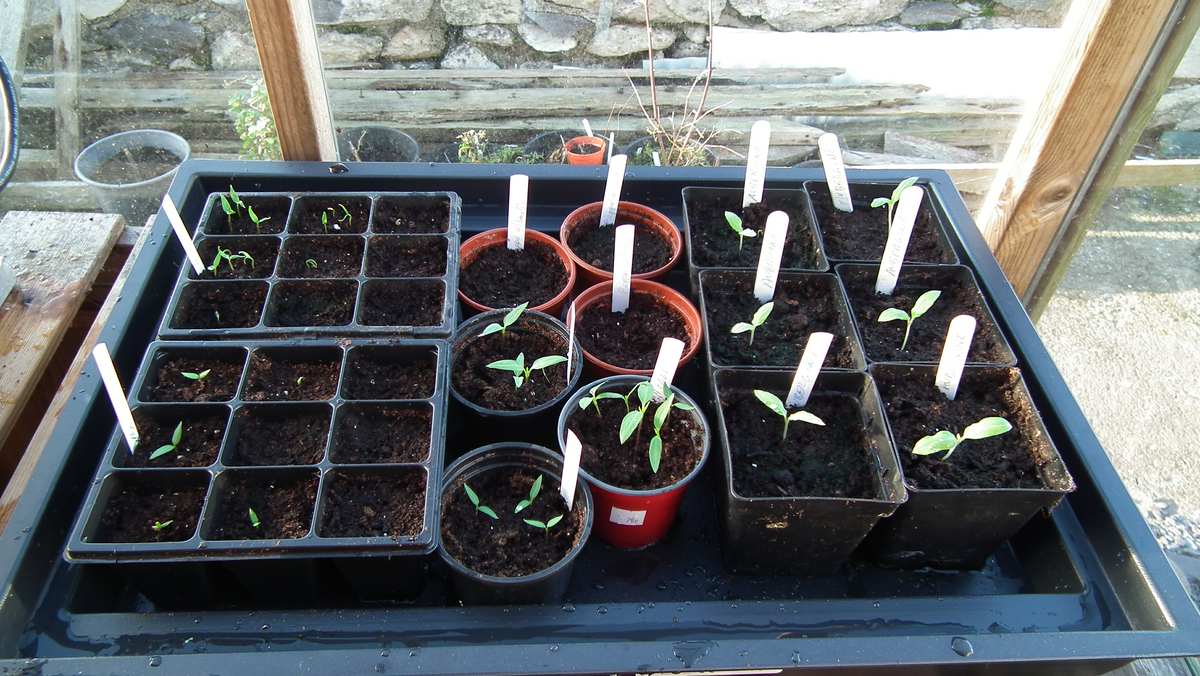 Although I’ve got a heritage Welsh plum (Denbigh) and damson (Abergwyngregyn) planted I wanted to add a couple more damsons. So I ordered a Farleigh and a Merryweather on ST Julien A rootstocks from Pomona Fruits to complete the orchard area.

Farleigh is noted as a hedgerow damson so I’m hoping it will be tough enough to do well here. The Merryweather is a bit of a gamble but the fruits are lovely. If we were less exposed, I’d grow more fruit trees but with the best will in the world, North Wales isn’t ‘The Garden County’ of Kent!

The wind has been incredible even for here where it’s often windy. It started on Sunday afternoon and just built up and up. The night was really wild, gusting over 70mph, a massive crash at 3am had me checking about with a torch. It turned out some old windows I was going to use to build a coldframe with are now just broken glass.

Val had warned me it was coming and I’d got the greenhouse prepared. The doors were clamped and an old growbag pushed up against them. Double checked all the stripping that holds the glass in and after that there’s nothing to do but keep my fingers crossed.

When the potting shed went up, the guys from Swallow looked amazed when I said I’d bolt it to the base. Then I showed them the 16×8 shed the wind blew a metre off its base despite it having about half a ton of weight in it! The winds should cease by tomorrow but I’ve not known them blow so strongly for so long as this one.

I went out into the shed to check on things and the noise of the wind was quite unnerving in there. Anyway, the good news is lots of things have germinated. I generally sow 2 or 3 seeds in a module or pot and thin out to the best seedling. It looks like I’ve had 100% germination on some but others are yet to show.

I’ve thinned down the seedlings. They seem to be doing very nicely under the growlights but there is a little problem with them causing the propagator to over heat. Easily sorted by opening the vents up full though.