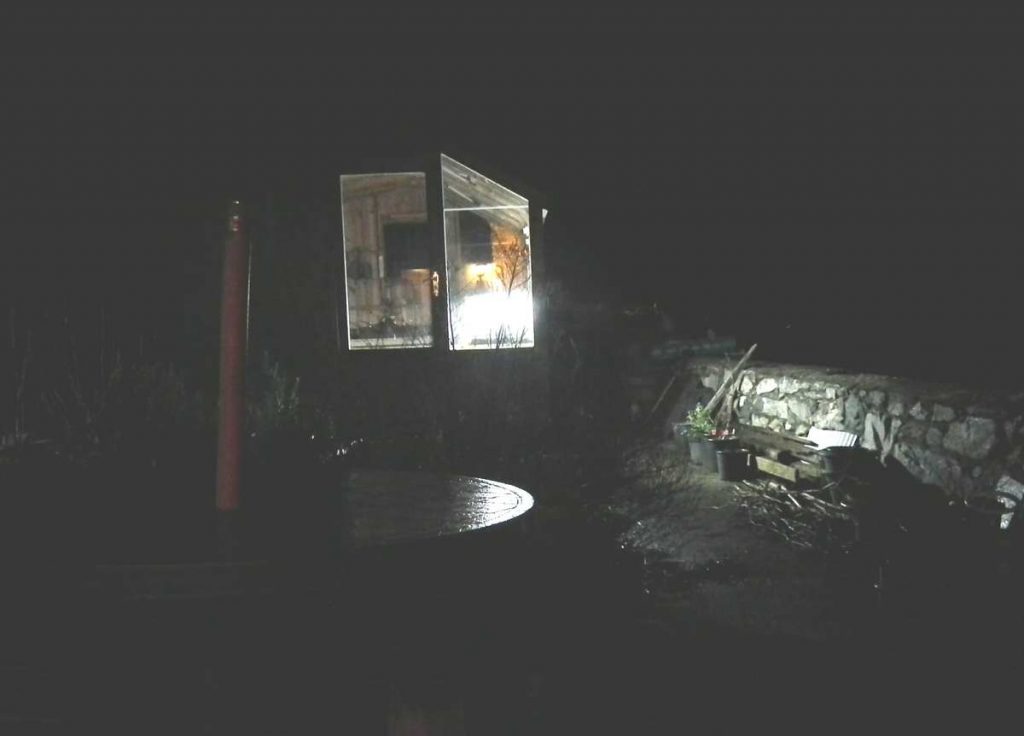 The potting shed shining with the light from the Geopod at around 6.30pm on a very dark, damp night.

Well the weather has really gone downhill and up again. Wednesday started a little damp but brightened up until late afternoon when the rain poured down and the wind got up. I suppose you shouldn’t expect much else in February Fill Dyke

The storm hit on Thursday with southerly winds gusting over 70 mph. Friday it just poured down, the power shower in the sky was on full. Clearing the new veg plot stops in this weather – once the weather improves things will move ahead but not for now. This is keep in shelter weather.

The weekend wasn’t too bad though but everywhere was pretty sodden so stuck to working in the dry.

I really don’t like using super glue, it always ends up with my fingers stuck to whatever is being mended and each other. But it does work pretty well. And repair when possible is far better than replacing things in my book.

In the Potting Shed

The lighting is now switched on with my Geopod Propagator. I’ve got it running from 7am to 7pm so extending the day length to about the equivalent of mid-March (see Day Length Chart) whilst adding extra power to the weak daylight at this time of year. I’m using a cheapo timer control off Ebay to control it which does the job.

Half of the Aubergines are through along with some chilli peppers. They’re just the cayenne variety – hot enough for us. I had a packet of Norfolk Nagra which are supposed to be registered as a weapon they’re that strong but I’ve given them to a chap who likes super-hot chillis. The sweet peppers aren’t showing yet, but I’m expecting them any day now.

I’ve also sown another first for me – strawberries from seed. They’re Sarian which were reviewed on our forums as well. Sarian Strawberry Review

Some Swiss chard have gone into modules (15 to the tray)

On the brassica front, I’ve started off in small but deep modules filled with multi-purpose compost to which I’ve added a little lime as they generally do better at a higher pH and composts tend to be 5.5 to 6.0. Sown cabbages, Hispi and Romanov along with cauliflowers Snowball and Snowcrown.

Last thing to go in are leeks. I’m doing these in small troughs, thinly sown. Last year I was really late planting out and quite honestly, they’re embarrassingly small. I won’t make the same mistake this year.

I’m planting 3 varieties – Carentan Giant 2 and Bleu de Solaise which are both French heritage varieties and a new variety ‘Anglesey’ from Medwyn Williams. He’s bred this from a Bulgarian long leek and a hardy Welsh seedling to create a great heavy leek, that is winter hardy and stores well. The Anglesey will go into modules and then into troughs to make best use of the seed.

6 comments on “Sowing Starts in Earnest”