Well it’s been one of those weeks. As the Derek the weather called it, a typical Welsh summer! On Wednesday I went down to collect the Merry Tiller after picking up the car from it’s annual service and MOT. The good news is it has an MOT and the bad is the bill was twice what I expected. 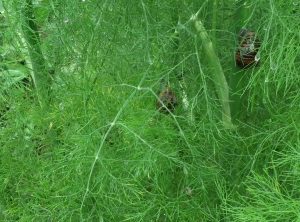 Yesterday I picked off 8 snails from this plant. Today in the rain there’s yet more climbing it.

Lucky for me they had a fully charged battery and jump leads available to re-start my heart after he told me how much. Still, he gave me a complimentary box of old car parts. There’s always bits left over when I fix engines as well.

As I headed down the 15 miles to Tremadog (Nr Portmadoc) the sky got darker and darker. It was obviously going to rain but I had no idea of what was coming. Just as I turned into Tremadog the heavens opened. Not just rain but hail at the same time.

Slowed down to about 5 miles an hour and crawled along with the hail sounding like a machine gun and the windscreen wipers failing to clear even on fast. There were drifts of hail on the road, water bubbling up from the drains and some roads had about six inches of water.

I waited for 10 minutes outside the repair shop until the rain slowed and then made a dash for it. Still got soaked though. I knew I was in real trouble with the bill when he got the complimentary box of old bits out.

Anyway, it’s running well again. Hopefully that will be the last spend on that for another 10 years.

The garden is happier for some rain but it’s brought out all the slugs and snails. There’s quite a few slugs but this year must be the Welsh year of the snail. I found 18 in the greenhouse alone. Outside I put slug pellets down and in the morning they’ve gone – eaten by the ravenous hoard. They crawl off and die but the next wave are slithering along behind them.

The most annoying thing is watching a large juicy strawberry turning from green to red until it’s ready to pick only to find it half eaten and a slug munching away.

Pulled my Back – Again

Decided to do a little tidying up and organising in the stone shed where I keep the compost. Moved the two remaining 40Kg large bags of compost which were a bit of a struggle. I must have done something because I’ve got really bad sciatica.

It makes moving around painful, my right foot feels as if it has just been hit with a baseball bat if I do any lifting or bending. Moved a couple of decorative golden conifers into a border from pots and was hardly able to move when I came in, so I’m on light duties for a while.

Working hard on updating the poultry pages site now – hopefully that will be online by mid-July. Val’s been adding recipes onto the site. She’s found a load of recipes from when she ran a vegetarian cafe at Keele University. You don’t have to be a vegetarian to enjoy them though!

She’s also reorganising the various sections the recipes are in, which should make it easier when you’re browsing. For example, if you fancy making a cake those recipes are listed together – or perhaps a curry tonight? The curries and rice dishes have their own section now.

I also found four snippet videos I made with Mark Hampshire as a trial for Marshalls. Marshalls had put them on Youtube so I’ve embedded them in pages with some further information – you’ll find them in here: John’s Gardening Tips