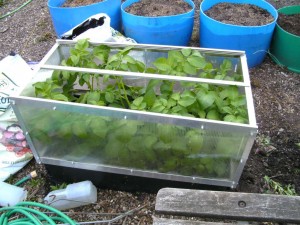 Finally got my Sarpo in. Just three rows and it only took half an hour to plant them. I used my Mantis

to dig the rows out with the furrow attachment. Usually maincrop potatoes go in at 30″ between the rows but I’ve given them a bit more room. Sarpo are very vigorous and produce a lot of haulm so I think the yield will be better with the extra space.

The rest of the potatoes are popping up now. Hopefully we’ll get away without a hard frost now but I’ve plenty of fleece if need be. The swift planted in the coldframe raised bed are doing well, just about flowering so I think we’re near getting some new potatoes.

I’ve started taking a cut from the comfrey patch that I’ll just lay between the rows. Wonderful stuff, comfrey. Chock full of nutrients – take a look at this article if you don’t know about it. Growing & Using Comfrey

Allotments are a bit like the Forth Bridge, by the time you’ve got to one end the other needs attention. Having got most of the weeds off plot 29, the little devils were coming back on plot 5.

I’ve got deep raised beds down at the bottom, wet end of plot 5 and these were in need of attention. One has nothing in, so it only took 15 minutes to hoe over but the garlic and shallot bed took nearly an hour.

I just know that if I hoed around the shallots I’d be bound to hoe one off so it was a hands and knees job. Still, not too much like hard work and very satisfying to see the crops again.

The asparagus bed was very easy to hoe off, just being very careful around the fronds and not going deep since asparagus roots are shallow. I read something about asparagus roots spreading up to 10 metres so now I’m wondering if a raised bed was the right way after all. Bit late now.

I noticed the council have been up spraying the paths as well. All the grass is very yellow and will soon be gone. I’m not a great fan of chemicals and weed killers but for some uses they do make sense.

I noticed the over wintered onions on plot 29 are a bit mixed. The white onions are growing nicely, bulbing up now, but the red onions look very feeble. I think I’ll try a feed to see if I can stimulate some growth. 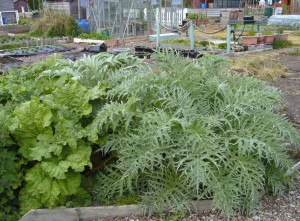 I’ve learnt a lesson with globe artichokes – they take more space than you expect to say the least. My artichokes are swamping the rhubarb now. Never mind a 3′ spacing, 5′ seems more appropriate!

Not a bad day, all told. My workload is tailing off now so hopefully I’ll spend the summer on the plot and I’m convinced we’re going to have a good one.