Last night the wind was insane, howling down the chimney and rattling the roof. Apparently we had gusts near 100 mph! I’ve got a lot of boring paperwork to do but around 10.30 am this morning took a break and a breath of fresh air outside only to realise there was a lot of broken glass lying around.

The wind had ripped the doors off the greenhouse, again. Some of the bar cappings that hold the glass in were flapping in the wind but, apart from the doors, the greenhouse was still standing. 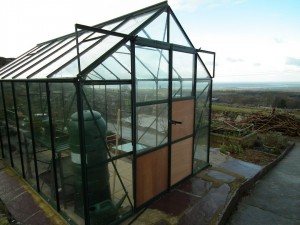 It was still pretty windy but really strong winds and rain were predicted for the late afternoon so forget the paperwork and repair the damage. Balancing on the step ladder with the wind cutting through my windproof jacket and trying to push me over was no fun at all. As I write this, my back and arms and legs are all complaining. It’s been a really hard day.

Eventually got all the bar cappings fixed and the doors back on the track but I was beginning to panic about getting it wind-tight before the next storm front hit. Happily my son-in-law came round on hearing of the damage and gave me a hand, some jobs are far quicker with two of you.

My grandson was eager to help as well. This consisted of climbing up and down the step stool and shaking the greenhouse. Little ‘un got quite upset at me climbing the steps, it was his go! Got to say, he was a help – he cheered me up. 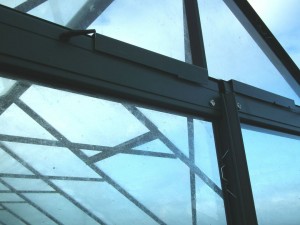 We (his dad and I) cut some replacement panes from a sheet of plywood I’ve got in the cowshed and whilst he re-glazed the doors, I constructed some parts to hold the doors at the top so even if they blow off the track they may be saved from blowing out. These were glued and screwed by the light of my head torch.

I wish I’d thought of this addition before, but I did think I was fairly secure now so I really didn’t expect to find the doors on the ground again. Considering the damage this storm has caused bringing down trees and damaging buildings I suppose I’ve got off lightly. We lost a couple of slates from the cowshed roof as well. Easily replaced but ideally we need to put a concrete capping along the exposed side of the roof. I’m beginning to think Fron Dirion, the name of our house, means ‘money pit’.

Having done all I could, I took steps and all the tools back to the shed. As if to add insult to injury, as I put the screwdrivers back in the rack, that decided to come off the wall. Some choice Anglo-Saxon comments followed and I decided it was way past time to call it a day.

As it happens, the second bout of wind was nowhere as strong as the first, for which we’re thankful. And if the wind does manage to get the doors off yet again, the plywood panels won’t break.