I’d planned to strip the glazing on Saturday morning, repair the frame and add in some strengthening bits and re-glaze by the end of the day. In practice things took longer.. surprise, surprise. 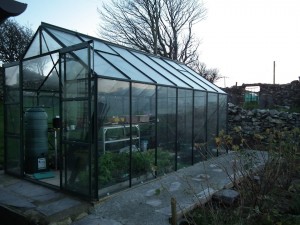 The rebuilt and untwisted greenhouse

Just getting the doors off turned into a major job as the frame had twisted and in the end I had to take the glass out of them to enable some flexing. Some of the glass came out easily but other sections were a matter of fingers crossed and fairy liquid to lubricate. Eventually it was all out without any breakages.

The cross struts at the front had actually ripped through the aluminium at the base so the only way was to use L shaped brackets screwed down into the supporting sleepers to provide a fixing point. 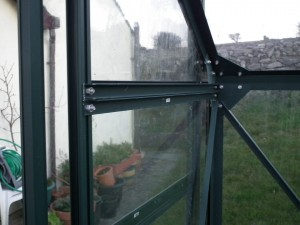 This involved the drill and just to add to my woes the blessed thing has gone wrong. Charge it up, fine. Re-insert the battery and 20 seconds later it has died claiming no battery power. After an hour wasted messing with that, get out my old corded Black & Decker with the extension cable. The drill has a 3 year warranty.. can I find the receipt? Of course not.

More fiddling around and the light was starting to fade so, thoroughly chilled, called it a day. Val reminded me I had said I was going to make some lentil and bacon soup, so no peace for the wicked! I’ve posted it over in the recipes section. It’s thick, filling and very satisfying.

Sunday started with finishing adding the strengthening bars that required drilling before the glazing. The cordless hadn’t magically repaired itself so it was an extension cable and corded drill job. Then we started the re-glazing.

The previous system just involved putting the glass into place and then fixing with spring W clips. This new system kindly sent to me by Vitavia on hearing of our wind problems is different. Small aluminium clips hold the glass top and bottom to the frame.

Getting these in is very fiddly but I think would be easy with polycarbonate glazing where there is give in the glazing sheet. Glass doesn’t really bend though! Eventually we got the knack and second half of the roof went on in half the time the first half took. 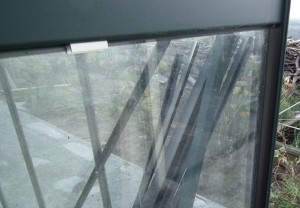 Once the aluminium clips are in, plastic strips are pushed into place the whole length of the pane, which is fairly quick and easy. It gets a bit wearing on the thumbs though so started using a plastic rounded screwdriver handle to push into place that worked a treat. Once in the glazing feels absolutely stable – this strip system is far superior to any clip system I’ve used.

Son-in-law had to go but it was starting to get late anyway. The roof is definitely a two person job but the sides are feasible on your own. I can’t ask Val for help, she’s got an awful chest cold and getting chilled is not a good idea for her.

Got the first side panel in but light was fading fast so packed away. Monday dawned with rain which kept going until late afternoon so I managed to get a few of the side panes in before we lost the light. I worked out a way to add a few more pieces to strengthen the front so I’ll fit them before carrying on glazing on Tuesday.

As things happen, it was Thursday before the re-glazing was finished but on the plus side, a job well done. Just a few more strengthening bars to add inside but they will be done inside so doesn’t matter if it’s raining. Handling large sheets of glass in the rain is not a good idea.

Fingers crossed we’ll be OK from now on and I can get back to growing.

2 comments on “Repairing the Greenhouse”

Leave a Comment Here on Repairing the Greenhouse Cancel reply