Preparing for a new shed

Friday was, as the weatherman predicted, rainy with some fair gusts of wind. The good news was the greenhouse seemed very steady with no real flexing despite the wind coming from the south east, otherwise known as the deadly to greenhouse direction! 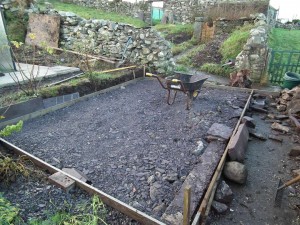 Outside we’re doing some groundworks, laying a base for a potting shed. Marking it out, removing soil and then putting in the shuttering; always checking it’s level. Finally hardcore and banging it down to firm up before the concrete can be mixed and poured.

Initially I had thought of building a shed myself. I’m fairly good at woodworking, if a little out of practice. I drew up some plans, roughly based on ones I’ve seen and costed them up. It surprised me that I cannot buy the materials to build one for less than the cost of having one supplied and that’s without any allowance for my labour. I suppose the manufacturers buy in at trade rates and I have to buy at retail. There must be a fair old mark-up on wood.

The one I’ve gone for is about the best on the market, but it will give me a lot of pleasure and last me out. It’s a Swallow Rook Potting Shed from Greenhouse Stores who were really helpful when I phoned them. It’s described as 8×10 but is actually 8’9” wide and 10’5” long! HUGE!

I plan to run power to it so we can have lighting, heating and propagators in there. Val suggested a bed for me as well. I hope she’s joking. I reckon I should be able to bring seedlings along until ready to plant out in the greenhouse and maybe grow things like peppers through in the glazed shed.

It should be ideal for overwintering tender plants as well. I’ll write up a full review when it’s installed. 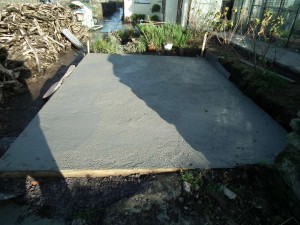 Saturday was concrete laying day, it took about 1.2 cubic metres and half a day with one mixing and one levelling. Within seconds of the first barrow load going down the cat had to run across, leaving a track behind her. Oh well, no real harm done.

The shuttering can come off after the weekend and some sheets of slate get inserted to the side to stop the soil sliding down onto the base. I think I may have to move the blackcurrants but where to put them is a bit of a poser.

Amazingly the weather is supposed to be set fair for the coming week, if getting a bit cold. Still lots to do outside and so little time as the nights close in. There’s barely 8 hours of daylight here now. Down south they gain half an hour on us but we win in the summer.