The base for the new greenhouse is in position now. I’m no great builder, to say the least, so I’ve gone for a simple system I know I can get right. The greenhouse will sit on pressure-treated 4″x3″ beams which in turn sit on concrete.

Just sitting the beams on the soil is a bit risky as soil expands and contracts with the weather and amount of water it contains. So sitting on concrete ensures it won’t move. The big worry is that the wind will lift the greenhouse and tip it over again, which is what destroyed its predecessor. 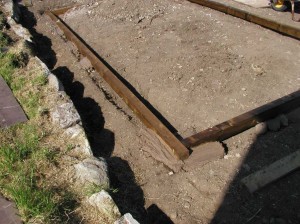 Even the weight of the base is no guarantee, in fact the base doesn’t weigh much in comparison with greenhouse. So to hold the base down we put long screws into the sides and these are covered in the concrete. I’m also running a path down the sides which is concrete with inset with pieces of slate we had lying around.

If the wind rips up this greenhouse, then I give in!!

The critical thing with the base, apart from staying put, is that it is square and level. Level is easy enough, I’ve got a large spirit level. A check on each of the four sides confirms they’re level and placing the spirit level diagonally across each corner confirms all is well. 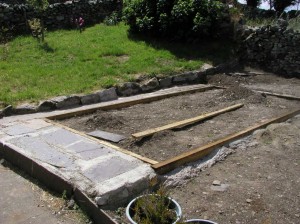 Greenhouse Base with path to front and side. Nearly finished

Square is fairly easy to confirm. Obviously the long sides are equal length as are the short but it only takes a bit of moving around to make the corners out and twisted. To ensure a rectangle is a rectangle, simply measure across the diagonals. So long as the diagonals are equal, then the rectangle has 90 degree corners.

Incidentally, about a zillion years ago, I was taught Pythagoras’s Theorem at school. The only reason, at the time, was to pass the maths exam. Some years later a builder explained a way to check a right angle that he called a ‘three, four, five’.

Simply put, mark one side at three units, the other at four units and, if it’s a right angle then the diagonal will be five units. It doesn’t matter what the units are, feet or metres, so long as they’re all the same. Finally a use for the ancient Greek theory. 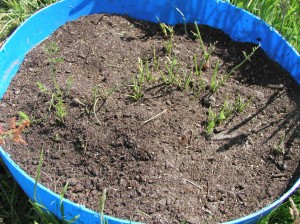 I’ve got, or rather I had, some carrots growing in barrel slices. Now I’ve had problems with slugs grazing off the seedlings as fast as they appear but I’d actually got a couple of beds doing well. Then most of the foliage vanished. Just stalks poking up forlornly from the soil.

The cause wasn’t immediately obvious. This was beyond slug or snail damage, unless we’ve got giant African snails! A relative keeps them, btw. I had nightmares for weeks after I saw them.

Rabbits became the favoured culprits. Everyone knows bunnies eat carrots, ask Bugs Bunny. But our cats are very good at defending the plot from rabbits and in this warm weather they’re outside and on-guard most of the time.

Anyway, I didn’t need to call in CSI Gwynedd in the end. I stood in the answer, a fresh sheep dropping. Yes, a ewe or two have got in and munched my carrots. How, I don’t know but  they’d best watch out if I catch them. In the meantime I suppose I could try putting jars of mint sauce around to scare them off.

2 comments on “Building Greenhouse Base”

Leave a Comment Here on Building Greenhouse Base Cancel reply