One thing we’ve always liked is having fresh herbs available for cooking. Cooking lamb, pop out and get some sprigs of rosemary or perhaps pull a couple of bay leaves for a stew.

We’ve a nice sheltered and sunny plot to the south side of the house so that’s the obvious place for the herb bed. Many of the herbs are fairly slow growing and, just planted out, would soon be swamped with grass and weeds unless we spend a lot of time weeding. 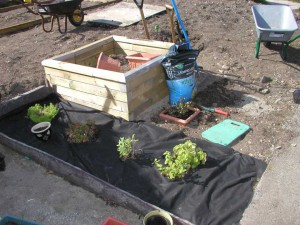 So the answer is to plant through weed suppressant matting but you need to cover this with something. I suppose you could just leave the matting on the surface, but pretty ugly. We’ve used bark chippings as a mulch on the back border but they don’t fit with herbs somehow so my first thought was to use gravel.

Gravel fits with Mediterranean herbs, visions of dusty days with the heat bouncing back up from rocky parched earth. But this is Wales, we’ve rocky poor earth for sure, it’s the heat and parched soil we don’t have.

The answer is something we have in abundance, slate waste chippings. These are a fairly dark, purple colour and absorb heat in the day, releasing it at night. Not a huge amount but helpful, nonetheless. In fact, there’s a vineyard local to us who mulch with slate chippings to take advantage of that heat storage. They look good too.

We’ve a small collection of mints; spearmint, black peppermint, pineapple mint and apple mint. I’ve planted thyme, oregano, sage and lemon balm to the front with spearmint and black peppermint behind in bottomless containers to constrain them.

I’ve marjoram in a pot so it can go into the greenhouse for a harsh winter and the pineapple mint will stay in a pot as it’s not as hardy as ordinary mint in my experience. 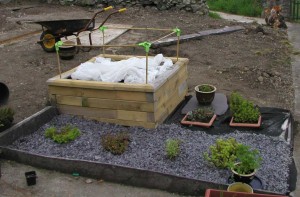 Herb Bed with slate chippings around plants, frame in the raised bed

The rosemary will go into the ground behind the raised bed along with lovage. Our bay leaf is in a large pot by the house and doing very well so I’m leaving that where it is. If it ain’t broke.. don’t fix it!

We also like having salad crops handy for the house and wanted some sort of architectural feature so I’ve built a decorative raised bed based on a kit sent to me by Woodblocx. They’ve done well with it, it goes together like Lego except bigger blocks of course. You might have seen them on Dragon’s Den where Peter Jones invested £75,000 in the company.

They’re not cheap, but when you look at what you can do with them and the time saving for constructing something stylish, not a bad buy at all. However, a large raised bed with nice soft compost at the top is also known as the perfect public toilet by our cats.

OK, I know how some gardeners feel about cats but we love them and they do a very good job keeping the pests at bay. Not just the mice, which we have a lot of, but also rabbits. Bunnies are sweet and I must admit to getting quite upset when the cats have brought one in still alive but injured and I’ve had to finish them off. But we’d be overrun if it wasn’t for the cats.

So to keep the cats out of the raised bed I’ve built a frame using bamboo canes cut to size and Figo connectors to hold them together. Covering that frame with horticultural fleece (I could have netted) will keep the cats off and create a nice micro-climate for growing.