When we moved here we looked at what was described as ‘the orchard’ and thought it would be ideal for some fruit trees and running some hens under. It didn’t seem very big so I thought it too small for a serious veg plot. 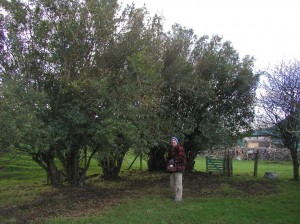 The reason it didn’t seem big was that it was so overgrown. On the west and north there are stone walls with wire fencing to the other sides. The land slopes up to the east providing some shelter although the slope might make a bit of a frost pocket of the plot.

There had been a privet hedge to the south-east corner and some hawthorn to the south west but after 20(?) years they were very overgrown. The privet was well over 20 feet high and the hawthorn not far behind.

Near the north-east corner was a large ash tree which overhung the whole width of the garden so it appeared to be a small tunnel under the foliage. A friend with a chainsaw came over and took down the lot. The ash providing useful fuel for us, it really burns well even when fairly green being a low moisture content. 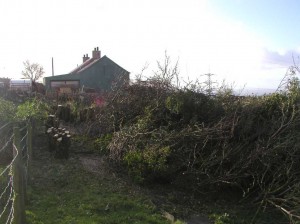 Vegetable plot covered in brushwood from the privet

The whole garden was full of the brushwood and basically got left alone over winter. Come the spring, useful branches for the woodburner were taken out and the rest converted to potash on the bonfire.

Once cleared, it was obviously bigger than we’d thought and measuring it up I found it was 20.4M x 9.2M (187sq. M) which is about 7.5 poles or three quarters of a standard full allotment plot.

The next problem was that there was a lot of long grass, but not too many weeds. I was lucky enough to have an answer to that problem that most people won’t have. Sheep. With the brushwood gone the sheep were in and pretty soon the grass was munched down low.

The old gate to the field had fallen apart but a couple of hours work and some pallet wood had a replacement blocking access in short order. There’s a number of options for clearing a vegetable plot but I chose the easy one and sprayed off with Glyphosate. Left it alone to die off for a couple of weeks and then started to dig over. 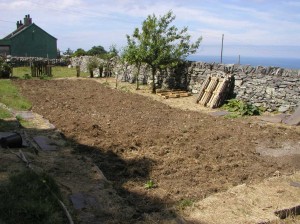 The vegetable plot after rotavating with apple trees to rear

Well this is where things went a bit pear shaped. My neighbour told me he remembered digging it over in the past but it seems someone has dumped a lorry load of stones on the plot since then.

Ideally I would double dig it but after an afternoon of hard work had only managed a few square yards, the spade juddering to a halt as it hit stones only a few inches down. In the end I ran the Merry Tiller over it. The way the tiller blades go around just pulls up the stones rather than being stopped.

The main area being done, the plan is to attack the borders and sort the path out next but before that I want to go across the rotavated plot and remove as many of the stones as reasonable.

I tested a soil sample and it’s pretty acid (pH 5.5) so I’ll lime it after getting the stones out, rotavate again and then sow a green manure. Hopefully it’s going to be in good condition for the spring.

We’ve got some apple trees in there as well but they’re grown from pips and we’ve not had any fruit yet so probably best to grub them up and replace in a different position. I’ve also found a couple of rhubarbs which will need splitting come the winter.

Looking at the eastern side of the plot, where the land slopes up, I realised that it’s probably going to mean cold air will roll down forming a frost pocket so to reduce this I’m going to use windbreak netting fixed to the fence.

5 comments on “Setting up New Plot in Walled Garden”