Last week we were somewhat preoccupied by a royal visit. My mum came to stay for the week. She lives quite a distance away from us so we don’t get to see her as much as we’d like to so made the most of it.

We’ve also been busy painting the house. We actually started in 2011 but ran out of good weather and 2012 was so grotty we never got around to finishing it but we’re nearly done now. Just need one more fine day.

On the Plot – Leeks

Not much has been happening on the plot with all this excitement but I’m happy to say my leeks are doing rather well. It won’t be long before I clear my first early potato beds and they can go in. 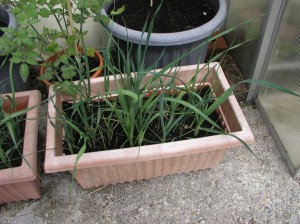 Leeks started in deep trough nearly ready to plant out

Although I was really enjoying the heatwave and sort of hoping for a re-run of the summer of 1976 which was truly wonderful, I was quite pleased that the rains came and saved on watering the potatoes that were starting to be desperate.

I read that you can grow leeks to transplanting size in a seed tray and decided to give it a go. Happily most were moved into troughs as usual because the ones in the seed tray are hardly approaching an emaciated spring onion! I was pretty sure they’d fail in seed trays but now I know for sure.

We’ve got some currant bushes and the like waiting to get planted out. They should have gone out last year really but we just never got round to it. To be honest they’ve thrived on neglect. We’ve actually had a nice little crop of blackcurrants and redcurrants along with a few gooseberries.

Not enough of a crop to do much with so Val turned them into a few jars of mixed currant jam, From what little I could scrape on my finger before being banished from the kitchen, I can tell you it’s lovely.

In my last post I explained about the problems digging the stony soil over. Well I’ve got a Sneerboer pointed spade and am as happy as a dog with two tails about it. It’s a lovely tool and it does the job superbly. I’ve written an in-depth review on it here: Sneerboer Fork & Spade

More Articles on the Site

I’ve been busy on the wet days popping new articles on the site. About half of the brief growing guides to vegetables are now online and can be found here: Vegetable Growing Guides.

I’ve also been adding some more in-depth articles on growing vegetables. There’s a lot more to go but I’ve started with the brassica family and their problems like clubroot and how to grow on clubroot infected soil. You can keep an eye out for new articles here: Vegetable Growing Articles