The last couple of days the weather has changed, I’ve gone from T shirts to thermal vest in nothing flat! Monday was a good outside day however, and I took full advantage.

I weeded the beds and then shovelled out the soil into one of the deep raised beds. The soil below the loose has improved from cultivation but was quite compacted though so I decided to use my Mantis tiller to break it up.

All was going well until it picked up a large stone which jammed the tines. Then it started making smoke like a battleship in an old war film and spitting oil from the side. It seems that some sort of plug has popped out and blowed if I can find it.

Anyway, yet another visit to the machine shop where they’re considering giving me a loyalty card as I’m there so often! They’d got a cylindrical soil sifter powered with a small electric motor. Just what I need I thought until he told me they were about £400. 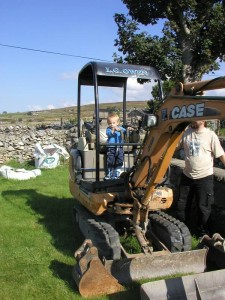 I mentioned this to our neighbour who has built his own soil sifter from scrap wood and powered it with an old reciprocal saw for a few pennies. There’s a quite few home-made soil sifters on Youtube and some look very practical. A winter project I think.

On returning I finished putting the bark peelings between the beds as a path. My cunning plan is to improve the soil between the beds as the path materials rot down. In a few years I should be able to move the raised beds and use all the improved soil as a plot.

The grandson was over with his dad and took about 2 seconds flat to spot the digger that the builder has left. He toddled over, climbed up and commenced pulling and pushing at all the levers going ‘vroom, vroom’. It seems big boys toys are also little boys toys too!

Well the weather change has made outside work unattractive so I decided to do some writing. The first thing was an article on biochar. The amount of hype on the net about it is enormous. Some would have you believe it’s the solution to all problems. Having done some proper research, I’m afraid it doesn’t live up to the hype. You can read it all here: Biochar & Terra Preta

Back in the distant past, when dinosaurs roamed the earth and I was slim, we grew tomatoes on straw bales. It’s not so easy now to even find suitable bales as most farmers use huge combines and tractors like tanks. The humble bale is most often a huge tubular thing for mechanical handling.

The other big problem is that farmers are often using selective hormonal weed killers that allow the wheat to grow but kill everything else. These herbicides are persistent and can kill off tomatoes as easily as a weed.

Regardless, I thought it worthwhile detailing how we did it as I’m often asked if I know about it. I’ve given full instructions here: Growing Tomatoes in Straw Bales