At Last Some Rain!

Finally a drop of much needed rain last night and the promise of more later today. The fields were beginning to look a little pale and brown and I’ve even had to water the herb bed a few times, both signs that things were getting very dry.

When you water with a hosepipe you’re probably delivering 15 to 18 litres per minute. So if you spray a square meter a minute, that’s the equivalent of 15 to 18mm rainfall. A good downpour. Watering a full plot of 250 square metres to that level will take over 4 hours and doing it by hand, carrying cans of water much, much longer.

The answer, of course, is to water just where it is needed rather than the whole plot. The worst solution is to sprinkle everywhere for a few minutes daily. All this does is make the roots grow shallow and evaporate half the water away into the air. Check out Watering the Plot Efficiently for Better Plants

Having been warned by the weather forecast that the rain was coming, we (OK Val) got the onions off the frame, strung them and they’re hanging in the shed now. It really is an amazing end to the summer, this hot weather in September. 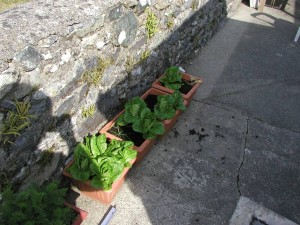 Lettuce in Containers with cracked concrete

I’ve been growing some little gem lettuces in containers thinking to move them into the greenhouse when the weather turned but it hasn’t. Out of 16 the score so far is: 5 eaten by us, 2 murdered by vicious snails. I don’t know where all the snails come from. I lay down pellets, kill a load off and another lot arrives the next day. 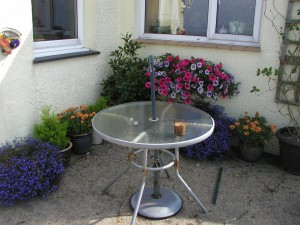 Anyway, we’ve bitten the bullet and a firm are arriving to lay a new drive. The boss delivered his digger the other day and I asked him for a quote on re-doing the patio at the same time. Well he was half the price that I feared he would be so we’ve decided to go for it. I could do the patio myself but it would take me months and knowing my abilities look a right dogs breakfast when I finished. I built a dwarf wall once which caused a builder to collapse laughing!

When the weather is good we like sitting outside and Val likes to plant up a load of pots to brighten things up. Usually they’re reaching the end and looking a bit sad by this time of year but they’re still in full bloom and looking fresh. 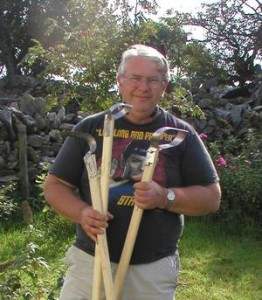 We’ve been testing out some unusual hoes from Russia of all places. Sophisticated design applied to the humble hoe. I was very impressed and have written it up in the product reviews section – Unusual Hoes.

Nearly forgot! I planted an apple tree the other day. It wasn’t on the plan for now but I was writing an article for Home Farmer and needed photos.

I’ll write up some articles for the site soon as well – got a lot planned for the site come autumn but until then I’m outside as much as possible.

Leave a Comment Here on At Last Some Rain! Cancel reply