The last week has remained unseasonably good. It’s been overcast a lot, but warm and dry and seems set to continue for a few days more. As they say, we don’t have a climate in Britain but we do have weather!

Scotland – Yes or No

Britain brings me to the big news of the moment, Scotland. Normally I avoid mentioning politics and religion as they are so divisive but this is more than politics. It’s possibly the end of our country as we know it. 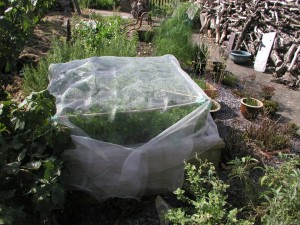 Carrots and Spring Onions under Cover

I can understand Scots feeling that they’re ruled from a London government who doesn’t have their best interests at heart but they have devolution and we all benefit from the economic powerhouse of London – whether in Wales, the north of England, Northern Ireland or Scotland.

In an uncertain world, which I think will get more uncertain over the next 20 years, being in the union brings a level of security.

I really fear Scotland leaving the union will be a disaster for us all in the UK over the long term. But it’s not my choice, it’s the choice of Scotland. If they do choose Yes, I hope I’m wrong and it all works out.

I’ll now get back to the garden!

I’ve been getting the last of the potato harvest in except for a bed of Sarpo where the haulm is still up. I’ve had a few Sarpo Miras already which have grown from travellers that have been very good so hopefully the bed will have a decent crop. 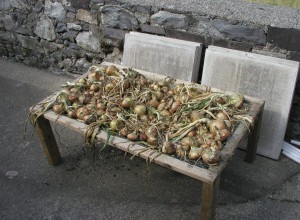 Many of the potatoes have been badly hit by blight. I’m beginning to think the only way to grow anything but first earlies is to spray prophylactically with Bordeaux mixture or similar, which I’d prefer not to.

The blight problem is getting worse and not just because of warm wet summers giving us more Smith periods but because there are different strains which mix and breed to form yet more strains. 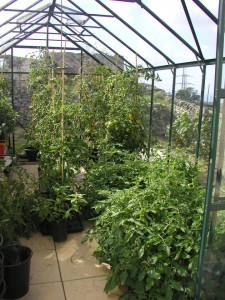 That’s why some potato varieties like the Sarpo strains are very blight resistant one year but not another. It’s like the flu, last years vaccination just doesn’t work for this years germ.

A very good crop of onions from a limited space and late planting. As I’ve said before, I’m sure the salt trick did the business. I’m sure the salt is responsible for their flavour as well, super-strong. We’re always learning in this gardening game.

The greenhouse is chock-a-block but the peppers have suffered from the whitefly which are now under control. 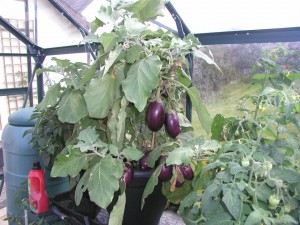 In hindsight, I’ve over-crowded a bit but it’s hard to chuck away a perfectly good, productive plant for lack of space.

The raised beds in the side field suffer from three problems, the wind, the cats and the grass. The cats, who have acres to play in, insist that raised beds make the best toilets and they invite their chums from miles around to use them. Netting helps with the wind and keeps the cats out which leaves the grass. 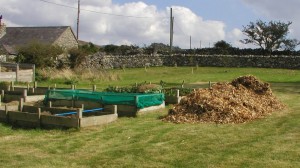 This grass is special, drop something on the ground and a week later the grass has grown over it. I can mow between the beds but that doesn’t stop it growing up the edges so mowing and strimming or edge cutting is required – which takes up time.

So, I’ve cut it as low as I can and am covering it with a 4” mulch of grass clippings followed by bark chippings on top.

Eventually it will rot down but I don’t want permanent paths. At some point I may move the raised beds and declare the whole patch good deep growing ground.. if I live long enough!

You can buy bark chippings in bags for a few pounds per bag but I got a large trailer load from Glasfryn sawmill for £17, which I reckon works out to the equivalent of 45p a bag!