I didn’t get down to the plot over the weekend. The weather was hardly brilliant and so I caught up with some jobs at home. Did get down on Monday afternoon to water in the greenhouses and Larry mentioned the Joe Swift trial bed. In case you’ve not been following, that’s the raised bed that had compost dumped over the weeds and got sprayed when they came through the compost.

This left a bed that, quite frankly, looked a mess. It was covered in dead couch grass, horsetail and bindweed. Since the allotment competition judging was today, a bed of dead couch was not what we wanted to impress the judges,

I can take a subtle hint and the Great Leader’s wishes are my command so out came the fork and the bed was cleared. Now just scraping off the top would have left the weed roots and some were bound to have survived the chemical attack, so I got as many of the roots as I could.

I finished up, put the tools away and was just having a chat with Therese on plot 1 when the Dear Leader (She Who Must Be Obeyed) arrived to tell me it was half past nine and the dinner was drying up. Definitely in the dog house.

The judges arrived on the site just after 2.30pm today and at least my plot wasn’t letting the side down too badly. In fact the site as a whole looks better than I’ve ever seen it.

I’ve not entered the competition this year. Apart from knowing both the judges, not that that would make any difference to their judging, I’ve two plots and you can only enter one. Since one has all the potatoes and the other nearly all the beans, so not much of a range of crops on either. Them’s my excuses and I’m sticking with ’em.

The judges were NVS qualified judges and fellows, Dave Hampsey and John Carver. It’s taking them two days to go around all the sites in the area and it’s a tough job. Whatever they say or whoever wins, someone will second guess them and say they’re wrong.

Glastonbury Pete suggested last year that instead of winners, which predicates losers, that we should have awards like gold, silver and bronze medals with a commended. Thinking about it, that would be a good idea. It encourages all and certainly there are 4 plots on our site that I’d give a gold to. It also means people could try for better next year but nobody loses.

Anyway, off they went along with Glyn, our unsung hero at the council and the rest of the entourage and the site quietened down. Strangely the plotholders who had entered the competition went off and at one point I was on my own on the site before the late shift started to arrive.

Planted out some dwarf French beans I’d started in pots and put the set grown onions onto the drying rack from the raised bed on plot 29. Ran the Mantis over the bed and gave it some fish, blood & bone before planting out some swedes I’ve started in modules.

Popped some netting over the swedes to stop the birds from feasting on the young seedlings and then the boss showed up again. I wondered what I was in trouble for but I was in luck. My instructions were to dig up some new potatoes for her Dad, who she is going to see tomorrow. It may not be the most posh plot on the site but it does keep us fed.

Picture Below: Dave Hampsey (in green) and John Carver conferring on the score sheet. 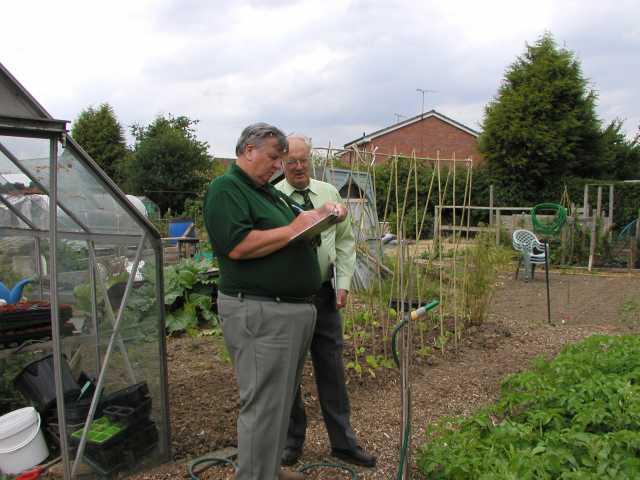