I had an interesting email the other day from Mike:

“Hi John
Can you shed any light on this Strawberry variety? It managed to get across from my neighbours fence as a runner last year and I have nurtured it to see what its like . Well in comparison it’s an early variety which tends to be a gnarled shape rather than the normal shape . It also tends to be more full than the modern varieties and has a sweet taste. I can not see it listed on any website and tend to think that it may be an older variety which was grown here in the UK about 40 years ago
Regards
Mike”

Well this is a poser. Strawberries aren’t very long lived plants, which is why you replace them every 3 years or so when they lose steam and cease to be productive. How long a strawberry can live for, I don’t actually know but I’d think 5 years would be about the limit.

When they reproduce from seed though, they can cross pollinate with other varieties which ensures genetic diversity. That’s how they breed new varieties, crossing older ones to bring out the traits they want.

So my best guess is that this strawberry started as some sort of cultivated variety that’s been ‘polluted’ with genes from wild or other types of cultivated strawberry by cross pollinating and doesn’t really resemble the original variety much.

I can’t think of any cultivation faults or nutrition problems that would cause the plant to consistently produce the strange shaped fruits. It really would appear genetic but writing this I wonder if they could have suffered from some hormone weedkiller spray drift. Then again, Mike specifically says “ I have nurtured it to see what its like” so that would rule out weedkiller.

I can’t really see it being a commercially viable variety with the strange shape, even 40 years ago. Seedsmen try to supply what they think we want and most people want a strawberry shaped, well like a strawberry! So I’m not surprised it’s not listed.

However, I’m only guessing – so if anyone knows more about it then please pop a comment in below. 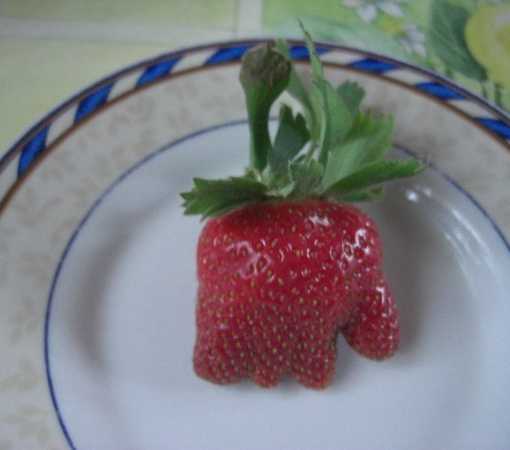