When to Cloche? New Information on Cloches

Cloches have been used by gardeners for many years to protect their crops from cold weather. Of  course, they’re not complete protection. On average they only keep the plants a few degrees warmer than outside, but that’s actually quite significant.

Cloching can be the equivalent of planting out two weeks or more before nature alone would allow.

Now conventional wisdom, which I’ve always followed and passed on, is that you need to cloche a week or two before you plant out to warm the soil. However, it seems this might need to be revised. They say:

PoshCloche, who manufacture garden cloches for the UK vegetable growers market, have today released data on a series of soil temperature tests undertaken in December 2009. The tests, carried out at a depth of 5cm, revealed that the soil warmed by 1.5 ºC in the first 5 hours of the trial, challenging previously held views that cloches needed to be sited for several weeks to make any impact on soil temperature.

They’ve got various graphs on their site here that show both the outdoor and under cloche temperature over time, including a trial undertaken in December this year. When I’ve planted sweetcorn out, I’ve set out the cloches a week before and then had to take them all up again, plant out and then re-set all the cloches. Having seen this, I’ll be doing a lot less work – setting up the cloches as I plant.

“As soil temperature is such a critical factor affecting seed germination, I was extremely pleased with the extent to which our cloches can advance the soil warming process and in so doing, support vegetable gardeners with earlier planning and sowing of their gardens and allotments”

I have to agree and commend them for an interesting piece of research that should save gardeners a lot of time. Their website is here: PoshCloche 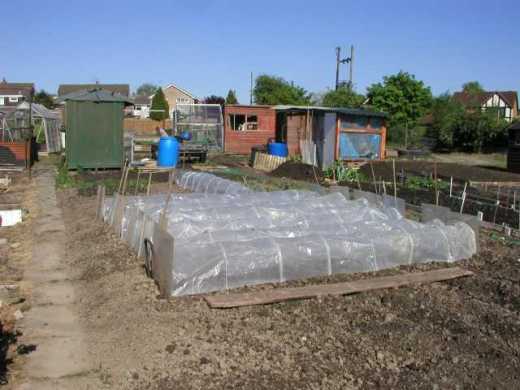 Sweetcorn Under Cloche in Early May

8 comments on “When to Cloche? New Information on Cloches”

Leave a Comment Here on When to Cloche? New Information on Cloches Cancel reply