Taking advantage of the decent weather to catch up outside. I’m afraid things had fallen behind schedule but we’re doing our best to catch up whilst the we can. 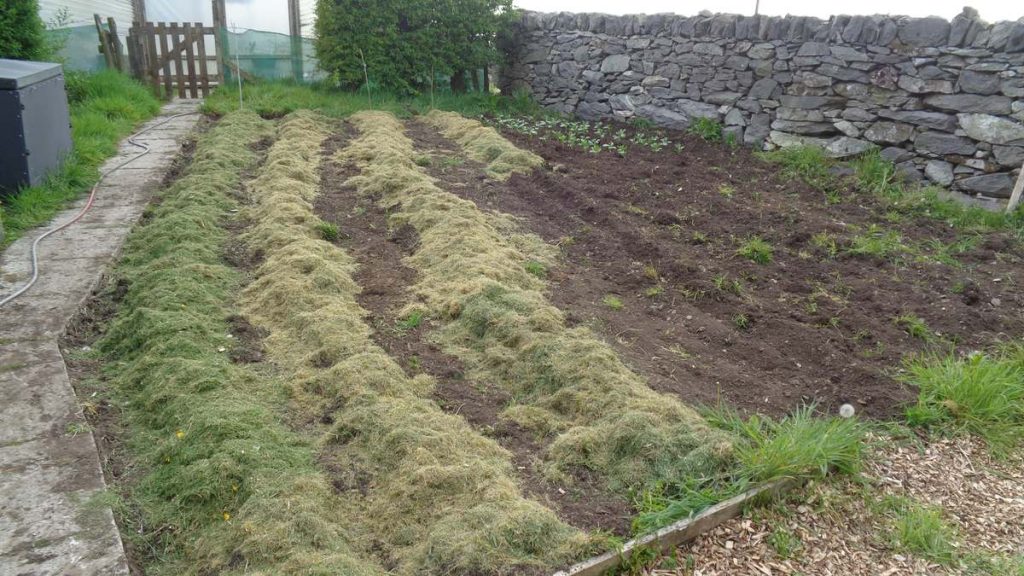 Last of the maincrop potatoes planted, rows have an addition cover of grass clippings. Broad beans to the rear.

The last of the potatoes have gone in – only a month later than planned! They’re all maincrop and should be coming out in early October. A few left over Scapa followed by Setanta and then Sarpo Axona and Sarpo Mira.

When we first cleared the walled vegetable garden, the soil was pretty poor. I can’t get over how much it’s improved now. Rich, dark and friable with lots of earthworms. No magic to it, just keep adding good stuff like masses of manure plus compost and grass clippings.

The trenches were drawn 80cm apart with the Mantis tiller followed by the Wolf plough tool. Dropped the seed tubers in at 40cm apart until the Mira which were spaced at 50cm. Mira is so vigorous that it will easily use the extra space. Once the rows were earthed up, covered them with grass clippings.

I sowed some broad beans directly in a raised bed about four weeks ago and sowed more in pots a fortnight later, which have been planted out behind the potatoes. There’s not any real difference between them which is interesting. I’ve a third sowing in root trainers which should be going into the ground in a couple of weeks. 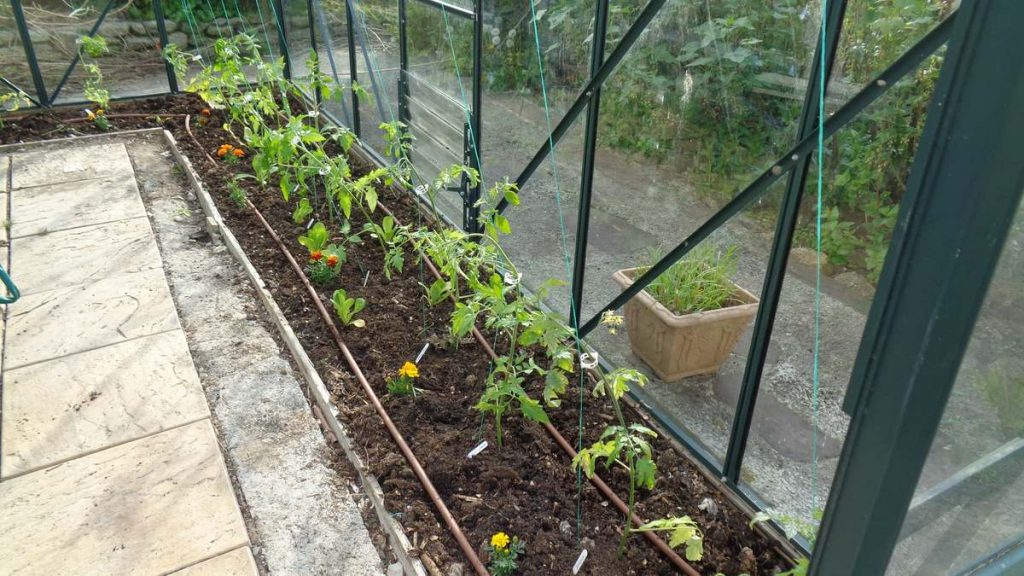 Tomatoes deep planted in the greenhouse border behind marigolds along with a few lettuce.

I’ve started planting out in the greenhouse. The border has had two loads of compost from the hotbin which should provide all the various micro nutrients as well as basic NPK although I’ll use additional fertiliser when the fruits form.

The tomato plants are a bit bigger than I’d like but that’s OK as I deep plant them. In theory it should produce more roots and therefore feed better growth with more fruits. I don’t think it makes a huge difference to yield in a home greenhouse but it does help.

Val picked up some marigolds which I’ve planted at the front of the border. They are supposed to deter whitefly but whether they work or not, they’re pretty to look at. I’ve also planted out some lettuce. The space in a greenhouse is expensive so it’s important to make the most of it.

Leave a Comment Here on Potatoes to Tomatoes Cancel reply