You can’t win them all but we’ve had some great results this year on the plots. I’ve never grown so many squash and the parsnips are set to be top notch. 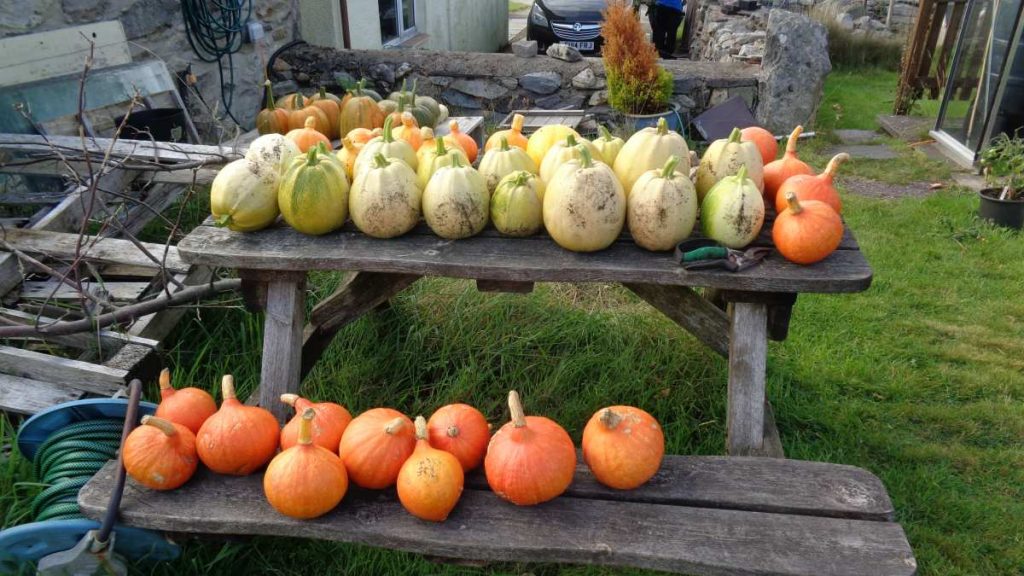 We’ve had quite a success with the Uchiki Kuri squash and, to add to our blessings, the pumpkins and spaghetti squash have also done well. We’ve far more than we can use but that’s OK, we’ll share the bounty with friends. I’ve earmarked five pumpkins for kiddies to carve for Halloween. That’s half of them gone already.

They’ve all gone onto the table outside to finish ripening and cure prior to storing on slatted shelves in the store. I’ve still got some butternuts growing. They’re usually the last to get although they’re not far off. I picked one that was ready but it had split so it won’t store for long.

We’ve got some great squash recipes on the site along with some fantastic pumpkin recipes. I’m surprised we don’t make more of them in Britain as they do in the USA. They’re not difficult to grow and hardly take any work once they get going.

Even in my old recipe books from the war, squash and pumpkins hardly get a mention yet they are as easy to grow and store as well if not better than marrows, which often do get mentioned. I think they taste better than marrows as well! 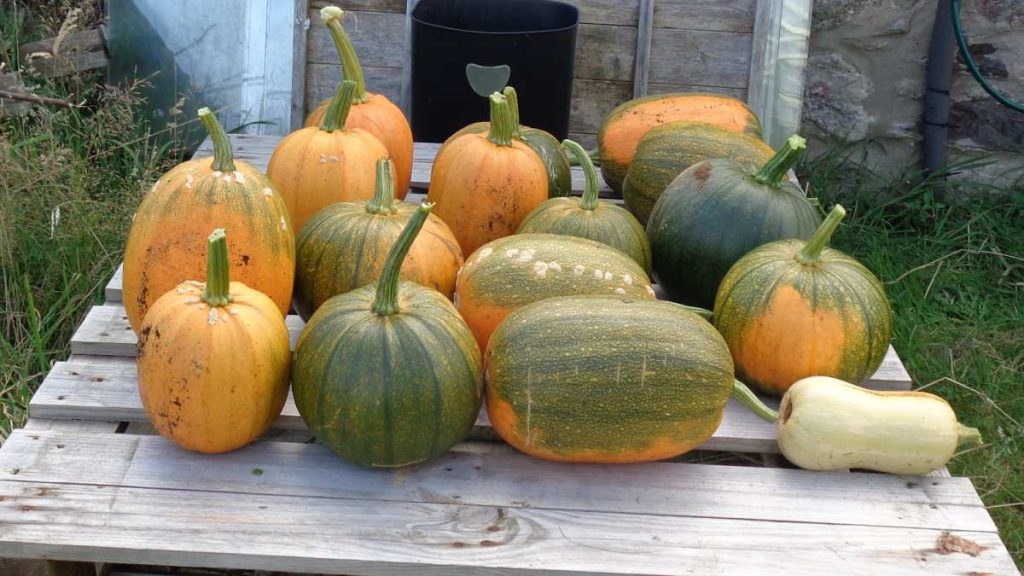 Jack O Lantern Pumpkins curing outside on a pallet. The green will gradually turn orange. 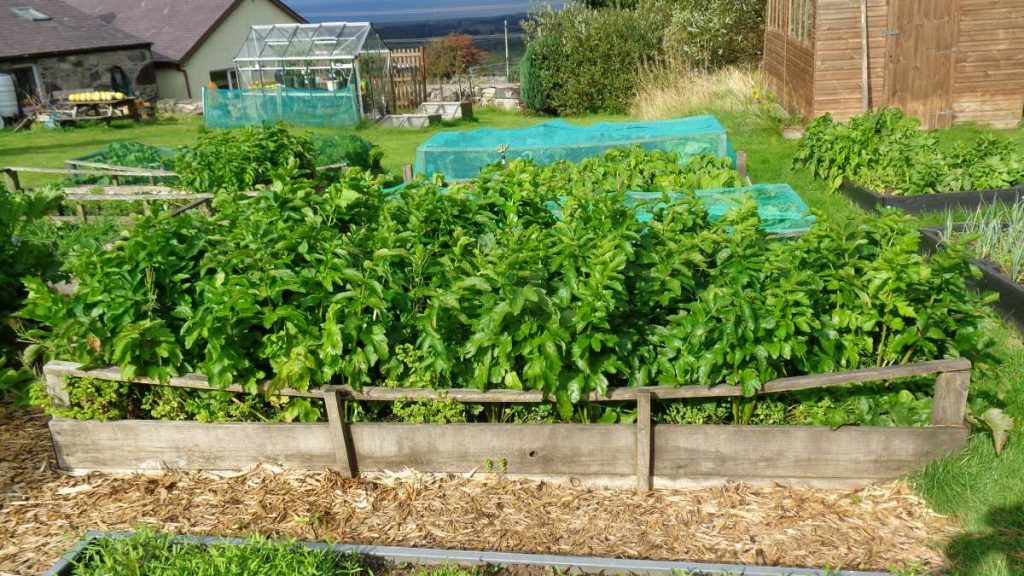 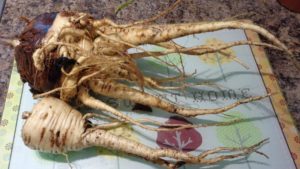 My parsnips are looking well above the ground but… In the past I’ve had parsnips look great until harvest when they turn out to be multi-tentacled, distorted alien monsters. Still edible but hardly attractive and very hard to prepare something usable.

Usually with me the distortions have been due to my experiments with germination / transplanting rather than direct sowing. Parsnips can be tricky but my paper pot method works well. Not only does it get a reliable and fast germination, it avoids the distorted root problem.

I make up the paper pots, fill with multi-purpose compost and sow a couple of seeds per pot about 2 cm deep. Put the filled pots into a seed tray with holes in the base as the paper pots are a bit fragile, especially when wet. Then water and pop in the propagator at 17ºC /18ºC for seven days before planting out. Once the seedlings show, thin to the strongest and the job’s a good ‘un.

To reduce weed problems. At the time the seeds are sown, rake over the bed to help germinate any weed seeds. Then run a flame weeder over the bed just before planting the paper pots. Any further weed germination won’t really matter as the parsnips will have had a head start and can shade most of them out. See sacrificial bed

The tap root grows quickly on a parsnip and may well be pushing the base of the pot as the seedling shows above ground. Planting seven days after sowing this way ensures no check on the root leading to distortions and forking. 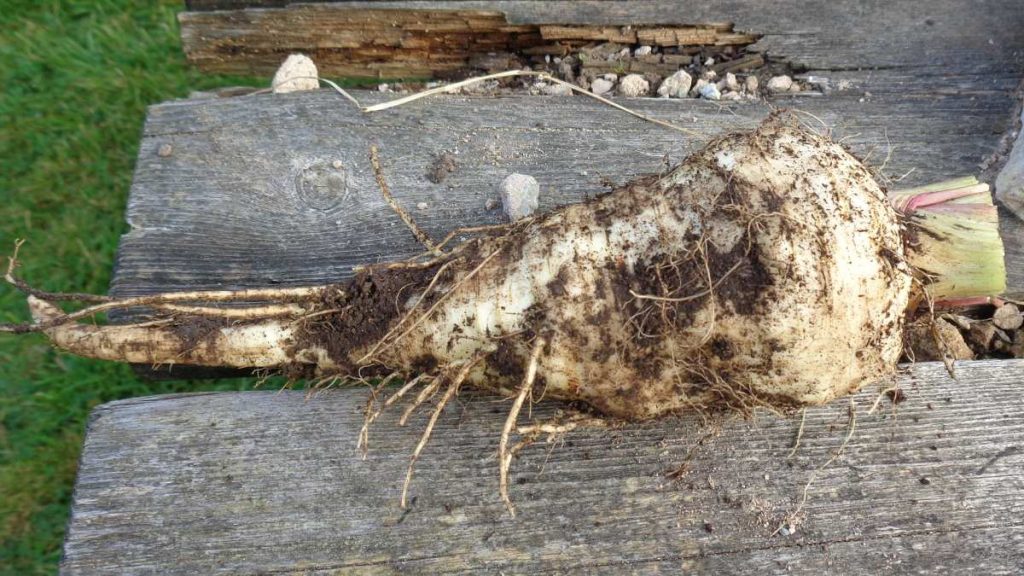 Parsnip pulled at random – rather pleasing.

That’s the theory but you’re never certain until harvest that all has gone to plan. Although the crop won’t really be ready for harvest for at least a month, I could not resist pulling one early to see how it looked.

Actually it is an acceptable size as it stands now but parsnips always taste that bit sweeter after a cold spell as that causes some of the starches to turn to sugars.