One of the big benefits claimed for no-dig growing is that the system reduces weed pressure as buried seeds aren’t brought to the surface by cultivation. There certainly is some truth in that but I don’t think it’s quite as effective as we’d wish. 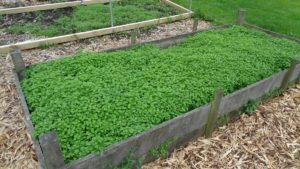 No-dig depends on the addition of compost to the beds each year – not a bad idea however you grow – but this year it backfired on me. I topped up some of my raised beds which are managed on a no-dig system, with a layer of compost prior to sowing a last crop of carrots. What I didn’t realise was the compost seems to have been full of chickweed seeds which promptly germinated and swamped the carrots.

In hindsight – that lovely exact science – I could have easily sorted the problem if I’d known the compost was full of chickweed seed using the sacrificial bed method. It’s one of those old gardening methods known to the Victorians that has been rediscovered by market gardeners, the sacrificial bed.

The idea is simple and effective. The bed is prepared as normal and then left for a week or two so that all those weed seeds germinate. The bed is then hoed off, which doesn’t take long as there are no crops to avoid. Then the bed is sowed with the crop which won’t have many weeds left to cope with.

Some market gardeners in North America have taken this method even further and call it a stale bed. The bed is prepared as usual and then sown. The crop I read about it being used for was carrots which the author knew would take six days to germinate. I think he used the same varieties year on year and the weather was the same each year in Canada to predict germination so accurately! 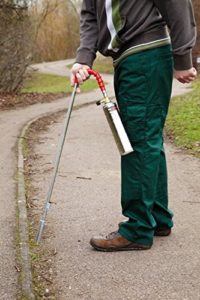 The weeds, as they do, would germinate first so after 5 days he would flame weed the bed leaving it clean for the carrots to follow. Incidentally, flame weeding is very effective on seedlings. The idea is not to burn them off and scorch the ground, just pass the flame over them for a second so the leaves shrivel. The tender seedlings will die off but the soil below is just warmed slightly.

I’ve still some of that chickweed filled compost to use, but when I do use it again I’ll use this method to clean the bed prior to sowing. Since even the action of hoeing disturbs the top soil and can cause a second germination flush of weeds, I’ll flame weed.

Flame weeders are pretty cheap to buy and they don’t use much gas. They’re a tool that’s been around for many years although years back they were paraffin powered rather than gas. The paraffin weeders were somewhat tricky to get and keep going though, a bit like primus stoves if anybody remembers them.