We’re planting out the pumpkins and squashes that I’ve grown in pots in the sheltered environment of the greenhouse. They take up a lot of space as they need a fair bit of foliage to power the plants’ production but I’m lucky in that’s not a problem for me. 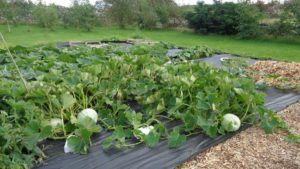 What is a problem is that whilst they grow they don’t cover much of the large area that they’ll take up when mature. This allows the weeds to get a hold and keeping them back takes valuable time. They’re also a bit fragile and a slip with the hoe near the stem can be fatal.

The method I use is to grow through weed matting. This cures the weed problem and provides a surface for the fruits to sit on. They’re less likely to rot through ground contact and it’s easier to control the slugs and snails.

Two years ago I grew them this way and it worked very well despite our windy, wet conditions.

I dug out a cube roughly a foot to a side and filled that with compost whilst covering the whole area under the matting with green waste and cardboard. The squashes being planted into the compost cubes, of course.

The following year – last year – I tried something a little different. I still grew through weed matting but I spread the compost under the matting rather than digging out cubes. With our rocky soil, digging out the cubes can be very hard work. I’m all for the easy, efficient ways to do do things.

Well the squashes did grow but not as well. It’s hard to quantify as there are other factors in play like the weather and different varieties, seeds etc. I suppose I should have done a proper trial in the same year but I’m doing this for my interest and the crop, not a research paper! My strong feeling is that the change of method was to blame. 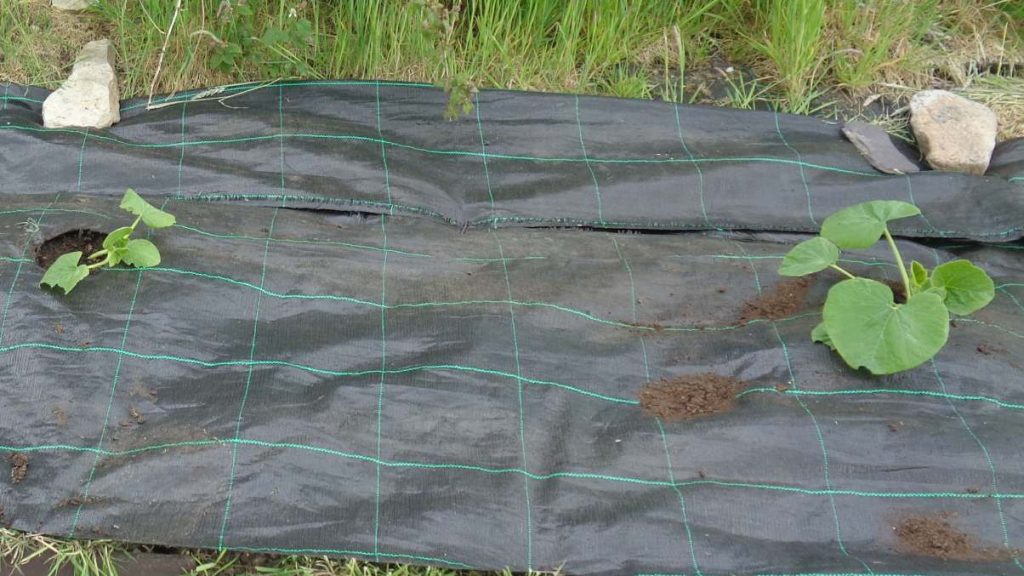 Following harvesting, the matting was left in situ until the following spring. Then it was lifted and the soil rotavated for the potatoes. Still stony but the soil was much improved with increased levels of organic matter. The worm population is increased as well.

One of the benefits of this traditional cube method is that it can be equally applied to virgin pasture or cultivated soils. Either way, the manure/compost provides the bulk of the nutrients needed.

I suppose it would be possible to grow squashes in a large pot filled with the right compost. However, it would need a lot of care with watering as squashes need a lot of water to grow and a pot lacks the reservoir that the ground provides.

Making the holes in the weed membrane is easy. Note this only works with the quality heavy duty matting. It doesn’t work with the very thin mats. Start by making a template shield to prevent damage to the mat. I use some scrap plywood and cut a hole of the right size.

Place the shield onto the matting and then burn the hole. I use my flameweeder but a blowtorch would do the job. My son-in-law made this video clip of the process on his phone.

Clip of a weed burner being used to make a planting hole in weed membrane. The plywood template prevents damage around the hole.