The dripline watering system is running well now I’ve got it worked out, the polytunnel is being very productive and mixing my own fertiliser. 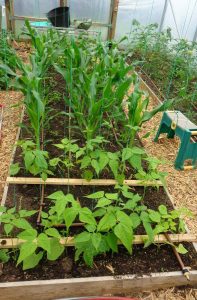 French beans at either end of the centre bed with sweetcorn in the centre. Tomatoes to the right in the background.

In the polytunnel I’ve got a dripline watering system in the centre and right hand beds and another set up in the border of the large Vitavia greenhouse. It took me a while to get to grips with but now I have it’s fantastic.

Getting it set up wasn’t difficult but initially I did have a problem with connectors coming out of the pipe allowing water to flood out at full tilt rather than gently, slowly drip into the soil. This had a very simple solution, only turn the tap on a bit.

Thinking it through, the holes through which the water drips are actually pressure regulating emitters, not simple holes. Clever stuff! This means that turning the tap on full will not increase the flow but just builds up pressure in the system and blows the connectors out.

Because I’ve now solved the connectors problem, I just pop the hosepipe on in the evening and leave it running overnight. I’ve noticed that because the water slowly drips in to the soil the surface remains quite dry whilst underneath the moisture spreads fairly evenly. This is great for the plants with their deeper roots but not good for weed germination and seedlings on the surface. Anything that reduces weed pressure has to be good.

The sweetcorn in the polytunnel is doing really well. Sheltered, warm and plenty of food and water. Outside the sweetcorn isn’t doing well but I’m hopeful it will take off soon. The climbing French beans are starting their journey up the strings, it won’t be long before I’m hearing Val saying “Not more beans!” 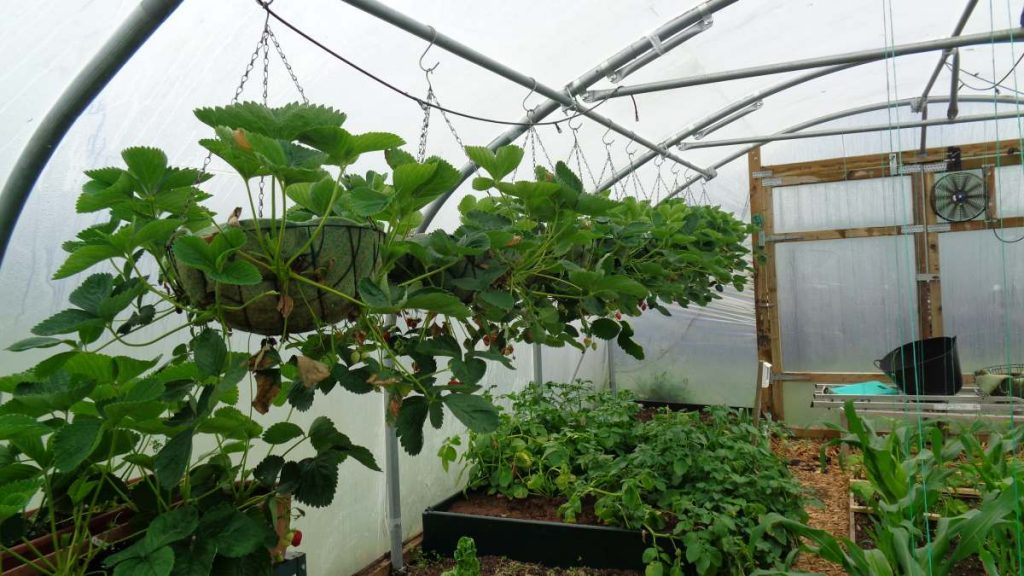 Strawberries in the hanging baskets above the bed. The remaining potatoes in the raised bed below were harvested after this photo.

The strawberries in the hanging baskets are exceptional this year. I water them with a wand which takes less than 10 minutes. I could set up a dripper system for them but I really don’t think it’s worth the effort.

I’ve emptied the rest of the Arran Pilot from their raised bed. I haven’t actually weighed the crop but I estimate we’ve had 20 kilos from the four foot square bed. That has to be a good result.

The reason I’ve harvested the lot is that the outside first earlies are flowering. This tells me they now have tubers forming and can be harvested shortly. Harvesting creates space for a follow on crop. Last year the leeks in the polytunnel were superb so I’ll do them again.

The tomatoes in the polytunnel aren’t doing as well as I’d like. They look a bit stressed which may just be down to hot days and cold nights or it may be a nutritional issue. I can’t do much about the temperatures but I can sort any nutritional problems.

I mixed up a tomato feed from powder of N:P:K 22:7:22 to which I added S-Chelate Cultiv-8 tace elements and SM3 seaweed extract. That will cover any nutrient problems and should get them where I want them to be.  The feed is mixed in the kitchen to a strong solution which goes into a 5 litre container. This is mixed 20:1 with water to make up a feed on site.

It’s also going onto the strawberries whilst they’re fruiting and on the climbing beans outside to get them going.