I’ve had my Mantis Tiller serviced, which was expensive but worth it.  I’ve had a Mantis Tiller for about 16 years now. They’re a great machine, lightweight and versatile. With my Mantis and its attachments I can prepare a bed, weed a bed, dig a trench, earth up potatoes and even scarify a lawn! 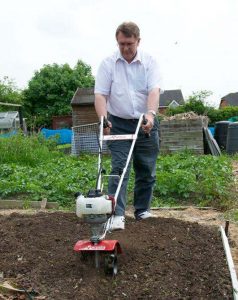 The 4 Stroke Mantis Tiller in use

The first Mantis I had was a 2 stroke machine and very reliable. As with all garden machines, they spend most of their life sitting in the shed and tillers tend to be used for relatively few hours each year.

Each spring I’d take the Mantis out of the shed, fuel it up and after a few pulls on the string, away she’d go. At the end of the year; empty the fuel and pop a little oil into the cylinder to prevent rust. Perhaps change the oil and top up the gearbox grease.

Then, in 2010, Mantis introduced a 4 stroke version. This was in response to new EU wide regulations on emissions and engine noise as much as anything else. Otherwise the same machine. I’d never found it noisy and being a tiny engine I couldn’t see the emissions as being a big deal but the law is the law.

Mantis gave me one of the new machines and I sold my old 2 stroke on Ebay. In hindsight, a big mistake. Initially there were no problems. It was a little heavier but that made it a bit easier to control, so no problem.

As time went one though, getting it running became more problematic. Starting it was so much hassle that I used it less and less. The local excellent repair shop, Peirianwaith Eifionydd Engineering in Tremadog reckoned much if not all the problem was down to the system being more sensitive to fuel deposits.

Despite only using fresh fuel and adding a preservative to it, the Mantis was still problematic. So it’s sat in the shed unused for nearly 2 years. Part of the reason for that was my back stopping me from using it. They’re not heavy but it does put a strain on the back using it.

The chap at Peirianwaith Eifionydd Engineering told me he also had a Mantis 4-stroke and had found the answer. Apparently fuel is changing and the problem getting worse. So he’s once again given it a full service, replaced various fuel system components and cleaned it out. It starts well again!

The trick to keeping it running well is use a different fuel, Husqvarna Power 4T. Husqvarna say of it:

It is expensive compared with petrol from the garage, a bit over 3 times the price. But if it saves expensive servicing – not to mention frustration – then it is well worth it. I’ll see how it goes but I’ve complete faith in the repair shop. They know what they’re about.