Now the weather has turned and we’re getting on with things outside. Not least the grass which loves wet weather, unlike the mower. Harvesting has started! 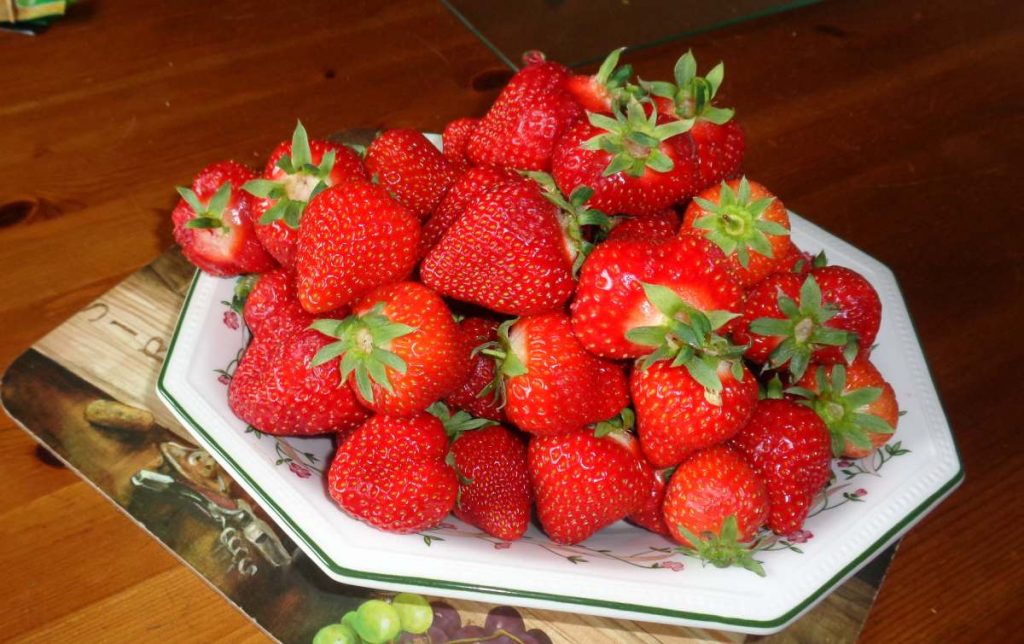 Pass the cream and tuck in!

April was a funny month, sunny and very dry but also very cold. May wasn’t exactly a scorcher although it looks set to end well. It’s was the wettest May since records began in Wales. That’s pretty impressive in a country noted for rain.

The problem with loads of rain isn’t just that you can’t get much done outside when it’s pouring down. The slugs and snails think they’re in heaven – although I hope they’re going somewhere hotter when they leave this mortal realm 🙂 It also washes nutrients out of the ground so now is a good time for a little fertiliser boost.

Having had the Mantis back from the shop we’ve gone over the plots in the walled veg garden. It’s had the Merry Tiller over it about three times, mixing in the mass of sheep manure but it was still not the best tilth. After the Mantis ran over it, chopping up the annual weeds that were starting to carpet it, the tilth is superb.

Once the grass has been cut and if time allows, the plan is to use the de-thatcher attachment on the Mantis and scarify a lot of the moss out prior to fertilising. I’ve plenty of uses for the clippings.

The comfrey was ready, well more than ready, for a cut. That, along with grass clippings, is now under the weed mats where the squashes and pumpkins are going.

My son-in-law has been helping me out. With my sciatica I’m just not able to do what I’d like. The temptation is to overdo things when my back is feeling better only to make the problem return and worsen. I hope he’s learning rather than just following instructions, I try to explain the reason for doing things as well as techniques as we go along. He doesn’t seem too bored!

We’ve got a lot done. The quadgrows are all set up; tomatoes, peppers and a Carmen cucumber. Wicking system pots are ideal for cucumbers as they don’t like a wet stem. Nothing more annoying than a good plant suddenly dying because the stem has rotted a ground level. 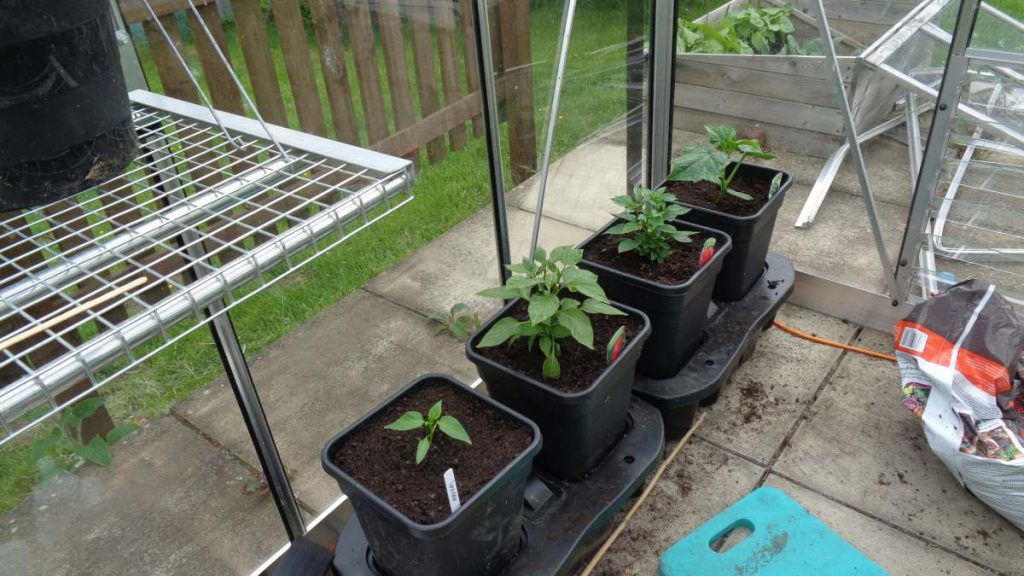 Quadgrow in the Eden greenhouse, 3 sweet peppers and a cucumber (Carmen) at the far end. 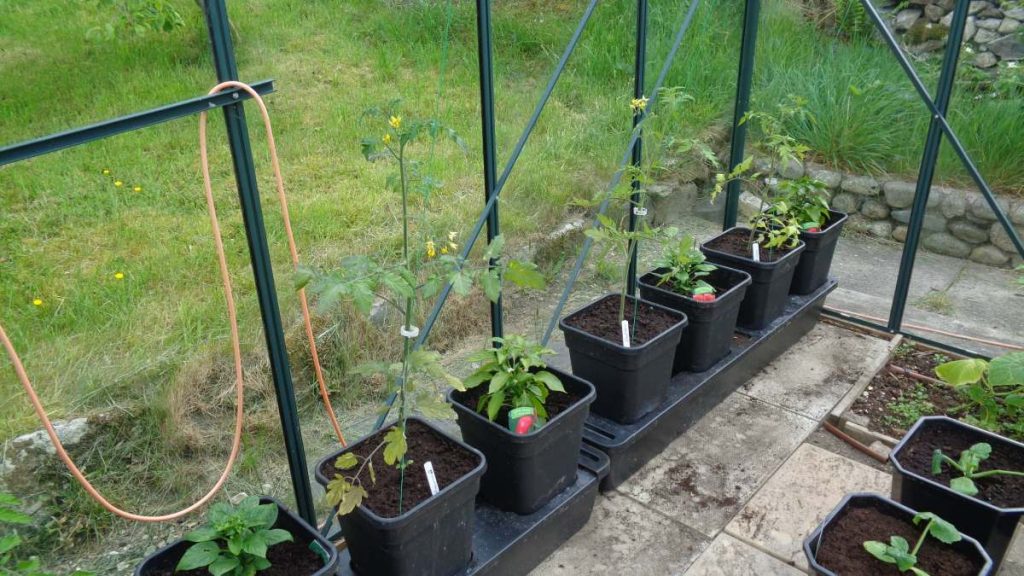 Quadgrows in the Vitavia greenhouse. Alternating tomatoes and peppers.

We had our first new potatoes on Sunday – Arran Pilot from the polytunnel. Lovely! Masses of strawberries  to harvest. The perfect finish to meal, super-fresh strawberries and cream. Don’t think of the calories in the cream.

The first flush of strawberries was just over 2 kilograms from the hanging baskets in the polytunnel and the growbag on a wicking system in the Eden greenhouse. There are more ripening every day. Some will be jammed to take summer’s taste into the winter and others go into various puddings. 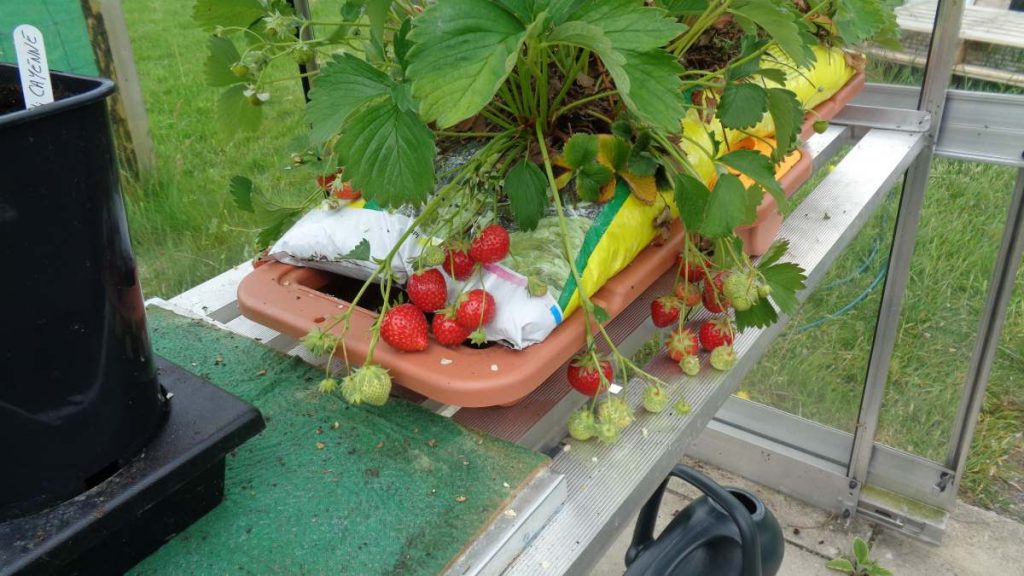 Strawberries in a Grow Bag on a Hozelock wicking watering base.