We’re well into March and – in theory – the growing season is starting. That’s assuming the rain does stop for long enough and the land dries out enough! 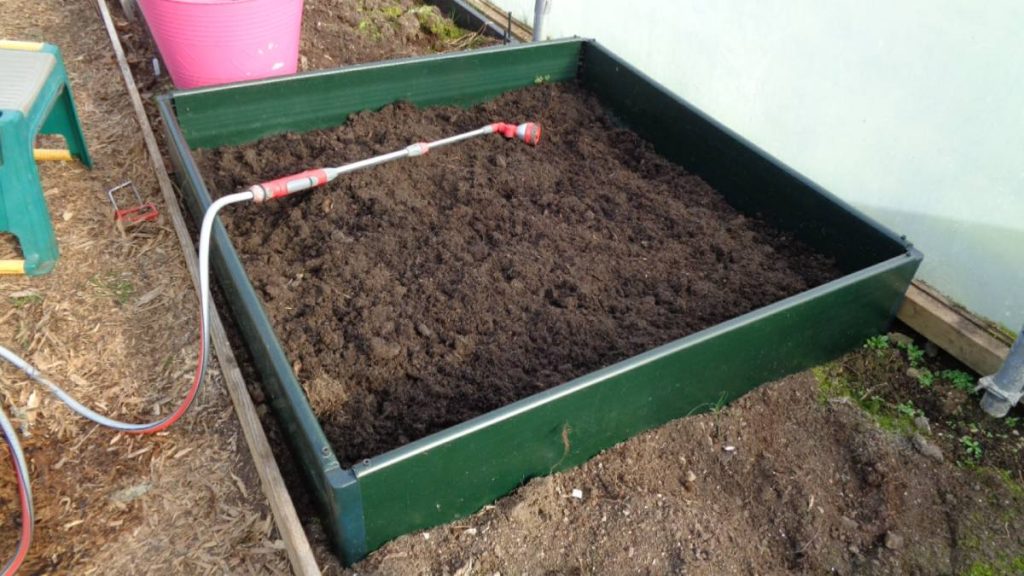 Soaking the Raised Bed Prior to Planting Potatoes

My first job for March was to plant first early potatoes in the polytunnel. I’d half filled a 250mm deep, 1.2M square raised bed I had from Gardenskill with compost to which I’d added Soilfixer biochar based SF 60 soil improver

This had dried out so before planting I soaked it. This took a lot longer than you might expect. I’d watered it for about 10 minutes with a sprayer but on raking it level it was apparent the compost below the surface was still fairly dry. A more serious watering was needed to thoroughly wet the compost. 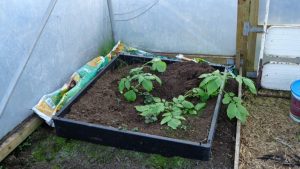 The compost then had a few handfuls of pelleted chicken manure and a couple of ounces of potato fertiliser, before planting a dozen seed potatoes, var. Colleen. The bed was topped up with four 40 litre bags of multi-purpose compost and then watered again.

Because it’s still quite chilly at night, I was going to cover the bed with fleece but that is in the big shed and I’d got an old newspaper to hand so used that instead for now. I don’t know why I bother really, one of the beds has a couple of volunteer potatoes growing really well. Perhaps a little drawn from the low light levels, but unbothered by the low temperatures! 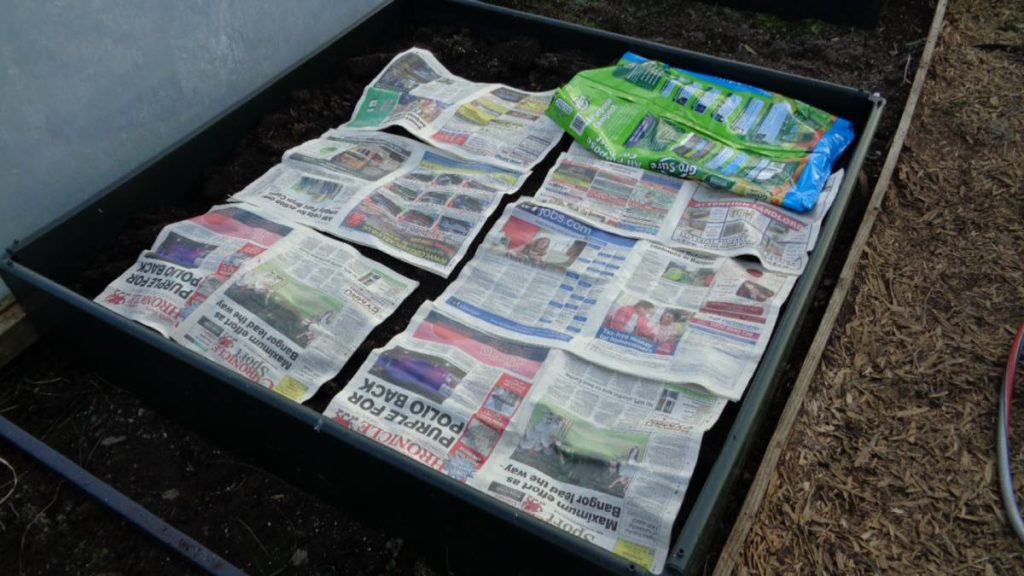 Made a very late start on preparing the greenhouse for the new season. The first job was to spray it inside and out with Algon. Usually I wash the glass like a window but it wasn’t dirty as such, just green with algae. The Algon will kill it and the glass should be clear in a week. There is a drawback though, it smells like I’ve dropped a bottle of vinegar in there! That will fade soon enough.

The staging that was moved out to make room for the cordon tomatoes last year went back in and some general tidying up. Then I set up some more propagators. I’ve a couple that are maybe 15 years old and a fairly new one that’s about 3 years old. They’re all fixed temperature but I’ve added thermostatic controllers that I picked up cheaply on Ebay. 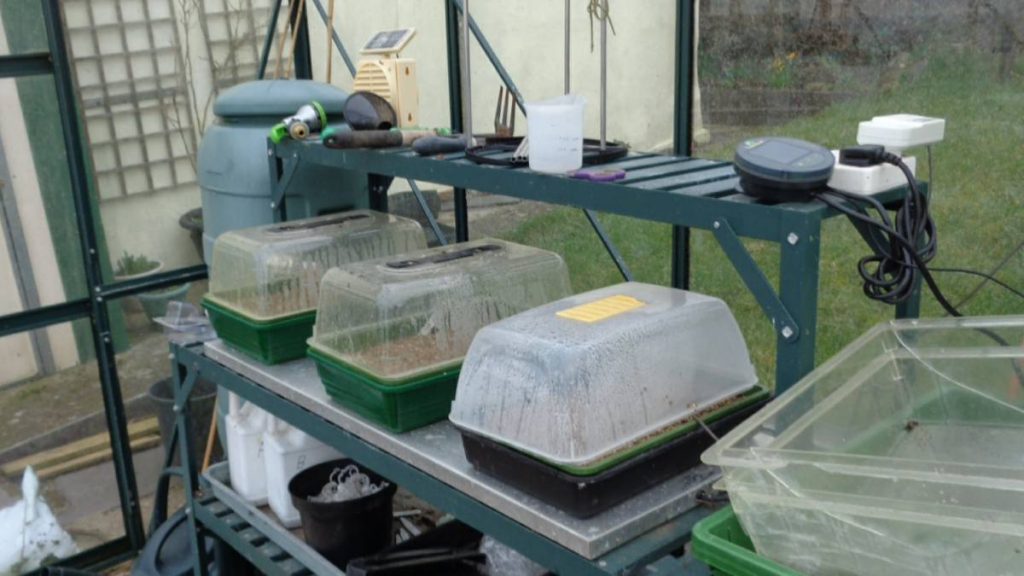 Finally I’ve a quadruple propagator from TwoWests that I’ve had since April 2008. The heating base and thermostatic controller are fine but I’ve lost two of the seed trays and the covers aren’t in great shape either. This was because the unit was in the greenhouse that blew down in 2013 smashing the seed trays. Still, I’ve other trays and covers, so not the end of the world.

Sowing and Potting Up

I’ve sown a couple of trays of Bedfordshire Champion onions. Possibly a little late but the seeds were at the ‘use them or lose them’ age. They’re in the greenhouse on the quadruple propagator at 25ºC along with some Brussels sprouts. They should come up pretty quickly. That’s the optimum germination temperature but once they show I’ll immediately lower it to 15ºC and then to ambient a few days after. 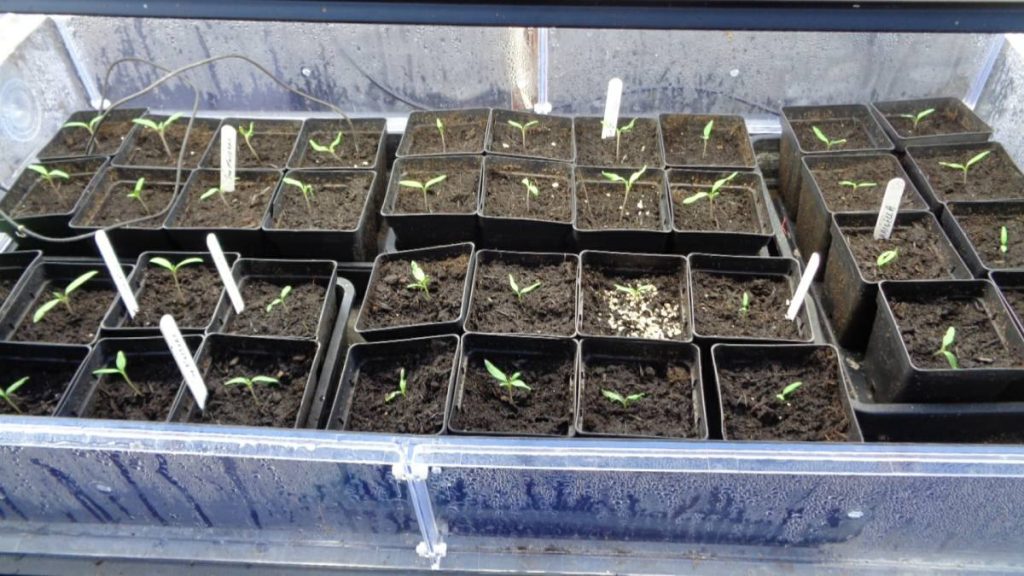 Tomato Seedlings in the Vitopod under Light

The tomatoes have been coming up thick and fast. I sowed them in small pots in the Geopod which was set at 24ºC. The Sungold & Black Krim tomato seedlings were first being well up and ready to transplant. They’ve gone into individual pots, which are in the Vitopod set at 18ºC, under supplementary lighting.

Next was the San Marzano to move up. These were followed by the Black Cherry and Craigella. I’ve already got far more plants than I’ve room for and I’ve yet to even sow the Red Alert or Heartbreaker! It doesn’t really matter, I’m bound to lose a couple and, once they’ve grown on, I’ll just give the surplus away.