No Spring, No Greenhouse Either

Like many gardeners, I’ve been waiting on the weather to get back to normal. We’re just past the spring equinox, when the days start to be longer than nights, and officially in spring.

Well the temperatures out there are anything but spring like and half the country is covered in snow. Late snows for a day or two aren’t that unusual but this year it’s as if winter has just not ended.

You can’t easily beat nature and if the season is going to be late, well that’s what it is. Sow later, plant later and hope things catch up, which they do more often than not.

Mother Nature has really struck one at us today, though. I lay in bed listening to the wind howling and thundering and finally just had to pop into my office come spare bedroom where you can see the greenhouse from the window.

Clicked on the super LED torch and realised the greenhouse was down. Not much I could do at 1am with the storm at its peak but go back to bed and hope I’d wake to find it was all a horrible dream.

This morning it’s no dream, the greenhouse has been completely blown off its base.  I ‘d had the house on a steel base but the wind had twisted it, throwing the frame out of true and causing it to lose panes of glass.

So I’d fixed it onto treated 2×1, drilling through the base bar and wood into the concrete base and using 6″ plug bolts. Staggering out against the wind to inspect, it was apparent that one side had been pulled up, causing the front and back to bend then pulling the other side. And I thought it bomb proof.

I got the propagators up into the shed but the Vitopod top has been smashed. Hopefully the electrics are sealed or will dry out. Trying to move the 1500 x 610 sheets of glass in the wind is well nigh impossible, the wind blew me over and I thought I was going to decapitate myself.

You could say I’m fed up today. 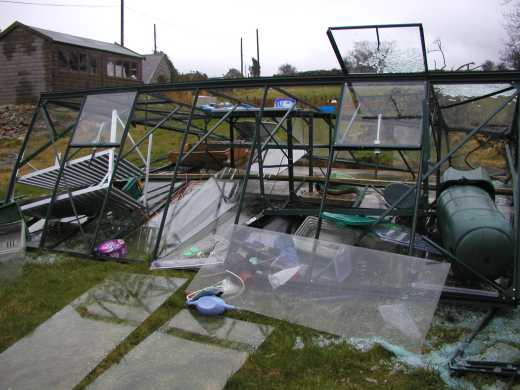 29 comments on “No Spring, No Greenhouse Either”

Leave a Comment Here on No Spring, No Greenhouse Either Cancel reply