The coronavirus is playing heavily on my mind. It’s a bit difficult to know what to say about it. I don’t want to spread despair and panic but neither should we be complacent. 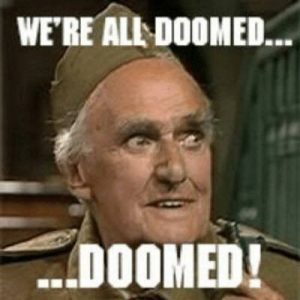 I’ve seen some absolutely mad stuff doing the rounds on social media and Youtube about coronavirus. Going on special diets will not prevent it.

Neither a Ketogenic diet nor a vegan diet will do it. Nor will massive doses of vitamin C – although taking vitamins may help general health and ability to cope with any illness.

On the other side, the preppers are having a field day, but this isn’t going to cause the collapse of civilisation. It’s not the time to take to the bunker.

And despite the great loo roll panic, it’s not going to mean empty shops and starving hordes fleeing the cities in search of their next meal.

I think we have to keep in mind that the people setting our government health policy are scientists and medical experts. This isn’t a Labour versus Tory situation.

They have failed to contain the disease, which shouldn’t come as a surprise. Most people who get this disease aren’t particularly ill. They may just feel a bit under the weather and so carry on as normal unaware they’re contagious. The current policy is to slow the spread in the hope the hospitals will be able to cope over a longer period.

Now, if I was young and fit I wouldn’t be bothered about this new bug doing the rounds. However, as we get older and start to suffer various illnesses things change. We become more vulnerable to infection. As the Prime Minister has said, people are going to die and we are going to lose loved ones.

My advice, for what it’s worth, is to follow the government instructions like washing your hands frequently and properly, which does provide some protection. But, if you’re vulnerable as we are, now may be the time to take special measures.

Limiting social contacts and keeping your distance from others will reduce the chances of catching it. Incidentally, this weird American elbow bumping instead of handshakes strikes me as contrived and silly. I won’t be shaking hands but a smile and a friendly hello will do just as well.

There’s no reason not to go to the allotment or not to chat with neighbours – outdoors with a 2 metre or more distance between people you’re pretty safe. The more you grow for yourself, the less you need to go out and buy. If things do get tough, being self-sufficient is going to get you through.

I mentioned the loo roll panic, which brings me onto stockpiling. Our distribution systems are able to cope with a level of disruption. The worst case I expect to see as a result of this is some shortages of imported fresh salads and vegetables. Spain – a major supplier to us – is not far behind Italy in terms of infection and disruption.

There is an argument for stockpiling that everyone else is panic buying so things will run out. Having said that, after a couple of weeks people realise they have enough pasta and toilet rolls to last a century and stop!

But if you don’t want to go out shopping and can’t get deliveries, it does make sense to keep a reserve in. We do this normally in any case. With our wonderful weather you never know when you could be snowed in for a bit. I think it’s sensible to prepare for being stuck inside for a few weeks. We’re both in the high risk group, so when it gets out on the local streets we’ll minimise our contact with the outside world and hope to avoid it.

More seriously as a threat to our food supplies, I read in Farmer’s Weekly:

Widespread flooding has left 35,000ha of farmland under water in Yorkshire and the Midlands, according to the Environment Agency. But an extremely wet autumn and winter has also left farmers elsewhere unable to drill crops.

We won’t starve but food prices may well go up because of it. Another reason to grow your own!

Leave a Comment Here on We’re all doomed! Cancel reply