My first attempt at growing sweet potatoes hasn’t been quite the success I hoped for. Not a complete failure though.

I’ve not grown sweet potatoes before. We quite like them occasionally but they’re not a natural for our cool British climate. Originally a South American crop, they came to Europe via the Spanish who enjoy somewhat warmer weather than we do. They were imported by King Henry VIII and reportedly a favourite. What the cost of importing food from Spain was, I don’t know. Probably horrendous, but that wouldn’t be a consideration for the Tudor king.

Anyway, I thought it was time to give them a go. They’d be in the polytunnel, warm and sheltered so a good chance of a crop. I bought in five slips, these went into water at room temperature which had a drop of Baby Bio houseplant feed and a quarter teaspoon of sugar added.

Pretty soon they developed roots and in early May I planted them out in the polytunnel. Three went into a raised bed and two direct into the border on the other side. One site visitor, Tim Inman, told me he grew them and the most important thing for sweet potatoes was heat. He reckoned his not just survived but thrived when the temperature soared to 118ºF – that’s 47ºC – in his polytunnel after he neglected to open the door.

Well the foliage grew well on the raised bed but not so well in the border. I think the problem in the border was I interplanted with a courgette that decided it was a triffid and grew huge, shading them. They were watered and fed occasionally with tomato feed. Temperatures were fairly cool this year, not a lot of sunshine to warm up the tunnel either.

Being as my back is still giving me gyp (being painful) I drafted in some help from a pal to tackle the urgent jobs, including harvesting the sweet potatoes. The crop was not exactly brilliant. A few reasonable sized tubers but most were smaller than a carrot thinning! 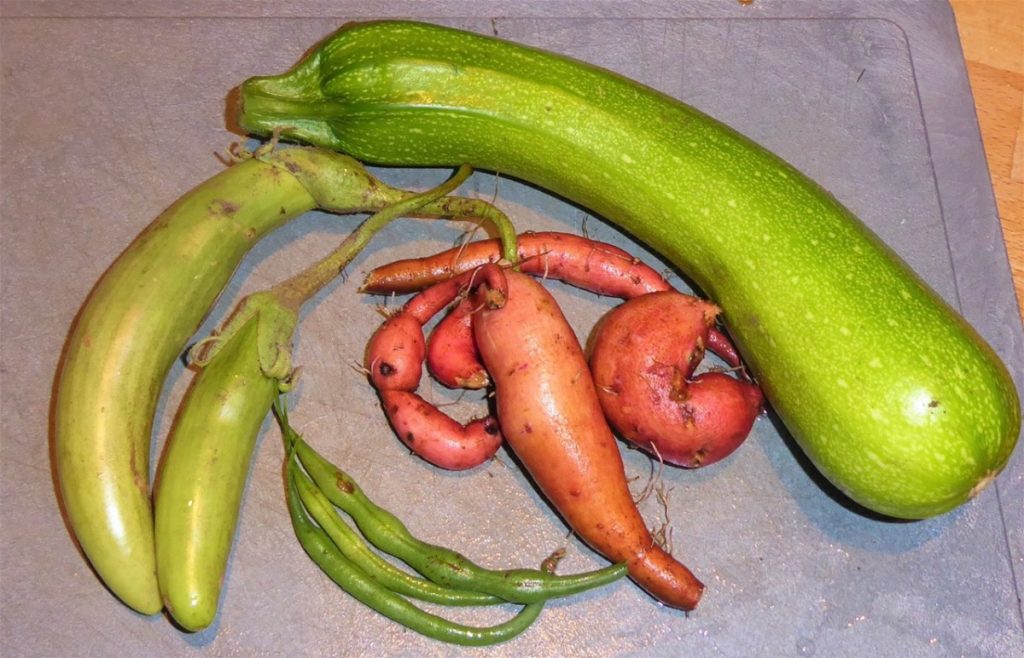 I’m not the only one to struggle with sweet potatoes. My friend Kathy grows in the balmy climate of Reading and her crop was worse than mine. She’s a great grower and usually gets excellent results but not with sweet potatoes this year. You can follow her blog here: A Little Bit of Sunshine 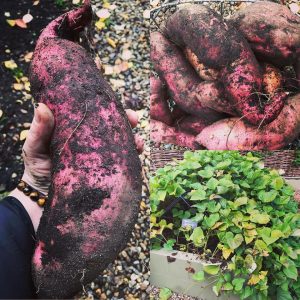 Some people have the magic touch, though. Harrod Horticultural popped a photo of their sweet potatoes up a week or two ago. They were grown outside in a sheltered vegetable garden, down Suffolk way.

I asked them how they did it and was told; plenty of sunshine, water and Maxicrop Organic Seaweed Plant Food. I reckon there was more – probably involving human sacrifice! Maxicrop is, I believe, 5:2:5 plus seaweed extract. Not too dissimilar to tomato feed.

Why did my crop disappoint?

I don’t know for sure – but that’s the fun in gardening, working out why things succeed or fail and trying a different approach next season. I know why the crop in the border effectively failed, over-shadowed by the courgette.

The raised bed had both home-made and bought multi-purpose compost in. There should have been more than enough nutrition in the bed to get them going. I was a bit lax over watering but I don’t recall the bed drying out badly. Where I probably dropped the ball was feeding. I should have fed more. Temperature I can’t control too much but maybe using fleece over the crop inside the polytunnel would have given me and extra couple of degrees at the beginning and end of the season.

Next Season – To Grow or Not to Grow?

The amount of sweet potatoes we eat is relatively small. Are they worth the cost and effort of growing? Most likely not. But I do like a challenge and it should be possible to get a decent crop undercover, even here in North Wales.