The weather was supposed to be dry and, most importantly, the winds low so arranged some help from friends and my son-in-law to finally get the new greenhouse glazed 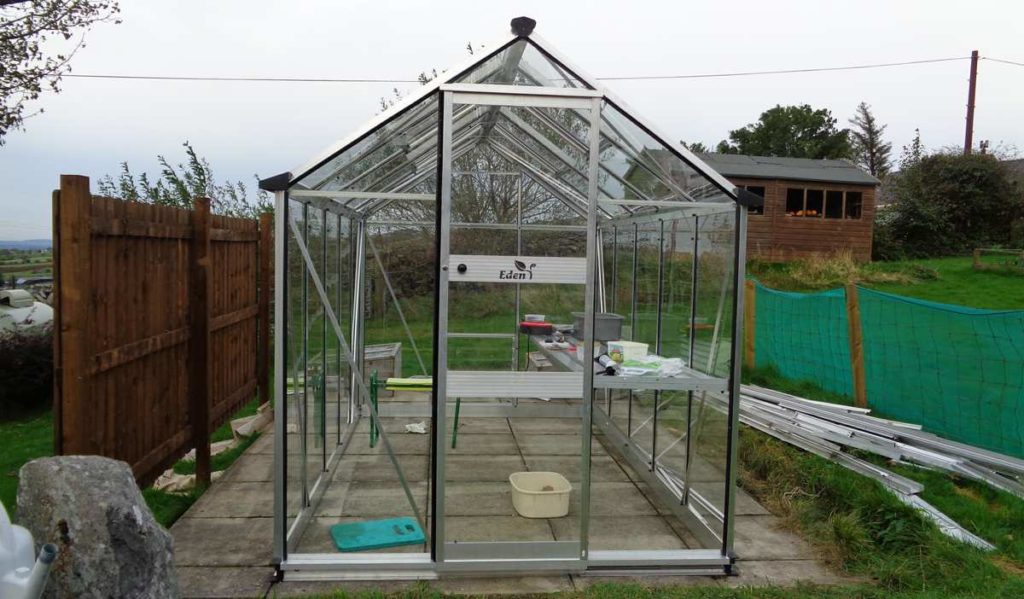 The completed Eden Burford Greenhouse – it’s even got glass! Note the windbreaks to either side and the frame of the previous greenhouse that blew down on the right. The black bar-capping holding the glass in looks rather smart as well as being very sturdy.

On the day, the wind was dead calm – hardly moving a thin branch on the willow tree. Better still it was sunny although we had a few showers in the afternoon. I thought it would take a couple of hours, maybe three, but it took five in the end.

The glass went in smoothly enough and the bar capping is not only a lot sturdier than W clips, it’s faster to fit. But there were some delays… The first was finding I’d put one of the door jamb supports the wrong way round. It didn’t take long to dissemble and rebuild properly but annoying all the same. I felt a right nit-wit!

The zero-threshold door sliding mechanism has changed. It’s actually simpler than it was to fix but the instructions are as clear as mud. For some reason it’s ended up a couple of millimetres lower than the old door so was very hard to slide. The draft-proofing brush at the bottom was holding it by dragging on the floor. After much fiddling and use of Anglo-Saxon we just pulled the brush out. Problem fixed!

Anyway, many thanks to friend Jon, son-in-law Gary and our great neighbour and friend Clive who sorted the door.

Still to do: fit it out, run power in and set up water butt. It’s been a crazy long haul but we’re nearly there now. 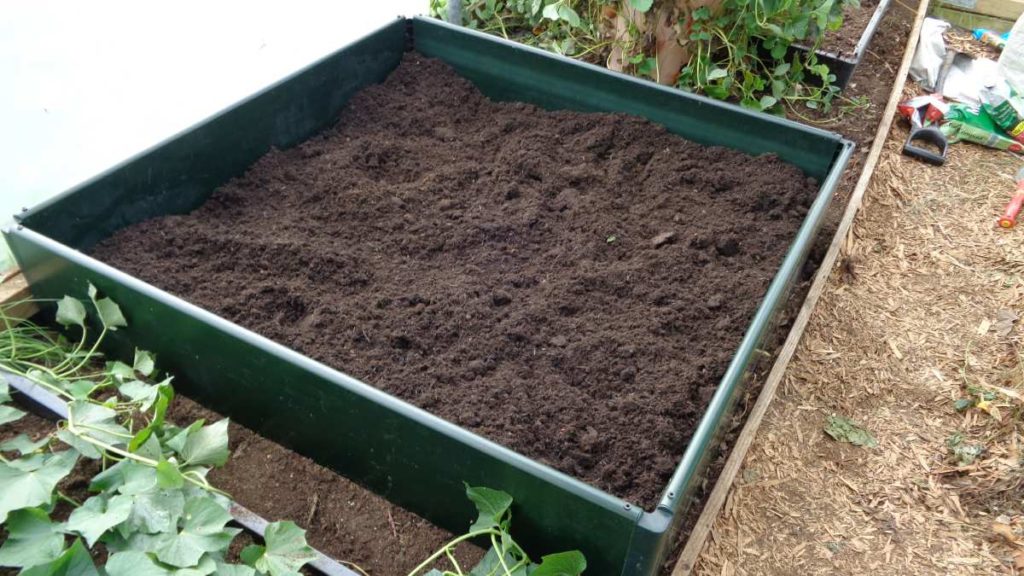 Gardenskill Raised Bed in the Polytunnel

I’ve been a bit of a fan of link-a-bord for many years. An easy way to build a durable, raised bed in minutes. However, I’ve found a better raised-bed building system at Gardenskill.com.

Their raised-bed system is made from weatherproof recycled plastic and comes in an attractive dark green, which looks very natural in a garden. They’re double-walled which adds strength but also insulates, keeping the soil a little warmer. Assembly is a doddle, a matter of a couple of minutes.

The beds come in two heights, 150 mm and 250 mm. I find the 250 mm height much better than the 150 mm. You can stack the beds for a 300 mm or 500 mm high bed. Even three tier beds are possible. Where these beds score is in the rounded tops. Not only do these look well, they lock the tiers together creating a very stable bed.

There’s a huge range of sizes available from 1 metre square to 5 metres by 1.25 metres. I’ve gone for a 1.25 metre square bed, 250 mm deep raised bed in the polytunnel for early potatoes followed by leeks. If you want they can build bespoke beds for you as well. They come with a 3 year warranty but I’d be surprised if they don’t last at least 5 times that.

Having had one bed, I’ve recommended them to my daughter for her garden which she’s gradually getting into shape. It’s covered in slate waste which grass has taken over. Despite that the drainage is poor. So the plan is for a raised bed border along the side, anchored with a deep planting box. It should look well and be very productive. More on this in the near future.