I must admit to being a bit fed up as I write this. I hoped to get the glass into the greenhouse but the wind is gusting too high and it’s wet. Again.

I’d got a pal and my son-in-law ready to come up and help. We’d have got the job done in a couple of hours. But it’s just too risky moving large sheets of glass in wet and windy conditions. The sides aren’t a problem as the windbreaks are working really well, it’s the roof. That sits above the windbreaks but, being sloped, the wind flows over so not a problem once glazed.

It’s lifting and fixing the glass into place above head height that is tricky. Yes, tempered glass breaks safe into thousands of bits but, in one piece, a large sheet can do you serious harm. Oh well, a job for another day… hopefully soon. 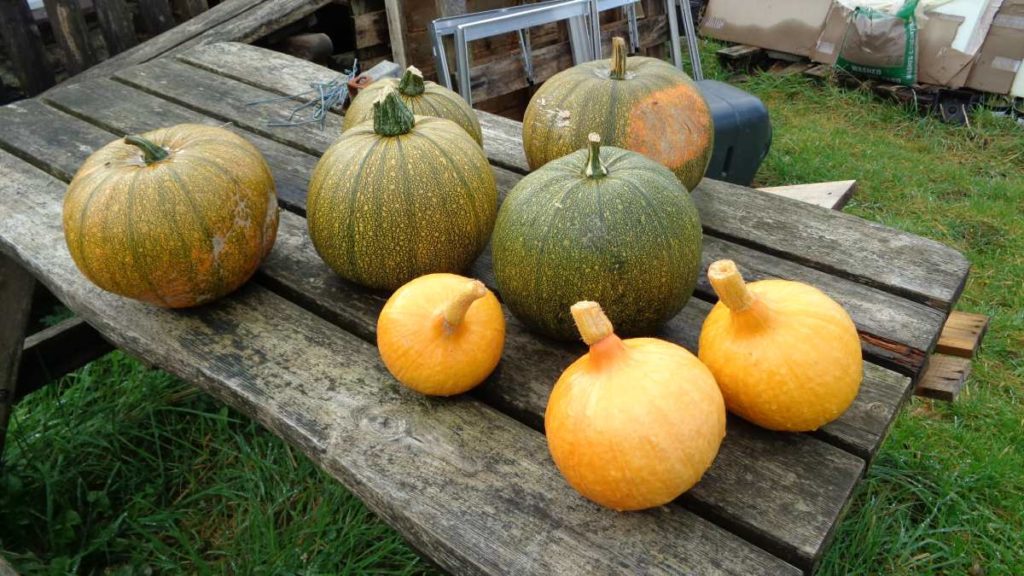 The courgettes are still coming thick and fast. Somehow I missed one that was ready and it’s trying hard to become a marrow! I’ll be glad when the plants give up – we’ve really had enough courgettes for this year.

Then we have the cucumbers. They’re getting a bit seedy now and not as large as when they first started but we’ve still loads. I’ve only one plant, Marketmore, and it really lives up to its name. The fruits have the little prickly spikes, but those brush off. Great flavour too and boy is it productive. 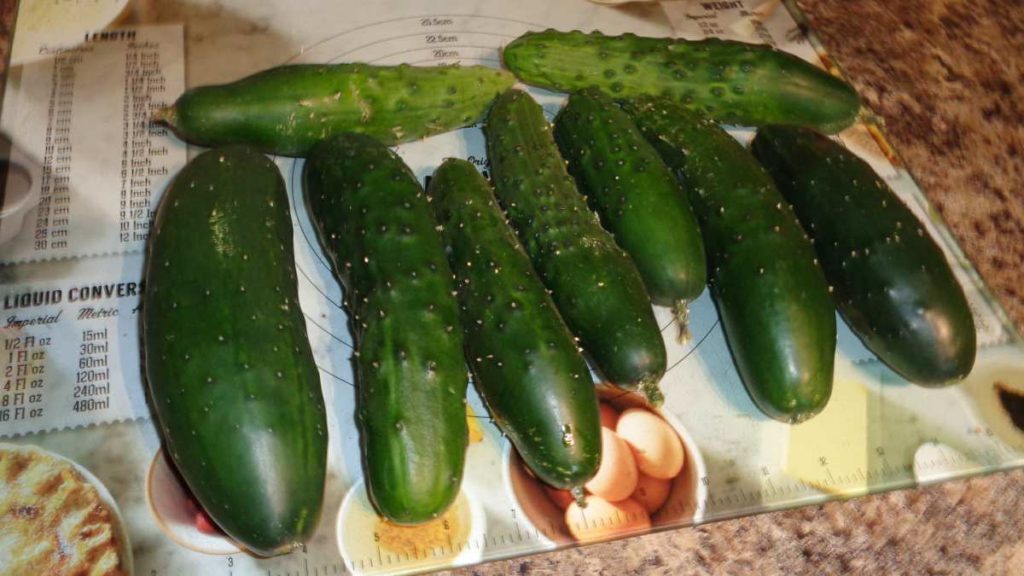 Luckily both pumpkins and squashes store well. The first batch, having been left out to cure, are now in our food store and a second batch are harvested and curing on the table.

I’ve managed to grow far more than we can possibly eat. We’ll give quite a few away, which is a pleasure in itself. One little fail, though – my grandson wanted a big pumpkin to carve a spooky face into and mine are quite small. Maybe I’ll grow him a monster next year.

Last year my broad beans were pretty much a failure. The germination rate was pathetic. They were from a reputable supplier, but I think the seeds were to blame. I did sow a load of field beans as a green manure and they did really well so I’m going to have a go at some autumn sown broad beans and peas.

We get very wet winters here, to match the wet summers, but the soil is generally well drained which makes a huge difference. Rather than directly sow, I’ve sown Aquadulce Claudia into pots in the polytunnel which I’ll plant outside when they show.

I’ll also try some autumn peas, Douce Provence, started in half seed trays. Most for outside and I’ll try growing a few in the polytunnel. A bit risky in the tunnel as they’re likely to come down with mildew in the humid winter months. Still, gambling a few seeds won’t break the bank.

I’m keeping things simple for a change. All I intend to grow is Solent Wight and Elephant garlic. Most will go outside in a raised bed but I’ll plant a few Solent Wight in the polytunnel as well.

I’ve also got some autumn planted Japanese onion sets coming, Senshyu Yellow. One of those varieties you can bank on. Once again, most for outside but I’ll grow a few in the polytunnel.