Garden Diary › Allotment Garden Diary › Taking it Easy – Catching up on my reading.
Free Seeds when you buy Our Bestselling Books

Taking it Easy – Catching up on my reading.

The weather can best be described as foul. If it isn’t raining it’s windy and cold and if it is raining, it’s wet, windy and cold. And as I write, Storm Deidre is rampaging ashore having already hit Ireland. So I’m taking a bit of a home holiday and catching up on some reading.

Catching up with books old and new

I did pop some book reviews up for the modern ones I’ve read recently. I’m also re-reading some older books – it’s surprising what you forget over the years. 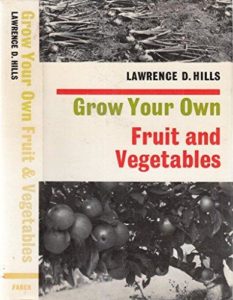 Lawrence Hills’ Grow Your Own Fruit & Vegetables from 1971 has been one of the biggest influences on my growing.

OK, some of the varieties he mentioned are no longer available but carrots are still carrots and apples still apples. If you find a copy second hand, it’s worth reading. There’s a copy on Abe Books for just £3.52 delivered!

It isn’t just the masses of tips and information but his unassuming style that makes it so easy to read. I had the honour to meet him once and that’s how he was, unassuming but brilliant.

That was in Bocking where the name for the famous variety of comfrey, Bocking 14, comes from. 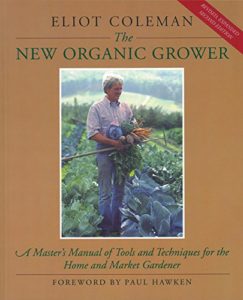 I’ve just started Elliot Coleman’s New Organic Growing from the USA which is a book I fancied reading but couldn’t afford when it was new back in 1990. That was before the internet made it possible to find most any book second hand at an affordable price. It’s aimed more at market gardeners than home growers but interesting nonetheless.

He’s very into soil blocks for starting off plants, something I’ve never got on with. I tried soil blocks years ago and they usually fell apart or killed the plant by drying out faster than I expected.. and then fell apart.

It’s a little like John Seymour’s Complete Book of Self-Sufficiency in style but very targeted at serious small farming and market gardening. Seymour’s classic was very much for dreamers whereas this was for those who intended to make it happen.

Outside there’s not much happening, apart from the weather. The leeks have done well although I’d have liked a little more blanch on them. Still, they’re flavoursome and plentiful so I’ll count them as a winner.

I took a nice, if a little small, cauliflower out of the brassica tent the other day. I don’t know what variety they sell in the shops, but the shop bought are not a patch on home-grown flavour. The leaves were hung up in the chicken run and kept them happy for two days.

Once this storm has passed I think I’ll start harvesting Brussels Sprouts. The sprouts at the bottom of the stalks seem ready and the ones at the top are coming on ready for Christmas. It’s funny, I used to hate sprouts until I grew my own. I can’t remember why I decided to grow them but I’m glad I did.

The field beans, which were sown as a green manure, are popping their heads up. I was a little worried about them as they were a bargain buy from Ebay. Cheap seeds are not a bargain if they don’t come up.

6 comments on “Taking it Easy – Catching up on my reading.”

Leave a Comment Here on Taking it Easy – Catching up on my reading. Cancel reply