I’ve got a new greenhouse on the way – it should be arriving on Monday next. Since I’ve already got a decent greenhouse, a solar shed and a polytunnel this may seem a bit over the top but I have my reasons. 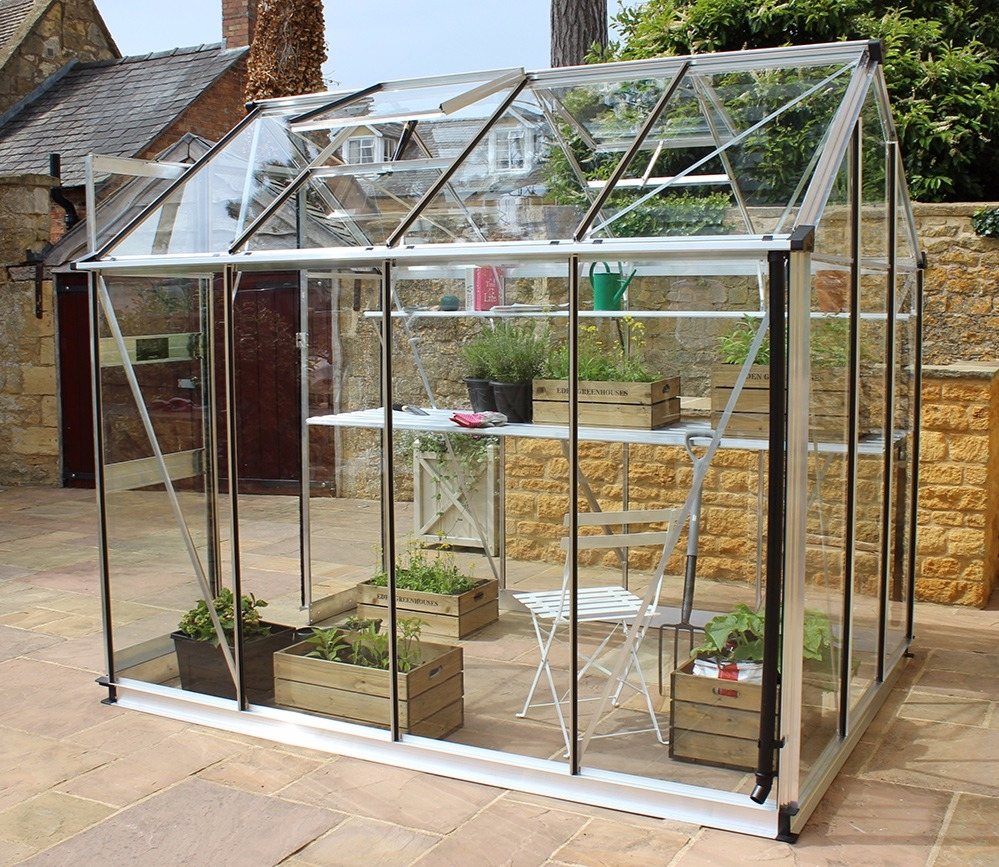 Eden Burford Greenhouse – this is actually an 8×6

Before we moved here, I actually had three greenhouses. A 10 x 8, a 6 x 8 and a 10 x 5 lean-to. So I’ve been running with a bit less greenhouse space than I had before. Since the weather here is challenging – albeit wet and windy, rather than freezing – space where you can work in shelter is really useful.

I’m not forgetting my fantastic polytunnel, but I use that differently to the greenhouses. It’s also quite a distance from house – not a fun run when the rain is pelting down or, worse still, flying horizontally.

I’ve got a large slabbed base already where my first Vitavia greenhouse stood, until the storm turned it into a surreal sculpture of twisted metal and broken glass. The second is in a more sheltered spot. There’s plenty of room, about 16 x 10 ft on the base, so I could get quite a large greenhouse there if I wanted.

How Large a Greenhouse to Get

The first question has to be how large a greenhouse to get. Normally I would say to always go for as large as you can but, keeping in mind what I already have, that would be overkill. Not to mention beyond my purse.

I’m also thinking I may keep this greenhouse frost-free and the bigger the volume the more it costs to heat. After mulling it over, I’ve decided a 10 ft long by 6 ft wide will serve my needs. It will also leave room on the pad for some coldframes and for setting out plants when hardening them off.

Which greenhouse to get?

That’s where it gets harder. I know it has to be tough, tougher than the Vitavia which is a good greenhouse but not one designed for the wind speeds we get too frequently . It must have toughened safety glass.

If my impulsive grandson were to run into it, a pane could break but because of the way tempered glass breaks, be unlikely to cut him. I’d never forgive myself if he was badly hurt here. I still remember running into a window when I was young and smashing through it. Not the accident so much as the look of terror on my father’s face. I was about 7, an age when fathers are not beings who should ever be scared, even of monsters.

The rigidity of long panes as against stacked horticultural glass adds to the structural strength somewhat. Another factor in their favour.

It’s simple enough, I’ve got some spare cash but not a huge pile to play with. You can easily spend a couple of thousand on a greenhouse – if you’ve got it, that is!

I decided to get some advice and spoke with a chap at Gardensite who, after I’d explained our situation, suggested an Eden Burford would be the best choice. One point he highlighted is the problem of winds blowing open the door and the wind getting in. That’s a killer for a greenhouse in a storm. The Eden has a no-step lockable door that won’t blow open.

The frame is a step up in strength from the standard Halls or Vitavia greenhouse so that should resist twisting in the wind. I’ll also take extra measures to make sure it doesn’t lift even if the wind should get in. The very strong ridge bar is designed to enable hanging things from it, which opens up some possibilities. The main thing for me is strength throughout.

In some ways I think I would have preferred bar-capping to hold the glass but W clips are very effective and I’ve a load of spare ones so I can double up to really secure the glass in a storm.

My weekend job – when we should have a dry Sunday at least – is to clear the remaining pallets sitting on the base and weed between the slabs. Fingers crossed!