I wrote this article on no-dig gardening versus digging last year for Home Farmer magazine, sadly no longer with us. Since there were a few comments on my proposed no-dig experiment in my last post, I thought it may be worth popping the article up here, slightly altered for the web.

To Dig or Not to Dig?

I know as I sit down to write this that no-dig growing is one of those subjects that people get passionate about on both sides. It’s one of those internet forum topics that can get quite heated, to put it mildly. So, with some trepidation, my thoughts on the merits of the different systems.

No-Dig Growing Systems are Not New

First of all, no-digging is not a new idea. Parisian market gardeners in the 19th Century used a no-dig method, adding huge amounts of horse manure to their plots. In this country Albert Guest wrote Gardening Without Digging which was published in 1948, followed by Dalziel O’Brien in his Intensive Gardening of 1956 and James Gunston published Successful Gardening Without Digging in 1960.

Currently the best known champions of No-Dig gardening are Bob Flowerdew who practices it in conjunction with a raised bed system and Charles Dowding.

Why does anyone dig?

This does beg the question ‘if no-dig growing is so good, why does anyone dig over their plot nowadays?’

Many growers have seized on no-dig as an easy method of growing with the least and lightest work. However, the no-dig system is not without work. It requires a lot of compost and this may be more work producing than digging over would be.

Typically, no-dig systems involve the addition of 5cm of compost onto the growing beds annually. An average 250M2 (10 rods) allotment plot would require 12.5 cubic metres of finished compost each year. That’s a very large amount of compost. The system is usually combined with close-spaced planting and mulching to avoid bare ground.

In essence no-dig cultivation is very simple, composts and manures are lain on the surface and dragged below by worms, emulating the natural cycle where animal manures and dead plants, leaves etc. are just deposited on the surface. Some commercial market-gardeners have adopted the system with great success. 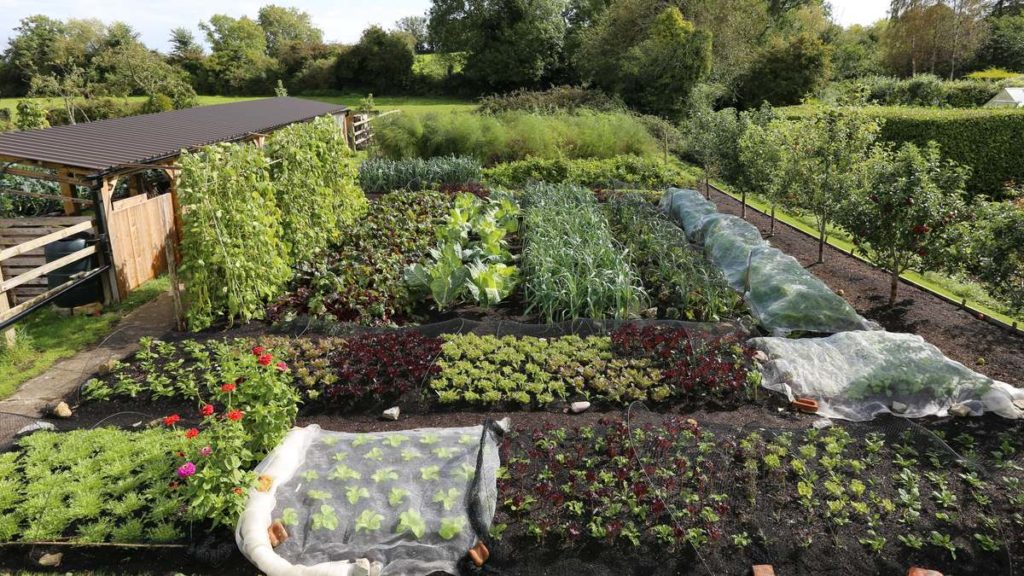 The initial dig is carried out by double digging. Here the topsoil is removed to either two spits (a spit is a spade depth) or to the level where the topsoil ends and the sub-soil begins.

The sub-soil is then broken up with a fork before manure or compost is laid in the trench above the forked-open sub-soil. This will percolate down into the sub-soil, encouraging worms and micro-flora to convert the sub-soil into top soil. The removed top soil is then replaced above it to dig the next trench.

Annually the soil is dug over to at least one spit deep in the autumn and left in large lumps. In the winter the freezing and thawing action breaks down these lumps into a finer consistency. In the spring this is further broken down with a cultivator and raked to create a fine tilth for seed sowing and planting.

Lime is just spread onto the surface to wash into the soil over the winter.

Cultivation with digging is a system that has been used for hundreds of years and is proven to produce good results. Digging over, especially double-digging can be hard work but with experience it does get easier.

Benefits of Digging and No Digging Methods 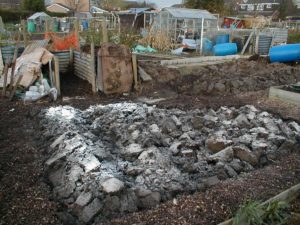 Plot Dug Over and Limed 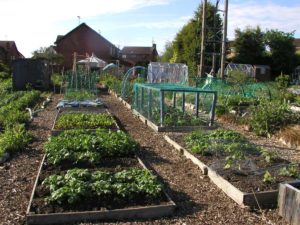 Most green manures that require digging in are not really compatible with a no-dig system but field beans can work well. When ready, cut the stem at ground level and compost the top leaving the roots in situe.

Mustard, so long as the plot is clubroot free, can also be useful. Just leave it standing until the first frosts kill it off allowing the stems to fall onto the ground. By the spring the worms should have dragged them into the soil but just plant through any left. 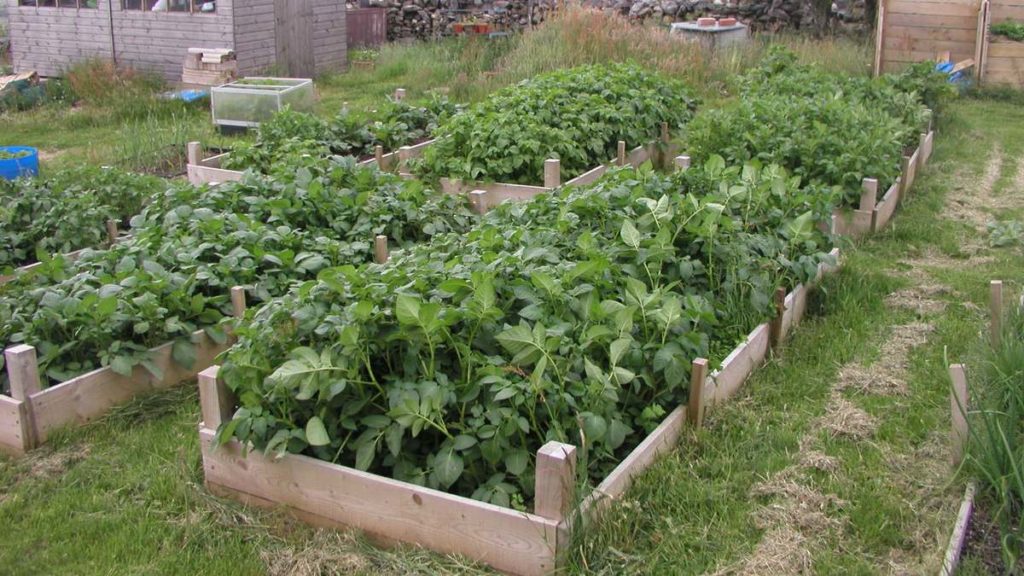 Raised Beds in my Field Plot

These are very popular and on some allotment sites nearly all the plots are on this system. In essence they’re not any different to no-dig systems except they get off to a flying start in year one due to them having a good depth of light top-soil & compost. I use these myself primarily for root crops.

This is basically just a sheet composting system. Some of the variants I’ve seen are quite frankly ridiculously complicated. I’ve wondered if the proponents are just having a joke at the expense of the gullible. Still, each to their own.

Trials and Evidence on No-Digging Systems

Sadly I am not aware of any long-term research with comparative trials of the different systems apart from the Chase trial and that was back in 1947. Do let me know if you know different. What we do have is reports from individual growers and their experience along with some educated thinking to evaluate and compare different soil management practices.

The Chase No-dig vs Digging Trial

Mr Jocelyn L H Chase ran the trial at their Chertsey trial grounds over a period of 7 years. A plot was divided into two with half being run on a digging system as before and the other half on a no-dig system. Both were run organically.

Compost was applied equally at a rate of 30 tons per acre (approx 7.5Kg/M2) being spread on the surface of the undug plot and dug in with the other. The compost used on both plots came from the same heaps and was presumably identical in nutrients etc.

There was little difference between the two methods for the first three years although legumes and root crops did not do as well on the no-dig system other crops such as cucurbits and tomatoes performed significantly better.

In the fourth year of the trial the no-dig plot suffered a crash in fertility from which it did not recover during the trial. The conclusion drawn by Mr Chase was that a hybrid system of no-dig with triennial digging would be worth considering.

Interestingly the ladies who actually  conducted the trial and who both held a BSc. (Hort.) commented that they felt additional weeding on the no-dig plot outweighed the labour saving benefit of not digging.

This was reported in the HDRA No-digging Report No 1 of 1969 produced by Lawrence D Hills. Apart from the Chase trial the rest of the report consisted of member’s experiences.

N.B. Some of the no-diggers also reported fertility crashes after 4 to 7 years.

Based on my experience and research on the subject I would advise those growing on heavy clay soils to stick with conventional digging systems, preferably with double-digging at least every four years.

Those with lighter soils already in good heart with plenty of organic matter in them could well find a no-dig system productive and profitably use the time and effort previously devoted to digging in the production of more good quality compost to improve their plot. Because of the possible fertility crashes reported with some no-dig systems, incorporating a digging every four or five years would seem prudent. 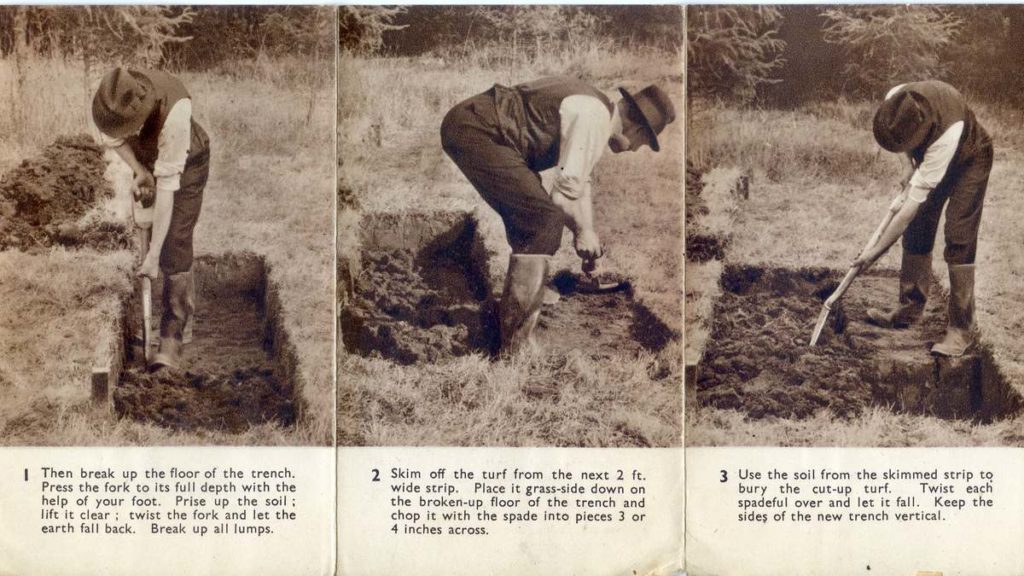 From the 1945 Dig for Victory Leaflet – How To Dig

For breaking new ground to grow vegetables, I would suggest that the proven digging system is generally best employed if possible but a lot depends on the initial condition of the land.

Compacted soils or shallow top soils will certainly benefit from an initial double dig but open deeper soils and lighter soils may do just as well, if not better, with a quick forking to open the surface and removal of perennial weeds followed by a deep compost mulch.

“We’re not concerned with proving whether any of the authors whose books are bibles for each separate cult of no-digger are ‘right’ or ‘wrong’. Our purpose is to find a blend of old and new methods that will help us garden with least and lightest work”

22 comments on “No-Dig Gardening vs. Digging”