Next year I may bring some more land into production. I’m thinking about experimenting with a different growing system based on no-dig 30 inch (75 cm) wide beds. This is a system being used with success by the new wave of permaculture and regenerative agriculture market gardeners. 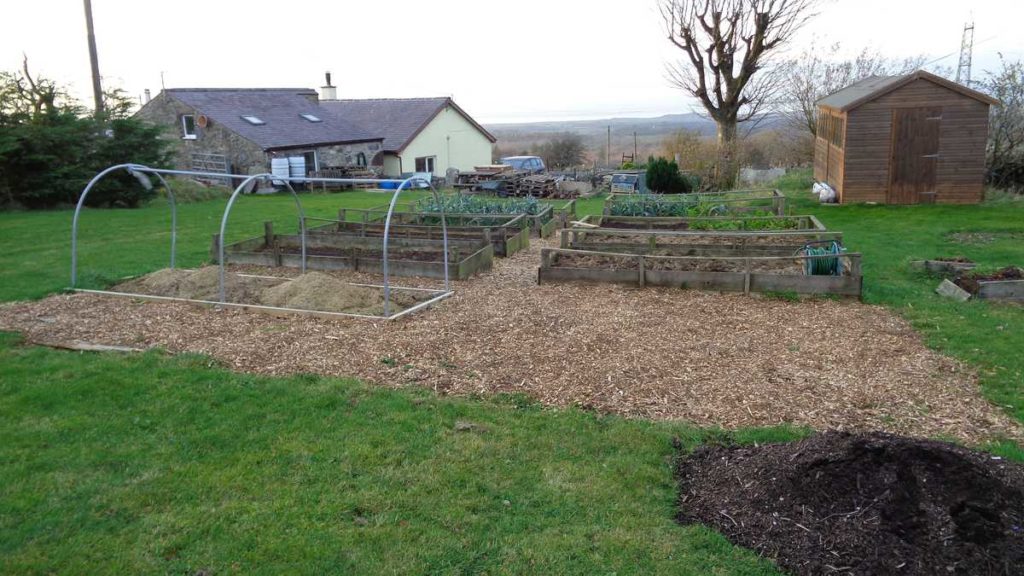 Raised beds in the field plot with the woodchip covered area I’m thinking of bringing into production in the foreground.

These are people who are not experimenting or blindly following gardening theories – they are making their living growing crops to sell in a way that improves rather than degrades the soil. Rather than trundling hugely expensive heavy machinery around fields, this method is geared for production using hand tools and small scale machines like rotavators.

Is it a good system for home growers?

I’m not trying to start a market garden but the question I’m trying to answer is how useful this method could be to allotment holders and home growers. I’ve used and am using deep raised beds with success but they have their drawbacks.

The 30 ins bed system is narrow enough to step over and even straddle to work on. Because they’re easy to cross, they can be as long as you wish. Some of the commercial growers use 50 ft or even 100 ft bed lengths. They generally don’t need retaining walls because the compost is added initially in a 10 cm layer and after that in annual 5 cm layers.

Limitations of the system

Because our soil is so stony and compacted I know this narrow bed system won’t work for root crops like carrots and parsnips. They’ll just hit the rocks and fork. I should be able to make it work for crops like salads, onions, swedes, turnips etc. though.

There is a further complication I need to consider. The field area is very exposed to the wind and, boy, do we get wind here! That rules out crops like sweetcorn, climbing beans, peas and even broad beans are a bit dicey unless supported.

I’ve planted trees around to break the wind but the only ones that have grown enough to be useful so far are Leylandii. They’re not a bad tree in the right place but I don’t want too many of them dominating things.

If I was to dig the ground over and pick out the stones that would enable root crops in a narrow bed system but it’s a difficult and slow job. Just getting the spade into the ground is hard as the blade stops going in when it hits a stone. I could possibly rotavate. Getting it to bite in is hard but it does cope with the stones – well the smaller sized ones. Still time consuming to pick out those rocks though.

The plan at the moment is to mark out the beds, scrape off the woodchips  covering the area and then fork them. Not fork over, just stick the fork in and rock it back and forth to open up the compacted soil. If I get to it this year I’ll cover with cardboard and then a layer of compost about 10 cm (4 ins) deep.

I think it will work out but until I’ve actually given it a try for a couple of years, I won’t know for sure. Theories are great but experience proves or disproves them. Incidentally, I still believe that raised deep beds have their place but have become over used. If you’ve a large area of good quality, deep soil there’s not a lot of benefit to them.