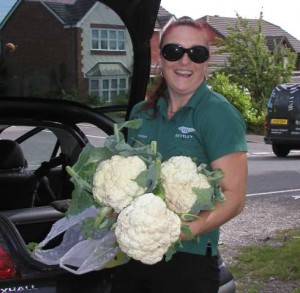 We dropped down to the plot after work and were greeted by Karen who was all excited about her cauliflowers. “Yes” she said, “I won £10 million on the lottery but look at these cauliflowers, aren’t they brilliant” Yes, they are brilliant but sadly she didn’t win the lottery really (so I couldn’t ask for a loan). Well done – excellent result.

Val headed for the strawberry bed, which has been giving us enough for a pudding nearly every day. When we got back from holiday we had 6lbs in one go, they’ll go for jam.

I headed for the potatoes and took up a row of the first earlies, Swift. A few had slug damage and three split potatoes from a plant at the end of the row, but otherwise perfect.

I love harvesting potatoes, it’s so exciting to see what will be under the leaves when the fork turns them over. Bit like playing cards, will it be an ace – a load of great spuds or will it be a joker – a few slug munched tiddlers. 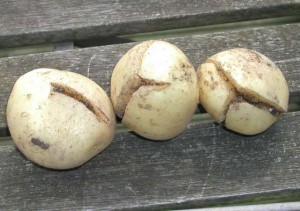 As I said, we had 3 splits from a plant at the end of the row. I was asked what causes splits and the answer is uneven watering. Basically, when it is dry, the potato tubers stop growing. Potatoes are, I think, something like 75% water so no water, no growth.

It’s not a total loss, they are usable if you use them quickly as they won’t store well.

Whilst I was digging up the potatoes, Val lifted the onions on plot 5. These were planted from sets and I’ve been surprised by how well they’ve done. There have been some bolters but, in the main, they’re fine.

I’d scrounged some scrap wood from a builder who also gave me the decking and some weldmesh covered gates.  I stupidly gave one of those away as I could have used 2 of them to lay the onions out on.

The shallots have done really well, I planted two types and one has given quite a number of small shallots and the other has given less in number but larger sized shallots, almost onion sized.

The garlic is ready now and I made a start on harvesting that. Some is a little over and the bulbs have split into cloves but that’s OK. We’ll use the split ones first. We actually had quite a lot chopped into a stew for dinner later. Wet garlic as they call fresh garlic is quite mild but very flavoursome.

I took quite a few photographs and these are now on the site: Allotment Photographs July 2009