Saturday was the National Vegetable Society meeting so it was up to Preston in the morning for the day. I’m pretty sure the members of the society haven’t a clue what goes on in the background on their behalf.

Some years back I was chatting to the chairman of a large company I worked for about a meeting during a break to allow tempers to cool. He said to me he would me more worried if nobody cared enough to get angry. Well the national committee of the NVS certainly care, although they actually keep it more polite than that company I worked for.

There was a time when I’d have spent 3 hours driving and a day in a meeting with plenty of energy left when I got home. Nowadays I fall onto the settee and turn into a vegetable in front of the idiot box until bedtime.

I kept seeing all these adverts about green Britain and the Olympics. Must admit to wondering what’s going on. We have a French energy company, who run lots of nuclear power stations, appealing to our patriotism to push a green agenda. Maybe I’m getting cynical,

Sunday started with sunshine and refreshed after an early night I thought I’d head for the plot. Of course that was it. Down came the rain! It did pass over eventually so late afternoon I headed for the plot.

The first task was the paths on plot 29. When I took it on it had a number of raised beds with paths between and half the plot was covered in marestail. I used Amcide to clear it but marestail is pretty persistent stuff and has crept back in from the adjoining organic plots. In fact it’s spreading all over the site now and I even found a few spikes on plot 5 the other day.

Well it’s quite thick on the paths so, since Amcide is no longer licensed, I sprayed with glyphosate made up to about 120% of the recommended dilution. As a rule you should always use herbicides and pesticides as per the instructions but marestail is such a swine that I felt justified.

The paths could do with some more wood chippings and we have some available on the site but I want to knock the marestail down first. I really don’t like using sprays but this is the only practical solution for the paths. 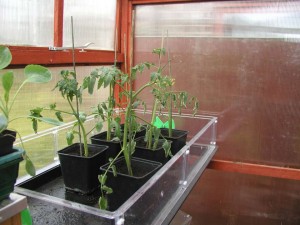 Tomatoes from side shoots

Next job was to feed the plants in the greenhouse. There’s a tomato colouring up so any day now, our fresh tomatoes will be in. Cucumbers are starting as well, won’t be long now.

I’d potted on some side shoots from the tomatoes and these seem to have taken. I think they’d have done better if the weather had been cooler but they should be OK, The idea is to have later plants producing when the first lot are waning. Bit of a back up as well in case the main lot get blight or something. The photo is the of them in the Vitopod in the home greenhouse. It’s a fantastic bit of kit,

The next job was to clear one of the large compost bins on plot 29. These were on the plot when I took it on and have two bins, about 3′ by 6′ with sides made from corrugated iron sheet.

There was about 2 cubic yards of old compost in there, barrow load after barrow load went onto the main bed ready to spread out next year. Should have been done last winter so I’m officially 6 months behind with this job!

Having cleared the bin, I then built a new heap in there with all the foliage I’d piled up ready. Basically 6″ layers with alternating prilled urea (a high nitrogen fertiliser) and lime (to keep the pH up). Watered well as the material had dried out in the wonderful weather.

Headed home just before 9pm and if I thought I was tired on Saturday then on Sunday I was near death! Still, a good sort or tiredness and ache after exercise rather than the tense clutching of a steering wheel.