Well the heatwave has broken, I hesitate to say thank goodness but it was getting a bit much. The plants seemed to be loving it but the gardener was beginning to melt.

Now the trouble with growing is that plants don’t work to our timetable. They don’t have holidays and busy periods of work that keep them off the plot. Neither do they care if it’s pouring with rain or boiling hot – they just keep growing.

So this is not the ‘correct’ or best way to do things by any means. It’s how I’m coping with catching up after a crazy start to the year that’s thrown me way behind.

The large bed on plot 29 was earmarked for brassicas and having got the annual weeds hoed off, it needed preparation that should have been done in the winter really.

Out came the Merry Tiller and I ran over the bed a few times. The soil on this bed is about the best on my plots. When I took on this plot it was hard, compacted clay covered in sand and gravel but deep digging and incorporating masses of organic has turned it round.

Now it’s pretty friable so I can get away with the tiller breaking up the surface. To avoid it bouncing over the surface, I ran it as slowly as possible initially. This enables me to restrain it so it digs in rather than running away across the surface.

The second pass was slightly faster and the third was done at full speed, breaking up the clods into a fairly fine tilth. Another plotholder commented what nice soil I had on this plot. If only he knew what effort has gone in to get it there over the last years.

Having broken it up to about 8″ deep and incorporated the remnants of last year’s garden flowerpots compost, roughly levelled with the rake and then applied a good dose of garden lime.

Another run over the bed with the tiller and the lime was well mixed in to the soil. Now the weather forecast has been for some quite heavy showers but we seem to have missed out, just some light rain. I’d have liked it to get a good soak but what nature gives it was we get.

On Sunday it was time to plant out the brassicas that were pushing out of their pots. Actually, they were less pot bound than I’d feared judging from the top growth. It took nearly as long to erect the cage to keep the evil pigeons off as to actually plant out.

I’ve got side frames with netting stapled to them which run down the sides and then I drape a net over the top, using 8′ bamboo canes to stop the net drooping onto the plants.

I’ve got more sprouts than I want so gave some plants to Janice and Gianni from the next door plot. They’ve both been working really hard and have fallen behind a bit as well, so she says. It looks in apple pie order on their plot to me though!

So, sprouts Falstaff (a red variety), Revenge, cauliflowers Pavillion and Aalsmeer, unknown red cabbage are in the ground. I’ll give them a high nitrogen feed later in the week to really get them going.

Andy arrived just in time to help me get the net over. I can do it on my own but it’s a lot easier with two people. His plot is looking good but annoyingly for him, his calabrese have gone to flower. With calabrese,  they’re ready one day and gone over the next. His cucumbers are doing really well and he gave me one. Excellent! Wish he could remember the variety as I’d give it try next year myself. 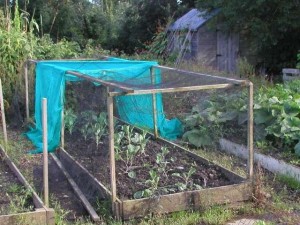