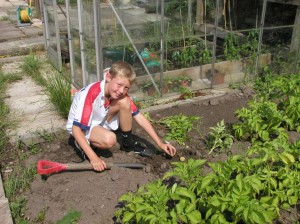 Monday started with a visit to the plot but with a photographer from the Sunday Telegraph. I must admit to being surprised by their interest in little old me but there you go.

I must admit to being a little better dressed than usual on the plot, he did say the suit and tie were a bit OTT so settled for a clean shirt and chinos! My usual attire on the plot has resulted in people throwing 50p at me to get a cup of tea!

Back home for some lunch followed by some more work and then back down late afternoon to take a cut off the comfrey on plot 5. Monday was not just hotter than Sunday but also really humid. Dripping with sweat by the time I actually got to the plot. You do need to be careful in this weather. We’re just back from 2 weeks in the sun so are somewhat acclimatised and brown. Well, Val’s brown, I’m just less pale.

I take a flask down with me so a litre of icy squash to keep me going. Cold beer is nice but not when you’re working, especially using edged implements!

Therese was down with her son and she’s got the right idea. She’s got a few plastic glasses and a bottle of squash so plenty of liquids to drink. He was digging up potatoes. I love seeing children getting involved on the plots. They’ll lose interest when they become stroppy teens but later in life the gardening bug strikes again. Well that’s how it worked with me.

I did a little more weeding and then cut down the comfrey on plot 5. The comfrey will go onto the compost heap along with the weeds from the potato beds. Comfrey is so chock full of nutrients it works as an activator in the heap almost as well as manure. If you’re wondering what on earth this comfrey stuff is that I keep rambling on about, there’s an article on the site: Comfrey

Back home after cutting the comfrey, feeling washed out. In hindsight, I think I may have been better to have gone down later when things had cooled off a little more. My friends in Spain had it worked out to a tee. They kept their large vegetable garden by going out at 6am and stopping around 10am or 11am. Lunch was cooked on an open fire outdoors with a little wine (OK, we had quite a lot) followed by a sleep and then back out to the plot around 5pm until 8pm.

They even had an outdoor shower with the water fed from the cold tap via a black hosepipe snaking over the garden. The only thing to watch out for was it got too hot and you had to run the water off to get it cool. The run off was channelled into rows to irrigate the plants.

Sadly, I don’t think our summer will last so hot for quite as long as theirs does.