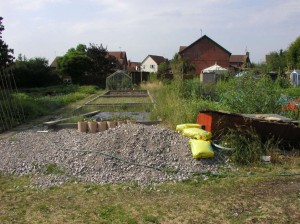 I took a walk around our allotment site the other day and noticed a worrying trend developing. Some plots are beginning to resemble patios and building plots with permanent structures rather than allotments.

Now if you think about it, allotments are essentially pieces of land we rent to grow on for a period of time. That period could be a lifetime or just a year before one tenant leaves and another takes over.

At the same time, the tenants are all different. Some may want to grow in a greenhouse, some in a raised bed and some just in the soil. The guiding principle has always been to keep the plot in such a way that the next occupant can move on, clear the plot and grow what they want.

With my plots, the greenhouses are set on wooden sleepers and there are some raised beds with paths covered in wood chippings between. So when I eventually give up the plot, and I will, whoever takes it on can change things around fairly quickly to suit their wants and needs.

The wood from the raised beds can go for something else or even a bonfire, the paths will dig in and the greenhouses are simple lightweight aluminium jobs that can come down in a few hours.

Inside the greenhouse are some concrete slabs but they’re just laid onto the soil with a little sand used for levelling. Removing those and bringing the soil into use is just a matter of some digging over. Even the shed is merely laid on some bricks so they can be lifted in a matter of minutes when the old girl finally gives up the ghost.

However, some of the plots now have the sheds set on top of six inches of road stones compressed down and one greenhouse is set on a compressed stone, concrete and slabs base with a dwarf brick wall.

This high-quality permanent construction is all very well but sometime the current plotholders will move on and the new plotholder will be faced with a much harder job to bring that land back into production.

Clearing a few weeds or even a lot of weeds is par for the course when you take on a plot but removing a layer of compressed road stones is a much harder task. As for concrete bases, here we’re into hiring jack hammers to get the land back into production.

One of the worst examples on our site is a perfectly good plot that has been taken over following the previous tenant’s death. The new tenant has kept the old greenhouse but has literally used a digger to scrape off the topsoil (and removed it from the site!!) from the plot, then placed large raised beds with compressed stone and concrete paths and a large area in front just covered in stones and concrete.

I assume the new holder intends to fill the beds with topsoil but at the moment they’re just empty with some couch grass struggling up. They’ve been like this for months now. If the new plot holder has to give up at this stage, perhaps loses his job in the recession and can’t afford to finish the project, the plot is ruined.

To bring the land into production without spending on buying in soil would be a matter of years. And who wants to take on an allotment where you have to provide your own soil?

People, and especially those responsible for managing allotment sites, should remember that we only hold the plots for a time and our permanent structures can prevent someone else from enjoying their vision of growing. One man’s good solid base is another man’s nightmare.

12 comments on “Allotment or Building Plot”