Gardening in the Gales

I’ve not posted for a while – things do tend to slow down at this time of year. It’s not so much that there is not a lot to do. It’s the blasted weather stopping us getting out there. I can cope easily with cold but wind and rain …. If I ever find a solution I’ll write a book called Gardening in a Gale. Not a bad title!

We’ve also had other things going on. My builder chum Bryan from Gwynedd Restoration came over and did some maintenance on the roof. The ridge tiles needed attention and some slipped slates re-fixing. That’s the roof ready for another winter season.

In the Walled Garden 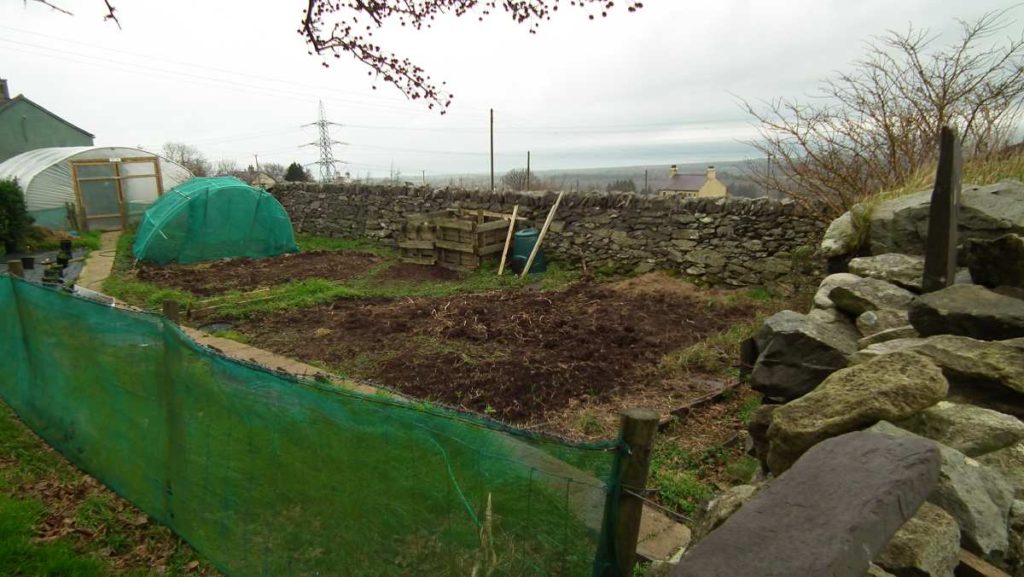 Sadly the net brassica tunnel needs re-building. After being battered by storms Ophelia and Brian it’s only standing due to willpower. The polytunnel is totally unbothered by storms, thanks to First Tunnels who certainly build them to last whatever the weather throws at them.

The walled veg plot is looking very bare now. Apart from some weeds. I’ve still got the path and a little space in front of the compost bins to attend to. Another little project is to build an insect hotel to encourage beneficial bugs.

I don’t think I’ll be digging the plot over, the potato harvesting ‘dug over’ the top anyway.
The addition of a load of manure and compost earlier in the year has certainly had a good effect. The soil is a lot darker in colour, the texture is better and the worm population a lot higher. It used to be that you hardly spotted a worm but now they’re in every forkful.

I will be liming as the soil is pretty acid. I paid a bit more for dolomite lime as the extra magnesium will most probably be of benefit. It won’t do any harm if it’s not helpful.

Raised Beds in the Field

On the other side of the house is the open field that I originally planned on being the main vegetable growing area. That was before the sweetcorn blew out of the ground and the greenhouse tried (unsuccessfully) to fly.

There are 8 deep raised beds, one large shallow bed and a large comfrey patch. I’m going to do some serious planning later this year and see if it makes sense to create another bed. 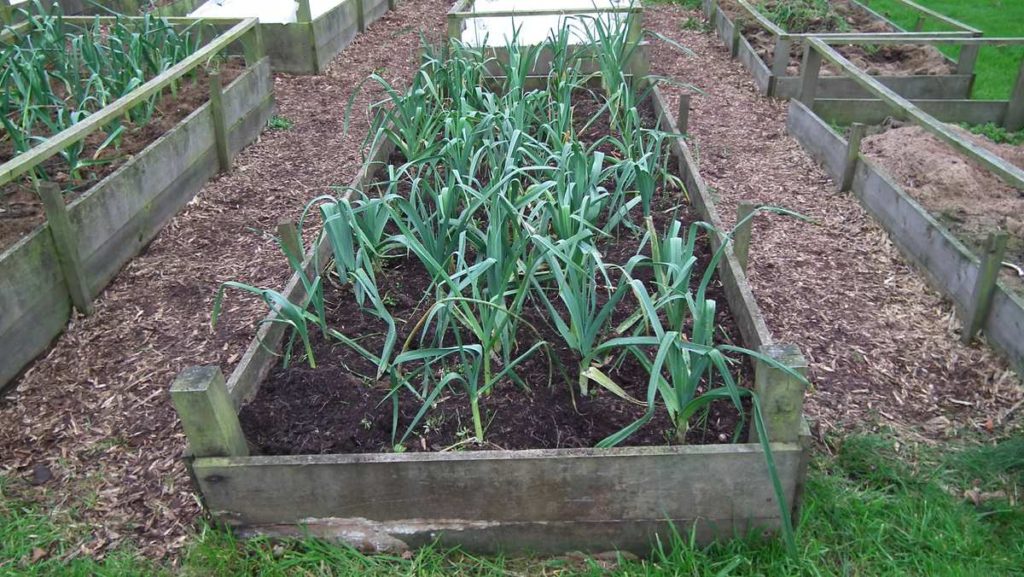 3 of the raised beds are growing leeks. I’ve been trying a new variety this year from Medwyn Williams. He’s looking at developing a show leek and I’m just after eating leeks. It seemed to be doing well initially but it hasn’t grown quite as well as I hoped.

It may be the leek variety or it may be the odd year – a wonderful super-hot July followed by a damp squib of an August and a miserable September – but I’ve had quite a few bolt (throw up a seedhead). Something I’ve not had before. 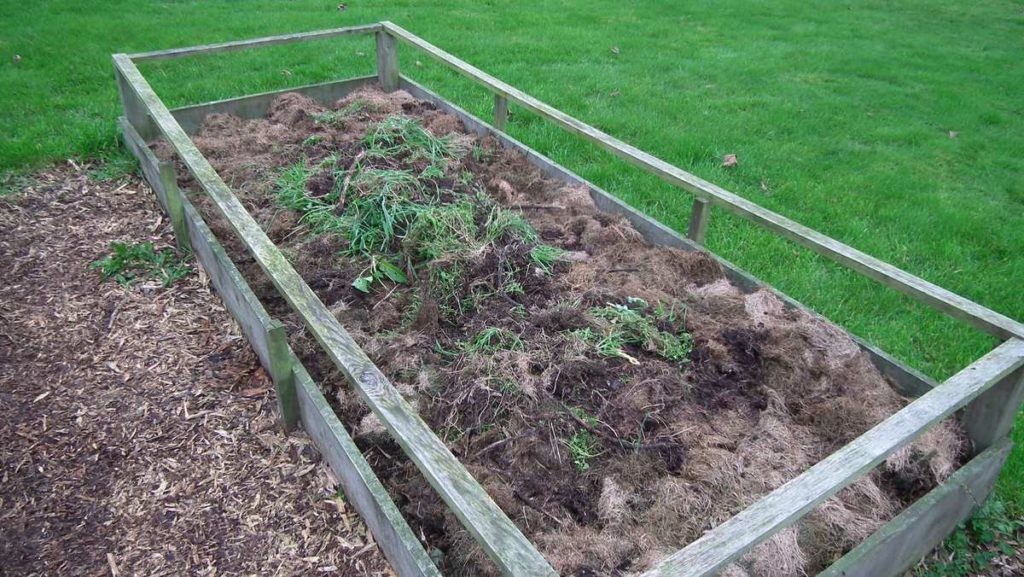 2 of the beds are empty now, mulched in grass clippings with some pulled weeds on top. A sort of sheet composting, weed-stopper. The other beds have been given over to onions, shallots and garlic. 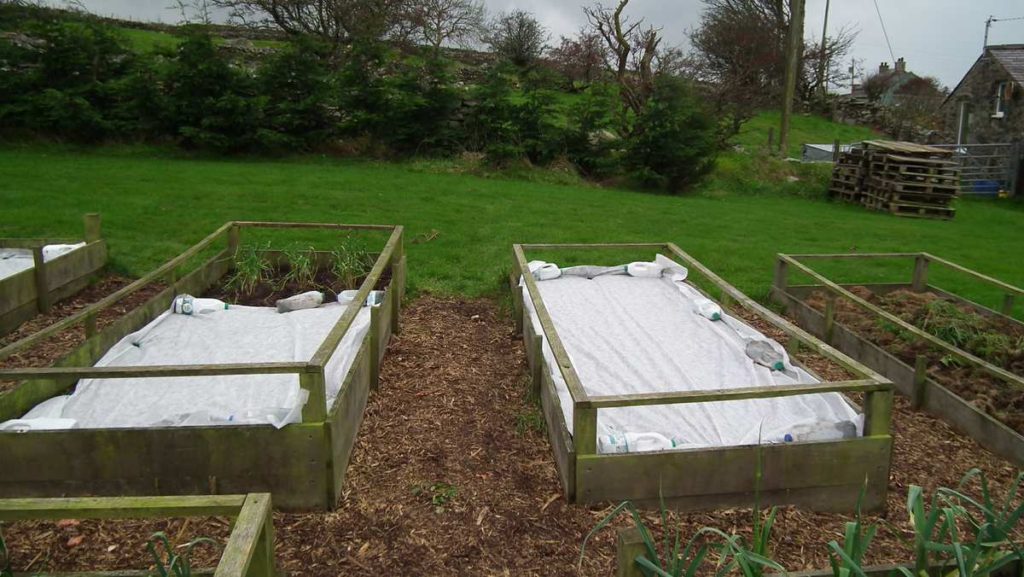 To finish off, laid horticultural fleece over the raised beds. I’d have covered the onion sets in the shallow bed too but ran out of daylight. The fleece will provide a slightly warmer microclimate to encourage the plants in the early days.

It will also stop birds from pulling things out as they sprout. We’re getting a lot more small birds around now than when we moved here. Partly because they have more trees around now but mainly thanks to the efforts of our neighbours who seem to spend more feeding the birds than themselves! 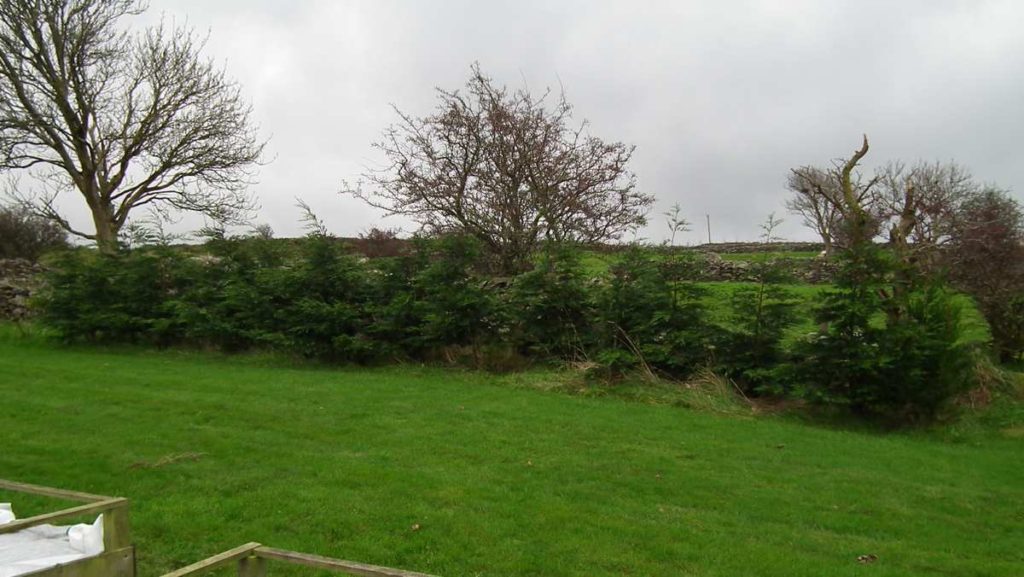 The big problem with the field beds is the wind whipping across it. I’ve planted a lot of trees, willows, alders, rowans etc but they’re going to take some years to start being helpful. There is one exception, a short hedging row of the dreaded Leylandii conifers.

In just a couple of years they’ve established and quadrupled in size. I can see me topping them in a couple of years. They’re not the nicest of plants and loathed because they’re such thugs in suburbia but I think they’ll do the job nicely of slowing the wind here.

Leave a Comment Here on Gardening in the Gales Cancel reply