Our neighbours have a contact who gives them loads of old pallets. So they drop us a load occasionally when they’ve more than they can use. These mostly get cut up and keep us warm burning in the wood stove. 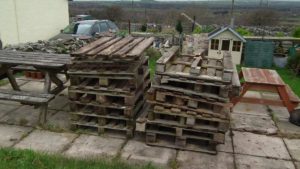 Pallets to cut up for Firewood

Incidentally cutting up pallets can be very time consuming but when my 30 year old circular gave up the ghost, I bought an Evolution circular saw. Powerful and the blade cuts through nails. I try to avoid the nails – it wears out the blade faster – but if I miss one it just goes on through.

Now when they pallets have burnt, they leave wood ash which is great for the garden being rich in potash. But pallets are full of nails which aren’t so good for the garden. I don’t suppose they’d do any harm to the soil but they’re pretty certain to end up stabbing me in the hand or through the sole of my shoe. So here’s my tip (also given to me by my neighbours) – use a magnet.

I just go through the ashes with the magnet and the nails jump onto it. Simples! 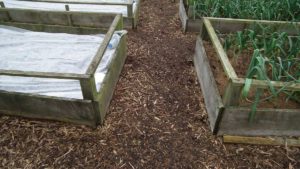 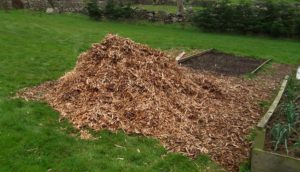 Pile of Woodchips ready to use

When we had the allotment in Crewe, the council used to dump mountains of wood chippings for us. These were great for paths. Laid a few inches think they keep the path marked, clean and near weed free.

They do eventually rot down into a rich humus which is good for the soil. If you want to move a path, rake up the fresh un-rotted top layer and dig in the lower. It could hardly be easier.

At some point I may change the bed layout. Currrently they’re raised beds 4 x 10 feet (1.2 x 3 metres) that you need to get to both sides of and have to have cross-over paths through – longer than 10 feet and it’s pain to get from one side to the other.

I’m thinking of trying beds 30” wide (75 cm) as long as I fancy. Easy enough to step over and reachable (just) from one side. I’ll maybe try one and see how it goes in practice.

As well as paths, I use wood chips in the secure chicken run which was turning into a muddy mess. The additions from the hens (dung) provide a lot of nitrogen which rots the woodchips down quickly. The humus below encourages worms which chickens like and they love scratching up the chippings so mixing everything up.

Once the wood chips start rotting, they can be transferred to the plot or compost bin and new ones laid in just an hour or two.

I’ve had a number of tree surgeons say they would drop me a load of woodchips but they don’t. I suppose we’re a bit out of the way for them. So I get my woodchips from a local sawmill. They have mountains of bark peelings to get rid of.

I could take my small trailer down but my kind neighbour goes down with me taking his huge hydraulic lift trailer and we get it filled for £17.00. I’d rather get them for free, but life is hard! 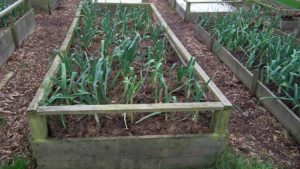 I’ve had problems with leeks bolting for the first time. I think it’s the weather this year, that really wonderful hot, dry and sunny July followed by wet cooler weather in August and September may have pushed them.

The non-bolters aren’t bad but not really as large as I’d hoped for. They got a bit swamped with weeds at one point, mainly chickweed which went down well with the hens. Turning weeds into eggs – can’t be bad!

Anyway, once weeded, I mulched around the plants with grass clippings. Didn’t have enough to mulch as thickly as I’d have liked but it seems to have helped a bit. 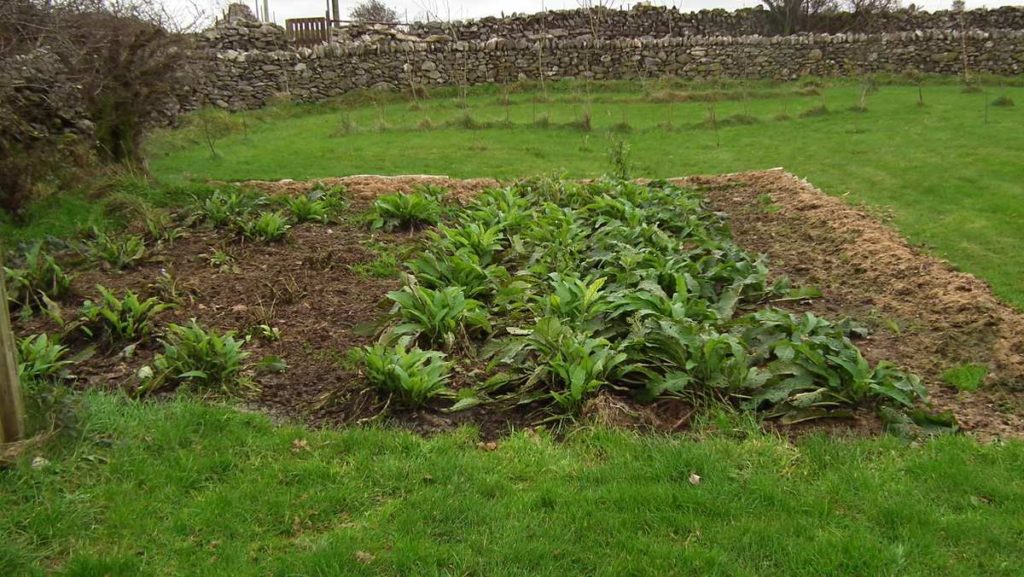 The comfrey bed’s last flush is a bit of a conundrum. Not really big enough to be worth another cut but more than expected at this end of the year. I may just let it go down naturally and the leaves will give their nutrients back to the soil.