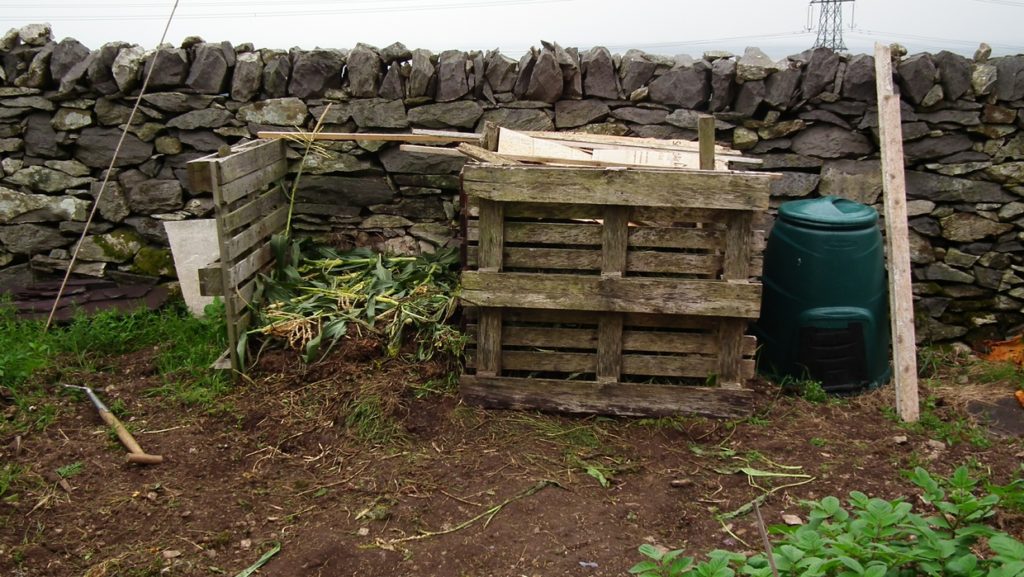 New compost heap finished and topped off with cardboard.

I took a cut off the comfrey some of which was used as the activator in a new compost heap and a cheap new gadget that helps make compost.

Took a cut off the established comfrey. Since the plants were mulched they’ve done much better without weed competition and I think next year will be in full growth. Used about a third of the cut in the building of a compost heap in the bin on the walled veg plot.

The green materials have been building up for a while. There’s the mustard green manure that was cut from the plot under the poultry patch, green waste from polytunnel, annual weeds, hedge trimmings etc.

It was topped off with a few sheets of cardboard weighed down with some wood. I expect it will be heating nicely in a few days and halved in size in a couple of weeks. Then it will need turning. 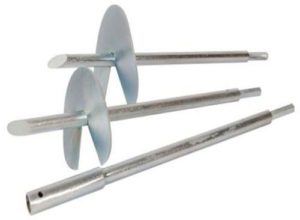 One thing composting does need is oxygen. If the heap doesn’t get any air for the microbes that do the work then it goes over to a different set of microbes – anaerobic (oxygen free) composting which also produces chemicals that aren’t good for soil ecology and growing. Anaerobic is often slimy and smelly but it can be rescued by basically re-composting aerobically (with oxygen).

Even my Hotbin composter can go anaerobic. Usually this happens when it’s needing emptying as the thickness of finished compost in the base slows the airflow to the active upper part or it just compacts due to the waste materials in there. The warning sign is when the temperature fails to reach 60ºC.

They provide a sort of stick for mixing materials and opening the heap up but I saw this auger mentioned on the net as a tool for opening up compost heaps. It was only £7.49 on Ebay including postage so I thought ‘why not?’

It comes with 2 different diameter bits that attach to a shaft that you put into a cordless drill. Seems to be very good value to me. It arrived in the post and I immediately gave it a go as my Hotbin seemed to be choking on the waste from the sweetcorn after we had our freezing session.

Drilled into the heap about five times and a couple of hours later the temperature was up to 70ºC and it was steaming away again. Still needs emptying though!

4 comments on “Composting with Comfrey”

Leave a Comment Here on Composting with Comfrey Cancel reply