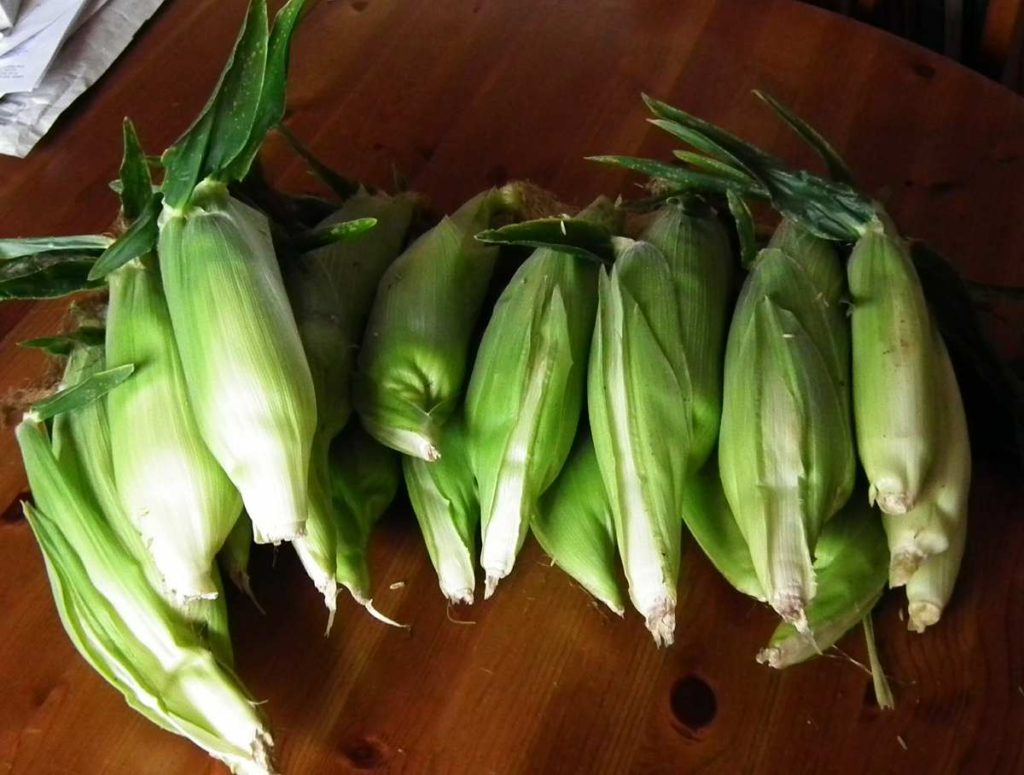 Some of the Sweetcorn Cobs that are going to be blanched and frozen.

Well it’s hard to believe it’s August, the weather has been more like autumn at times. It’s a real disappointment after that lovely hot and sunny July. Still, September is often the best summer month for us here so we live in hope!

The biggest difference this year, in fact since we moved here, has been my First Tunnels polytunnel – it’s made such a huge difference to our growing here. For a start, we live in a rather wet part of the country, indeed a wet part of the wet part. The low clouds blowing in from the sea hit the hills and dump their rain down on us.

Often the weatherman claims we’re enjoying dry weather when it’s actually raining. It doesn’t stop the plants – or weeds – growing but it does make cultivating a miserable experience. Inside the polytunnel it’s dry though.

Then we have the wind. The storms are violent enough to rip sweetcorn out of the ground and even on a sunny day, the breeze can be enough to make it chilly. Usually we’re 2 degrees at least cooler than those we literally look down on by the coast.

Today was harvesting and tidying up in the tunnel. I’ve a raised deep bed which is about a square yard in area, planted up with carrots. They easily pulled out giving me a trug near full with lovely clean carrots. Oddly, one came up white as a parsnip. A reversion, I suppose

Then the sweetcorn was harvested. I’d tried a new to me variety, Earlibird, and whilst it has done OK and the flavour is great, I can’t say it has been outstandingly productive. Good cobs but few plants gave more than one fully developed cobs whereas I’ve had two per plant from Lark which I may go back to next year.

The Firestorm runner beans have produced well and continue to do so. The beans are great, no stringiness at all!

The plum tomatoes have been a surprise. I’ve grown them outdoors before with mixed success. They’re vulnerable to bad weather, of course, along with blight but even in a decent summer they’ve never grown quite this much. I should have allowed a lot more room than I did and planted out earlier. They’re attempting to dominate the tunnel but the fruit has yet to start ripening. I’ve cut back a fair amount of foliage. At least I can get up the path now.

Next year I’ll try San Marzano in the tunnel as they don’t seem as vigorous. I might try some Roma in one of the raised beds. I’ve an idea for building a cover that will resist our winds but also be removable, possibly hinged. On the project list!

My aubergine plants are doing well but they’ve not set much fruit – so I’m hand pollinating which hopefully will give me some. They’ve been swamped a bit by the tomato behind them. A market gardener friend did point out that the pollen is sterilised by temperatures over 38ºC and a few times the temperature in the tunnel hit 40ºC in July.

Most of my Beurre de Rocquencourt dwarf French beans were swamped by another tomato plant. What a thug! In hindsight (that exact science!) I should have inter-planted the beans between the corn plants.

2 comments on “Harvesting the Polytunnel”

Leave a Comment Here on Harvesting the Polytunnel Cancel reply